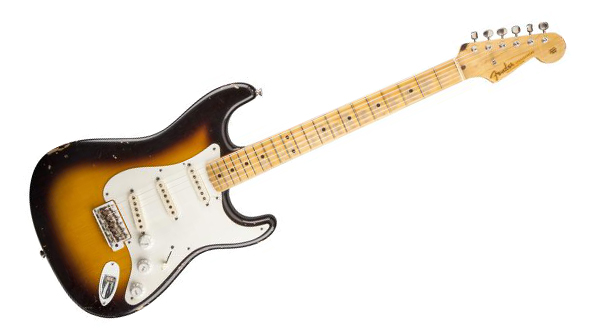 One Hundred "Layla" Strat guitars to be built by Clapton'spersonal Master Builder and sold exclusively at Guitar Center.

Fender is extremely proud to pay tribute to EricClapton's "Brownie" FenderStratocaster with the release of the Fender CustomShop Eric Clapton "Brownie" Tribute Stratocaster. It willbe available exclusively through Guitar Center on March 21, 2013,as part of the Guitar Center Eric Clapton CrossroadsCollection. The original "Brownie" is most famous for its useon seminal 1970 Derek and the Dominos recording"Layla."

Limited to 100 pieces worldwide, each "Brownie" TributeStratocaster is hand-built by Clapton's personal MasterBuilder, Todd Krause. The guitar is a meticulously crafted replicaof the sunburst Stratocaster seen on the back cover of 1970 albumLayla and Other Assorted Love Songs, and on the cover of Clapton'seponymous 1970 debut solo album. After meticulously researching theoriginal guitar at the EMP Museum in Seattle in 2012, Fender CustomShop experts replicated it in exacting detail-mirroring years ofwear and tear down to every nick, scratch and cigarette burn.

While a member of original U.K. "supergroup"Cream, Clapton bought the Stratocaster heaffectionately nicknamed "Brownie" secondhand atSound City in London on May 7, 1967, a few days before the bandflew to New York to record second album Disraeli Gears. It was thefirst Strat he had ever owned; a 1956 model with a two-colorsunburst finish and a well-worn maple neck and fingerboard. Morethan that, "Brownie" marked a move toward a newmusical identity for Clapton that would culminate in a highlysuccessful and acclaimed solo career that continues today.

"Layla" appeared on 1970 Derek and theDominos album 'Layla and Other Assorted LoveSongs.' Written by Clapton and Dominos drummer Jim Gordon, itis considered one of rock's greatest love songs and is stillincluded in countless best-of lists. The song's popularity endurestoday as a classic rock radio staple.