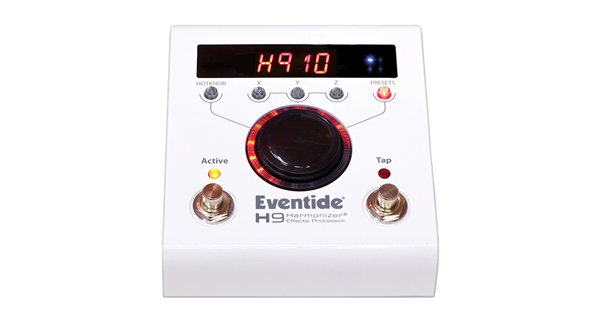 (PRESS RELEASE): Eventide announced the availability of the new SpaceTime algorithm for its award-winning H9 Harmonizer®. Artists worldwide rely on the H9 for its signature delay, modulation, pitch and reverb effects and SpaceTime is further evidence of Eventide’s ongoing commitment to provide innovative, high quality effects to help spark their creativity and expand their sonic horizons.

What’s truly new about SpaceTime is that you get to control the way these three custom-built effects interact with each other.

“SpaceTime breaks new ground for Eventide because it’s the first time we’ve combined reverb, delay and modulation in one algorithm with flexible routing of the effects,” said Nalia Sanchez, Director of Marketing Communications for Eventide.

“We’re calling it our first ‘modular’ algorithm since, while many of our algorithms contain more than one effect, SpaceTime is the first that allows you to change how they interact with each other as well as how they behave individually. It's like having three stompboxes in one.“

In addition, Eventide has created a new interface called Pedal View that gives artists a visual representation of the routing of the effects.

SpaceTime also includes standard H9 features like mix, tap tempo, expression pedal support and output level control and is available now as a $20 in-app purchase in H9 Control for H9 standard and H9 Core owners and, as always, free for H9 Max owners. Simply update your H9 Control software to see the new algorithm for yourself, try it out and hopefully solve some of the great cosmological mysteries of our time.