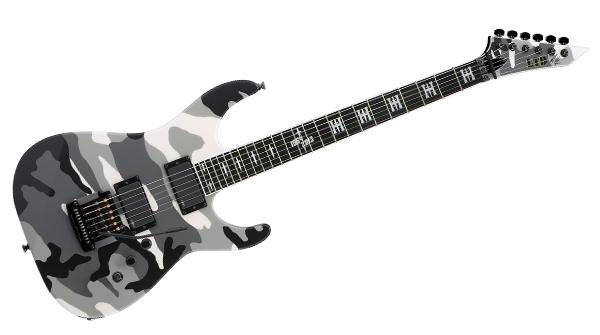 Set to be showcased at this year's Summer NAMM, ESP Guitars are rightly excited to unveil their latest models which have a distinctly metal theme. Introducing the new limited-edition LTD JH (Jeff Hanneman) Tribute 2014 Urban Camo guitar and the new LTD “Ride the Lightning” limited-edition guitar to commemorate the 30-year anniversary of Metallica’s second album.

Working in conjunction with the estate of late Slayer guitarist Jeff Hanneman, ESP Guitars introduced the new limited-edition LTD JH Tribute 2014 Urban Camo guitar at the Summer NAMM Show. The JH Tribute 2014 is based on Hanneman’s iconic “urban camo” ESP model, and a portion of proceeds from sales of the JH Tribute 2014 go to the Wounded Warrior Project, a charity that the guitarist strongly supported. Only 100 pieces of this special commemorative model will be produced.

“Jeff Hanneman and Slayer helped define the entire genre of thrash metal guitar,” says Matt Masciandaro, President and CEO of the ESP Guitar Company. “He was a good friend to many of us at ESP, and his passing last year was a shock to us all. For his family and for Slayer fans around the world, we felt that commemorating his contributions to music and supporting the Wounded Warrior Project via this new model was an appropriate measure.”

The LTD JH Tribute 2014 Urban Camo takes the unique multi-toned gray/white/black “urban camouflage” finish of Hanneman’s ESP signature guitar, and makes it available for the first time in an LTD version. It incorporates a neck-thru-body design at 25.5” scale, with an alder body, maple neck, and ebony fingerboard. As per Hanneman’s preference, the guitar includes a Kahler Hybrid tremolo bridge, and EMG 85 (neck)/EMG 81 (bridge) active pickups. The JH Tribute 2014 also features a special fretboard inlay with Hanneman’s “H Dagger” fret markers as well as a “1964-2013” 12th fret inlay, and includes a certificate of authenticity.

ESP Guitars unveiled the new LTD “Ride the Lightning” limited-edition guitar at Summer NAMM. The guitar was created to commemorate the 30-year anniversary of Metallica’s second album, which was released on July 27, 1984, and features a graphic finish that mimics the cover art of the iconic album.

“ESP and Metallica’s guitarists James Hetfield and Kirk Hammett have a relationship that goes back more than two decades,” says Matt Masciandaro, President and CEO of the ESP Guitar Company. “Last year, we successfully released a limited-edition guitar for the 30-year anniversary of their first album, Kill ‘Em All. We are happy to offer another new Metallica-focused guitar for serious players, collectors, and fans.”

ESP plans to produce only 300 of the LTD “Ride the Lightning” models worldwide, making each one a highly sought-after collectible due to its relative rarity. Its features include an alder body with maple neck (bolt-on construction) at 25.5” scale, and an ebony fingerboard with 24 XJ frets. EMG 60 (neck) and EMG 81 (bridge) active pickups are included, along with TOM bridge and string-thru-body design. The guitar also features a Metallica logo fingerboard inlay, and each guitar includes an ESP form-fit case with the Metallica logo, and a certificate of authenticity.