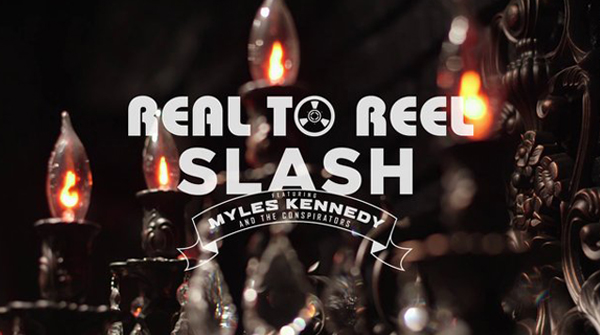 The latest instalment of Ernie Ball's online series, Real to Reel with Slash, is now available to view via Slash's official YouTube channel (or below along with parts 1 - 4).

The exclusive web series features Slash and his band, Myles Kennedy and The Conspirators, working on their 3rd album in a Los Angeles studio.

Each of volume focuses on different aspects of the recording process with 'behind the scenes' footage and interviews with everyone from drummer Brent Fitz to Slash's guitar tech, Ace Bergman.

The awesome series is still ongoing, however, you can view the first 5 episodes below.

Slash’s much anticipated third solo album will be the follow-up to 2012’s acclaimed 'Apocalyptic Love'.

Previously Slash said of his partnership with Alter Bridge head, Kennedy (via Pulse of Radio):

"We work really well together. I never really thought about how that's progressing. It's real natural. So it's like any kind of sort of close relationship, where I think we established it really, really early on and now we're just sort of doing our thing, you know. Yeah, I don't know what else to say — it's just a really cool kind of synergy that we've got".