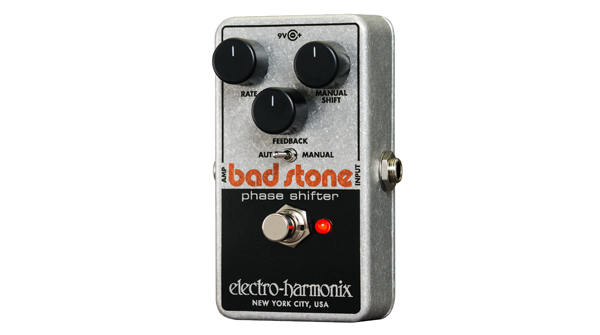 (PRESS RELEASE): With prices of 1970s’ vintage Bad Stones soaring and a steady stream of guitarists asking EHX Founder and President, Mike Matthews, to reissue the pedal, that project was given the green light. The newly minted Bad Stone is faithful to the original circuit design and three-knob control layout, but now comes in a compact nano-sized package designed to appeal to space conscious users.

The Bad Stone was the first phase shifter to employ variable feedback and features six stages of phase shifting plus a manual mode that lets the player freeze the phase. Its Rate knob controls the phase shifting speed which, in classic Bad Stone fashion, goes from a very slow swoosh to a rapid, oscillating warble. Feedback determines the depth of the phase effect and a toggle switch lets the user select Auto or Manual modes. In Manual mode the Manual Shift knob tunes the frozen phase shift sound.

In addition to the die-cast package, other modern amenities were added. These include true bypass for maximum signal path integrity when the effect is not engaged, an LED to indicate the effect status and an AC jack that accepts a standard EHX9.6DC power supply. The pedal will ship with a nine volt battery and carries a U.S.