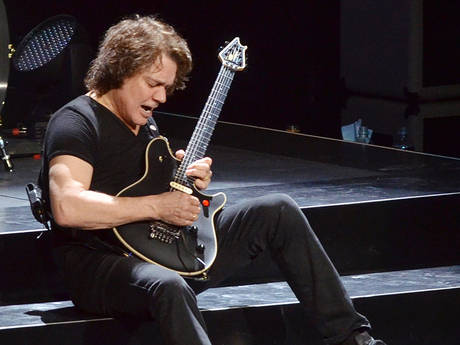 Recently, Esquire Magazine conducted an interview titled'Edward Van Halen Is Alive' in which the guitarist opened up abouthis well documented alcohol issues, his tempestuous releationshipwith singer, David Lee Roth and what it's like to play alongsidehis son Wolfgang in the new-original Van Halen line-up.

Whilst most interviews since the release of the new album 'ADifferent Kind Of Truth' have been handled by the outspokenfrontman David Lee Roth, this interview offers a refreshing insightinto Eddie's new-found energy for life and the band and a couple ofwell kept secrets too, most notably the reall story behindthe the Variac and his amp.

Here are some highlights from theinterview:

"The funny thing is, about the whole alcoholism thing: It wasn'treally the partying. It was like - I don't mean to blame my dad,but when I started playing in front of people, I'd get so damnnervous. I asked him, Dad, how do you do it?' That's when he handedme the cigarette and the drink. And I go, Oh, this is good! Itworks! For so long, it really did work. And I certainly didn't doit to party. I would do blow and I would drink, and then I would goto my room and write music."

On feeling better after getting sober:

"There was one day, I think. Because I must have laid on thecouch for a year. Just watching Law & Order.What's funny is:When I drank and did drugs, I never watched TV. Wolfie never, neversaw me watch TV growing up. I was always in the studio, makingmusic, and now, nothing. All of the sudden I'm on the couchwatching TV, going, 'This is a fucking trip.'"

On recording the new album:

"Before we decided to actually make a full record, we said,'Hey, let's do some old demos.' And we actually recorded three ofthem already. And I engineered She's The Woman, Out Of Space andBullethead, and it ended up turning into a whole record. But wefigured: Why not give fans the era that they liked, you know?"

On his son, Wolfgang, and his brother,Alex:

"I can't think of anyone more blessed than me. For one, you knowall the bullshit I've been through in my life. To have a brotherthat I've been playing with since day one, and now my son. I don'tthink anyone else in music can actually say that. I don't knowanyone who has a son and brother that they play together."

"We never really hated each other. I think the press blew thatout of proportion. He did kind of blindside us by leaving - wecertainly weren't ready for that. But we always, if we argued - youknow, now it's always about, about the structure of a song. It'snever personal. We've never on a personal level not gottenalong."

The story of the Variac and his amp:

Dave and I did an interview promo thing before the first recordcame out... The guy's going, 'We have Van Halen, a brand-new bandfrom L.A. here in the studio. So Dave, tell me' ... And here'sDave, 'Bop, bop, yabba, dabba, doo,' you know? Then he turns to meand says, I understand you and your brother, Alex, are fromAmsterdam, Holland.' And I went, 'Yeah.' Dead air.

"So afterwards, Dave goes, 'Here's what you're gonna do. You'regonna lie. You're gonna make up some shit so they don't rememberit.'...So anyway, I do my first full-blown interview with GuitarPlayer, and that whole thing is in my head.

"I had my 100-volt Marshall. I bought one through the recyclingor the newspaper that was from England, and it was set on 220volts. I didn't know. So I plugged the thing in, but I'm going,'Fucking thing doesn't work. I got ripped off.' I just let it sitthere. After about an hour, there's sound coming out, but it'sreally quiet, cause it's running on half voltage. So I go, 'Hey,wait a minute. It sounds exactly like it's supposed to all the wayup, but it's really quiet.' So we had a light dimmer in the house,and I hooked up the two leaves from the amp to the light, so I didit backwards, blew out the fuse box.

"Then I went down to DOW Radio and asked, 'Do you guys have anykind of super duper light dimmer?' They go, 'Yeah, it's all Variac,variable transformer, you know.' And on the dial you could crank itup to 140 volts or down to zero. So I figured, if it's on 220 andit's that quiet, if I take the voltage and lower it, I wonder howlow I can go and it still work... So, my Variac, my variabletransformer was my volume knob. Too loud, [makes knob turningsound] I'd lower it down to 50.

"I told people the complete opposite. I told them I raised it up140 volts. I felt so bad. I felt so fucking horrible, man. Theysaid, 'Please don't attempt what Eddie Van Halen said in the lastinterview,' because everyone was blowing their amps.'... I felt sobad. I never lied again after that."

On being tight with Dave:

"The last tour, I'd go over to Dave's room and he was all theway over on the opposite side. He kind of kept to himself. We're alot tighter. It feels more like a band, and it is more of a band.It's family to me, you know. Always has been. I think - was it theHanson press gig that we did? - where Dave just came up to me, gaveme the biggest hug and he just said, 'Your fuckin' son, man. He's amotherfucker. He's risen to the occasion and beyond.' That made meproud."

You can read more of Eddie Van Halen in Esquire here.

The newly added dates are as follows: