DWEEZIL ZAPPA RETURNS TO THE UK 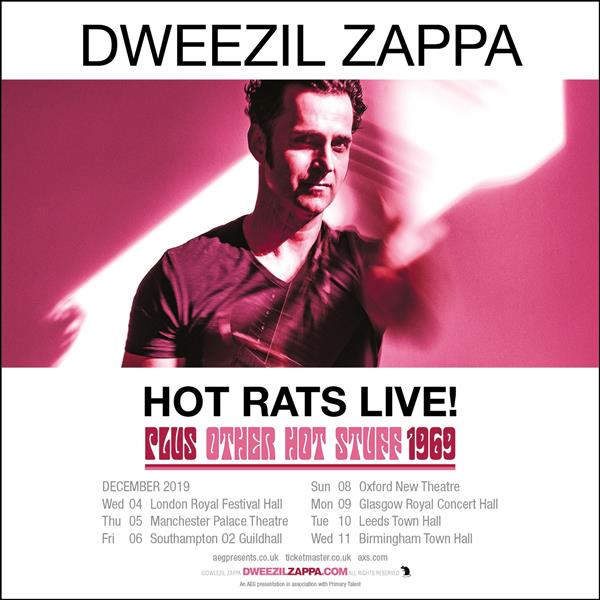 TICKETS ON SALE FRIDAY AT 10AM

US guitarist Dweezil Zappa will be returning to the UK this December with his Hot Rats Live!Tour. Shows will take place in London, Manchester, Southampton, Oxford, Leeds and Birmingham. Tickets are on sale now here.

Dweezil Zappa and his “rocking teenage combo” will be performing his father Frank Zappa’s entire “Hot Rats” album in sequence live on stage as part of his upcoming 2019 tour. Dweezil has long undertaken a mission to re-acquaint the world with the sights and sounds of his infamous father and the incredibly talented group of musicians revive Frank’s music in a fresh context, whilst keeping true to Zappa Snr’s unique and impeccable sonic heritage.

Zappa can’t wait to be returning to the UK: “ We have always enjoyed presenting Frank’s music to audiences in the UK. This tour gives us the opportunity to perform ‘Hot Rats’ as well as other material from his huge body of work that is still as alive and relevant today as it was when it was composed.”

Hot Rats album played a pivotal role in establishing Frank Zappa as a composer and guitarist and was also dedicated to the new-born Dweezil upon its release in 1969. The 50-year-old classic album will be surrounded by an assortment of other psychedelic, avant-garde odd metered toe-tappers well known to Zappa aficionados as well as being equally exciting for music fans new to his music.

Don’t miss out on Dweezil Zappa’s unique recreation of “Hot Rats” and other “Hot Stuff” this year!