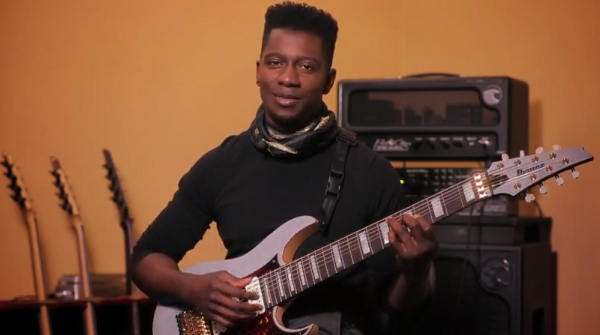 It has taken DiMarzio nearly two years to develop the pickupsTosin Abasi envisioned because Abasi wanted them to be capable of awide range of sounds.

The Ionizer 8™ Neck Model (DP809) is warm and open like avintage humbucker, solid and tight like a modern metal pickup, andperforms like a classic single-coil in split mode. It's unusual fora player to request a humbucker with the single-coil sound asimportant as the series humbucking sound, but Abasi was clear onthis point. The split mode has lower resistance than a vintageStrat® 6-string pickup in order to let the 7th and 8th strings stayclean, but all the other specs nail the classic Strat® sound.

DiMarzio specifically created the Ionizer 8™ Middle Model(DP810) single-coil to work with the Ionizer 8™ Neck and BridgeModels. It's clean, bright, and well-balanced. Although itsconstruction bears little resemblance to a vintage 6-stringsingle-coil, it performs similarly. Treble response is brightwithout being thin, and bass response is clean and solid.

When Abasi described what he wanted for the Ionizer 8™ (DP811)humbucking Bridge Model, he said it is all about the mids. 8-stringguitars have extended low-end response, and the mids need to powerthe bridge position so the sound doesn't wash out. It also needs tohave enough output to overdrive an amp without making the soundmuddy, and enough headroom to clean up when the volume is rolleddown.

The long scale length of an 8-string guitar can make the soundof the unwound strings brittle, but the Ionizer 8™ Bridge Model hasa low resonant peak that warms them up, and the high E doesn'tsound thin, even at the upper frets.

For more information about Ionizer 8™ pickups, visit theirwebsite at www.dimarzio.com.