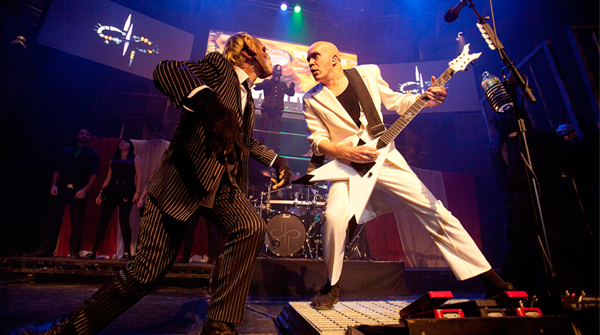 The recent release of Peavey artistDevin Townsend's fifteenth studio album and fifthalbum in the Devin Townsend Project series; 'Epicloud' can  bedescribed as going between schizophrenic heavy metal, country tomelodic hard rock all on the same disk.

The album joins Townsend's illustrious body of work includingthe likes of The Devin Townsend Project, Strapping Young Lad and anumber of production credits; Darkest Hour and Lamb of God to namea few. With Townsend's daring reputation it was no surprise thatfans of the extreme singer songwriter were excited to be apart ofhis 'Retinal Circus' show. The gig, which took place October 27thwas in London's Round House and featured material from'Epicloud'.

The monumental gig, which was labelled the most definitive'Devin' show to date, was a culmination of his nearly his entiremusical career with a full supporting cast and star studded lineup. This included Jed Simon from Strapping Young Lad on guitar anda narration by Steve Vai on three big video screens.

The gig, named after an old club famous for psychedelic rockshows, showed to be more than just a music performance, with up to20 people taking to the stage at any one point. Including the likesof fire-dancers and stilt-walkers, all adding to the 'circus'nature of the show.

Throughout the visually busy show Townsend regularly used hissignature Peavey guitar, the Devin Townsend PXD. Allowing him tocreate the heavy metal tones through the performance with the7-string baritone. Although his performance ranges from screamingto opera-like singing, Townsend's musical style is rooted in metaland his Peavey Devin Townsend PXD guitar allowed him to get themenacing rhythm and lead tones needed for such a uniqueperformance.