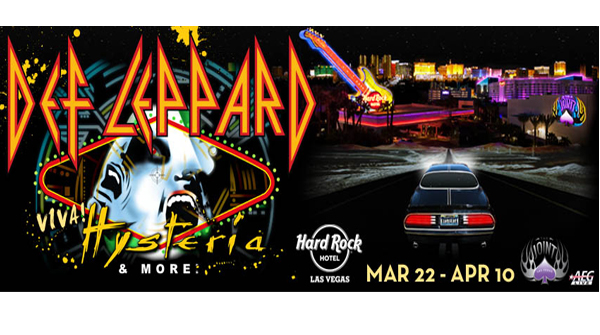 Def Leppard will become the latest band to take up aresidency at the Hard RockHotel and Casino Las Vegas next year.

The three-week run at one of Las Vegas' most famous Casinos willfeature nine shows by the hard-rock outfit that will include sometheir greatest hits, as well as their 1987 live album'Hysteria' in its entirety.

Kicking off on March 22nd the band will perform on Friday,Wednesday and Saturday nights through until April 10th at the Jointinside the Hard Rock Hotel and Casino.

"We've never done anything like this before in our entirecareer so the opportunity to do something completely different likethis, in such an iconic setting, is very exciting and something wejust couldn't say no to," singer Joe Elliottsaid in a band statement.

Tickets go on sale Nov. 16 through Ticketmaster or the Joint'sofficial website. Thereare a number of VIP packages available through the band's website,but the cost of single tickets begins at $49.50.

Def Leppard will join a growing list of acts thathave taken up residency at the renowned venue. On HalloweenGuns N' Roses began a 12-show residency at TheJoint and earlier this year Motley Crue completeda 12 night stint at the same venue.

We caught up with Def Leppard's PhiCollen in Issue 3 of GuitarInteractive Magazine to find out a little more about one ofrock's survivors. See Stuart Bull's video interview with the hardrock legend below.