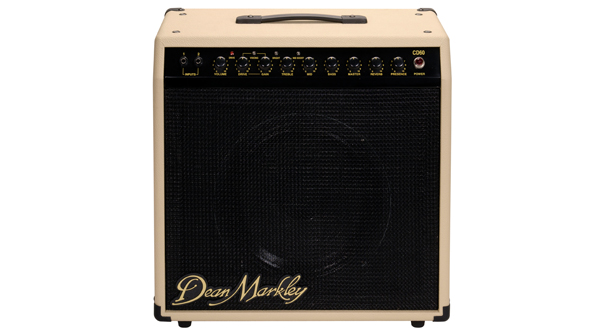 For the past three decades, the Dean Markley CD30 and CD60 tube guitar amplifiers have been used and sought after by studios and elite guitarists around the world. Due to their limited production runs over the years, they have been hard to come by but their high headroom clean channel and warm lead channel have made them a go to choice for artists such as Eric Clapton, Alex Lifeson, Andy Summers and many others. 2014 marks the 30th anniversary of these amps and Dean Markley has committed to full time production to celebrate the occasion.

Both amplifiers are available in single 1x12 combos only and feature two inputs with a volume control, separate drive and gain controls for voicing flexibility, treble, mid and bass controls, master volume, reverb, presence and channel switching. A red jewel light and additional LED’s on the front panel make it easy for players to know where they are when playing on stage.

The rear panel provides maximum flexibility to accommodate either live or studio performances. Power features include the AC input, a power toggle switch, a standby switch and 4 or 8 ohm speaker selection. Signal options include a footswitch input for channel changing and reverb on/off, send and return level controls, a send/return effects loop and a separate pre-out to control auxiliary units.

Find out more at: Dean Markley