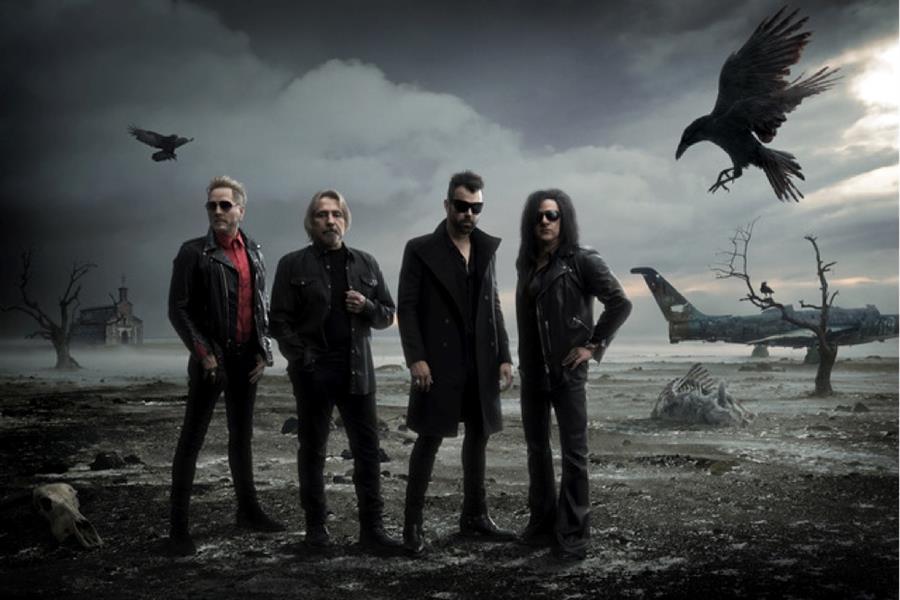 DEBUT SINGLE “DOWN IN FLAMES” OUT NOW

“DOWN IN FLAMES” VIDEO

Deadland Ritual promises the live shows will be something special, mixing the original material with deeper cuts from their collective past. “Not the typical songs you would expect,” according to Matt Sorum. Two extra dates in the UK are added below in red:

To purchase tickets and for further updates visit:   www.deadlandritual.com

Late 2018 saw the band release their debut single, “Down In Flames” (via Sonik Riot Recordings / AWAL powered by Kobalt). Produced by Greg Fidelman (Black Sabbath, Slipknot, Metallica), “Down In Flames”features the lush and powerful vocals of Perez, alongside Stevens’ signature thundering guitar conjugating with the hard-driving tribal rhythm section of Butler and Sorum. The single has been A listed on Planet Rock radio in the UK for six weeks and counting.

Sorum’s longtime friendships with Stevens and Perez helped to form the initial core of the lineup, but it was a pivotal moment when Butler agreed to join. Butler admits there was a lot to think about when he got the invitation. “I had to get used to the idea of starting from scratch again, which is good,” he says. “But I really liked the music I was hearing. It’s not your typical hard rock or metal stuff.”

For Stevens, it was a revelation the first time he found himself recording with Butler. “There's a lot of times in the studio as a guitar player, you get a guitar sound and you're trying to make it work, tweaking it,” Stevens says. There was none of that bullshit. It just fit against his bass sound and it was really exciting to me. I get to hear my guitar against a bass guitarist that I've idolized forever."

Drawing inspiration from the ritual symbolism of desert badlands paired with Sorum’s love of the idea of a ‘ritualistic forgotten space,’ the name Deadland Ritual felt appropriate for the darker tone of the music the group was making.  “Obviously we’ve been through some stuff,” Perez says. “If you’re being honest artistically, all the turmoil of love, loss, happiness and pain in life makes its way into the music.”

The initial recordings are only the beginning of what fans can expect in the coming months. The band is focused on quality vs. quantity and letting the muse carry them in the appropriate direction. With festival appearances booked and headline dates now announced, they’ll use the time leading up to that trek to continue writing and recording…