Coldplay Recreate Back to the Future scene with Michael J Fo 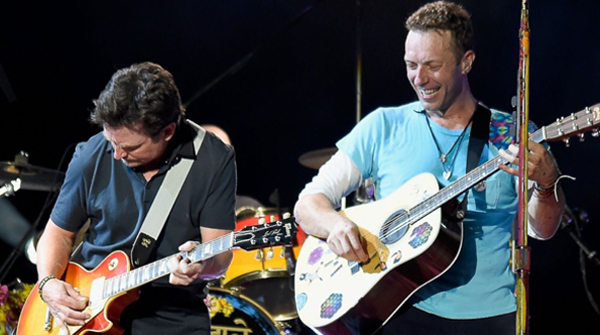 Coldplay recreated an iconic 80s movie scene this past weekend during a show at MetLife Stadium in New Jersey on Saturday night.

The outfit, who are currently touring the US as part of their Head Full Of Dreams tour, invited Michael J Fox on stage to perform 'Johnny B Good' following a rendition of 'Earth Angel' by Marvin Berry & The Starlighters. Michael promptly joined the band onstage with a stunning Gibson Les Paul in his grasp.

The tribute was for Chris Martin's son, Moses, who appeared on screen during the show to request his Dad and band mates perform a song from their favourite film.

After the surprise performance of 'Earth Song', Coldplay then asked the sold out crowd;

"Would anyone like us to do one more song?"

Michael and Coldplay then tore into a performance of the Chuck Berry number in homage to Marty Mcfly's epic school dance scene from the 1985 film.