Classic Rock Legends Wishbone Ash 'Take It Back' on North Am 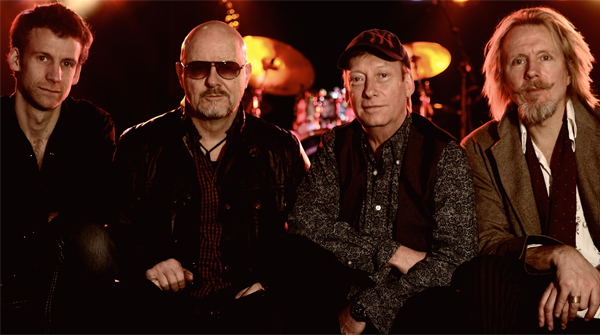 Wishbone Ash, one of the most influential guitar bands in the history of rock, bring it to their North American fans on the 2016 “Take It Back” Tour. As they celebrate their 47th anniversary at shows from Denver, CO, to New York City, the guys will present time-honored classics and deep tracks from the back catalog, as well as material from recent recordings.

“We'd like to mix it up a little,” says founding member Andy Powell. “Perhaps include a different epic instrumental, dust off a couple of the old harmony-driven songs, feature an unexpected track from our latest album, 'Blue Horizon.'”

Formed in 1969, Wishbone Ash finds itself in rare company these days. Not many bands are still going strong after nearly 50 years. It takes a serious lifetime of commitment to the craft of making music; but, more importantly, real skill is required to navigate the shifting seas of the music industry, and few know that better than Powell.

“We laid down strong musical roots in the '70s, and these roots continue to prove productive,” he says. “Also, we nurtured our fan base as much as possible through fan club conventions, newsletters and the like; but this was all given a great boost once the digital age came into being, with websites and social media.”

Wishbone Ash is led by Powell on guitar and vocals, trading licks with Finnish guitar master Muddy Manninen. Bassist Bob Skeat, an 19-year veteran of the band, sets the pace with Joe Crabtree, one of the best of Britain’s new breed of drummers, himself an 8-year Ash veteran who also handles a lot of the band's tech requirements.

Through the years the band has delved into various musical genres, from folk, blues and jazz to pedal-to-the-metal rock and electronica. Whatever the style, Wishbone Ash’s hallmark is the distinctive twin-melodic lead guitar interplay that has influenced such bands as Thin Lizzy, Lynyrd Skynyrd, Iron Maiden and, more recently, Opeth.

True road warriors, each year the band logs around 30,000 miles, roughly equivalent to circumnavigating the earth.

“The hours, days and weeks we spend touring and recording results in a close-knit group, for sure,” says Powell. “It allows us to bring a level of intensity to the table that people seem to pick up on and appreciate.”

The fruitful results of near-constant touring are evident on the latest DVD release, “Live in Paris,” recorded in May 2015 during a three-day residency at Le Triton Theatre in Les Lilas, Paris.

Powell says, “We recorded three nights of material, including current versions of some classic songs, plus some deep tracks that people won't necessarily expect.”

“Our concept was to root my musical story and that of the band's to the times in which I came of age,” says Powell. “That is to say, relating it to those times, decade by decade, so that the reader could get a picture of how I was impacted by the social and musical trends and how I weathered those changes. We also wanted to keep it breezy and poke a little fun at this music game at the same time.”

There is no other rock band in history that has done more with the twin guitar concept than The Ash. Be sure to catch them on the Take It Back Tour this September. Tour dates and more information can be found at www.wishboneash.com.