Catfish and the Bottlemen and the sE guitaRF 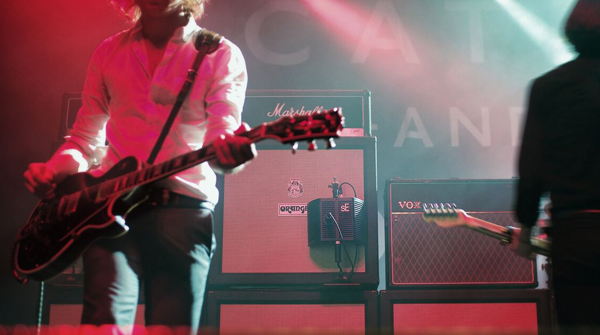 Catfish and the Bottlemen, the hugely popular guitar-driven UK rock band, have just finished a fast and heavy tour of the US. On this tour, their FOH engineer Mike Woodhouse took his new guitaRF® Reflexion Filter® from sE Electronics on the road for the first time, and is immensely pleased with the results.

Woodhouse says, “I've been using ribbon microphones on guitars for some time, and due to the nature of my ribbon microphone of choice, I've always end up picking up a lot of unwanted stage noise from its figure-of-eight pattern.” He initially tried to combat this by taping up the rear of the microphone, which he said was somewhat effective, “but that changed the tone dramatically, and for the worse. This is when I got thinking about either ditching the microphone altogether, or using something that would help reduce noise whilst keeping the tone intact - which brings me to sE.”

Initially, Woodhouse considered bringing along sE’s RF SPACE, as he’d used it in studio situations for this purpose. However, “it would have been too big and cumbersome to take on tour.” After a bit of browsing he discovered the guitaRF, designed by sE after seeing their Reflexion Filters on stage amps for artists including Tom Petty & The Heartbreakers, Paramore, and My Morning Jacket.

“It looked like a perfect contender for the job. Small, touring-friendly and I could even double-mic my guitar cabs too…winner! The design is lightweight yet extremely robust; it can be dismantled for touring with ease and does the job to absolute perfection.” Woodhouse now uses a total of three guitaRFs on all of the band’s main guitar cabinets.

“In the past I’ve had trouble getting the guitars sitting nicely on top of the mix due to the stage noise, but with these filters I can get the boys’ guitars screaming over any PA without worry of feedback or unwanted stage noise coming from out front. The beauty of having the rubber grommet in the center of the filter means I can keep both my microphones in the same position, knowing they won’t move or be aligned slightly out of phase, ever!”

“All in all, sE have created something for the live market that should be in practice for every touring band. I mean, why wouldn't you want studio sound quality in an entirely live sound environment?”