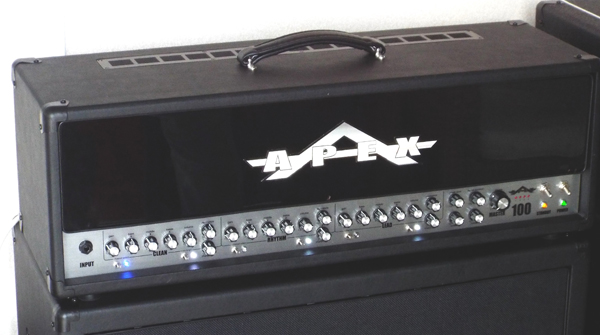 Like nothing that has come before it, APEX is an all-new “feature rich”, 100 watt head design, boasting an astounding sonic palette, outstanding power and grunt, and a unique dark and beautiful lacquered wood finish that distinguishes it from afar. The backstage demo room provided the opportunity for the assembled metal head musos to get hands on with the APEX; seen and heard for the first time outside of the company’s UK workshop.

A 3-channel all tube head design, all three channels feature independent Gain, Volume, Bass, Middle and Treble, plus Resonance and Sharpness controls. Each channel, additionally, features two ‘modes’; on the Clean channel these offer a “darker” and “brighter” tonal change, while on the Rhythm and Lead channels these activate an additional gain stage. Master / global controls include Master Volume, Boost Level, Reverb, Power Control and Halite. Valve ‘indicator lights’ – on both the front and back panel of the amp head – flash to warn if the amp not connected to a load or will indicate if a valve blows, highlighting which one. If a valve does blow, the amp automatically switches to 50 watt operation, continuing to work.

The footswitch features switchable ‘direct’ and ‘programme’ operation, while the rear panel features an effects loop with Mix control; on centre detent this works in parallel and when completely ‘Wet’ in series. There is also a rear panel 100 / 50 watt operation selector switch and Line level input for external playback / MP3 devices, as well as XLR balanced and ¼ inch unbalanced Line level outputs for recording and / or PA feeds, featuring switchable Dry and Emulated ‘speaker cab’ signals; additionally the jack output incorporates a headphone compatible output signal. Carlsbro states that pricing is going to be especially competitive, coming in at well under a £1000 for such a well specified, high performance head.

Speaking backstage at Bloodstock, on the public debut of the company’s new amp, Carlsbro & Studiomaster Marketing Manager Patrick Almond stated, “It’s not the usual custom to launch product at a music festival – and it’s the first time Carlsbro has ever done so – but then this is no usual amplifier. This is Carlsbro’s first ground-up new design for many years – and I think it is fair to describe it as the first Carlsbro super amp. This amp has an unprecedented rich feature set, as well as truly outstanding sonic performance. And it will come to market at a truly unprecedented price point.

“Our primary purpose in sponsoring Bloodstock – the first festival we have been involved with – was to facilitate the launch of APEX, previewing it directly to frontline artists en masse. Bloodstock represented an ideal opportunity to achieve that and the backstage reaction to the amp, with a constant stream of guitarists from performing bands, proved the success of the idea. We will definitely be back next year and doing this more often.”

As a joint major sponsor with the UK’s leading metal monthly, Metal Hammer magazine and Hobgoblin beer, Carlsbro supplied backline EVO guitar and Viper bass amplification for the Sophie Lancaster, New Blood and Jaegermeister stages at the event. Additionally, an EVO50DC head and 4x12 cab was in use with 'Cynosure' custom guitars in the Bloodstock Open Air 'Gallery' and another EVO50DC head with 2x12 cab was used by Ten Foot Wizard in the Serpent’s Lair VIP bar.