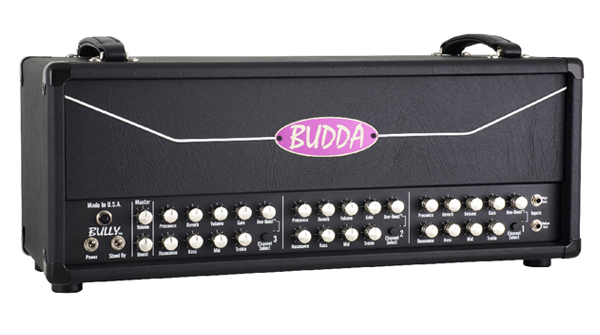 “The Bully is the ultimate amplifier for the studio or touring musician,” said Fred Poole, Budda General Manager of Product Development.

“You want every tone you can think of in one amp? This is it. Plus, the build quality represents a new level of reliability for boutique tube amplifiers.”

The Budda Bully also features a ½ power switch for operating the amplifier in either ½ power or full power mode. Using the ½ power switch along with the PowerPan feature allows the output of the amp to vary between 25 and 120 Watts for amazing versatility. The Bully even contains a backup rectifier tube in case of tube failure.

Each channel also features a footswitchable lead boost called Over-Boost that is 100% tube driven. The back panel features an amplifier chain section with a power-amp in/preamp-out jack and a slave output, impedance selector and MIDI in/through for use in professional MIDI switching rigs. The rugged Bully can withstand years of hard touring with its high-quality and built-for-the-road construction.

With high-level features and an almost endless array of tones, the Budda Bully can suit the needs of today’s most versatile players.