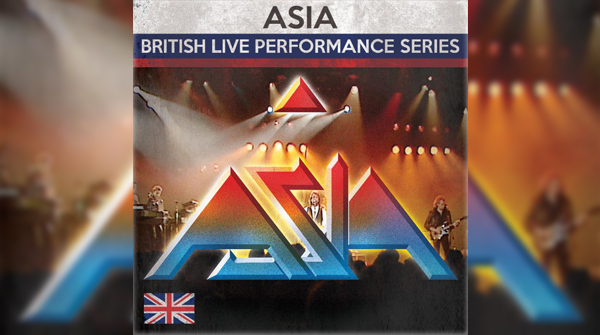 (PRESS RELEASE): The British Live Performance Series from Rainman Records is set to release a hit-packed live album from 80's supergroup Asia.  This release marks the British Live Performance Series' eighth installment, with previous live sets from Glen Campbell, Joe Jackson, Belinda Carlisle and more (see below).  Due out June 24, the album celebrates the legacy of the band which debuted in 1982 with their quadruple-platinum eponymous LP.

Formed by musicians who were already established stars in their own right and with early-Eighties rock music in a post-punk, post-disco turmoil, the seasoned quartet sailed in to fill the gap. Each member each came with a proven pedigree from Seventies megabands King Crimson (John Wetton), Emerson Lake and Palmer (drummer Carl Palmer), Yes (guitarist Steve Howe) and Buggles (keyboardist Geoff Downes). But it was the excellence of their music that sold millions of records worldwide.

Rock history records Asia as the first supergroup of the Eighties, a leviathan that sold more than six million copies worldwide of its eponymous first album in little more than a year thanks to a combination of classic radio-friendly pop songs and virtuoso musicianship. Recorded in 1990 in Nottingham, England, the album finds the group in epic form. Founder members John Wetton, drummer Carl Palmer and keyboardist Geoff Downes link with guitarist Pat Thrall to present a live greatest hits, from the three major singles - "Heat Of The Moment," "Only Time Will Tell" and "Sole Survivor" - from their first album through to later highlights Go and Voice Of America.  With the help of label boss David Geffen and manager John Kalodner, the band would become one of MTV's biggest stars then, and a classic rock staple now.

Our show captures Asia at their best - in concert, where their virtuoso musicianship can be best appreciated. No studio trickery is needed to recreate the music for which the band is rightly known. Defiantly rock-based anthems like "Time Again" and "The Heat Goes On" that had illuminated the sterile, electronic Eighties remained relevant in a new decade. As Carl Palmer put it, this was - and is - "English rock with a technical side - sophisticated rock mixed in with melodies and singles."