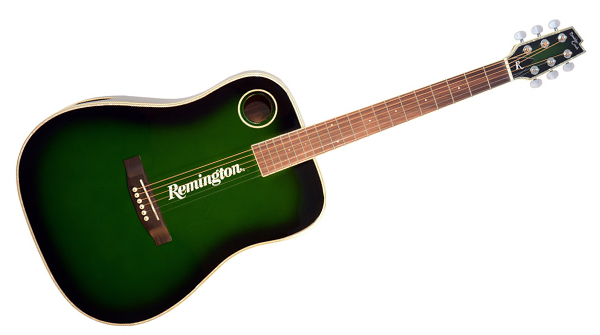 Gary Keffer, Director, Media & Partnerships at ROC, said, “Guitars are a natural fit for Remington, because so many outdoorsmen and women are musicians and music lovers. I can picture sitting around the campfire after a day in the field and happily strumming a Remington guitar or listening to one of my campmates play for us.”

The collaboration resulted from a song by Boulder Creek artist Larry Gatlin titled, “An American With A Remington.” Mr. Gatlin made a short video performing the song on his Boulder Creek guitar. The video went viral and was viewed by millions.

Keffer saw the video, recognized the guitar and contacted Boulder Creek CEO Jeff Strametz. After initial talks, the two companies entered into a licensing agreement and the Remington line of guitars was born.

“We are excited to be working with Remington and bringing music to their audience of outdoor enthusiasts,” remarked Mr. Strametz.

The guitars will be available summer 2015. Consumers will be able to purchase the guitars through authorized Boulder Creek dealers. Visit the Boulder Creek website for more details and to sign up to be notified when the guitars become available. The company also welcomes dealer inquiries. http://www.BoulderCreekGuitars.com/remington