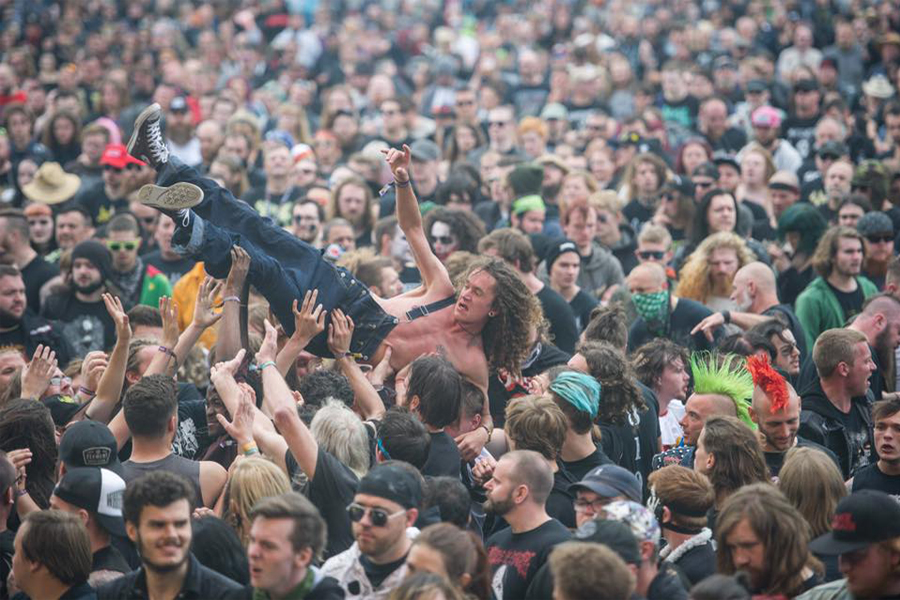 Bloodstock Open Air, the UK’s premier metal festival, made a welcome return to the picturesque Derbyshire countryside this past weekend in the most brutal of fashions.

B-O-A 2017 had everything, good weather, great people and some of the best acts and bands from the worlds of death metal, thrash metal, black metal, hardcore, deathcore, grindcore, doom metal, progressive. That’s not to dismiss any other musical genre which prompts its fans (man, woman, old and young) to raise the sign of the horns in appreciation.

In case you weren’t able to attend a few of the Gi digital team made the trip from London down the M1 to catch up with old friends and new whilst at the same time checking out some incredible music in order to report back to you guys in a future free, digital issue of Guitar Interactive Magazine.

Although for now we’ll share with you our top performances at Bloodstock Open Air 2017.

Whist the Connecticut metalcore outfit split opinion when they first appeared at Catton Hall five years ago, Jamey Jasta and crew certainly made an impact this year. And whilst some may still question their main-stage credentials, Hatrebreed’s Saturday slot was up there with one of the best to be seen all weekend.

The Sophie Lancaster tent provides a stellar mix of old and new bands offering a platform for many to prove their status with the hope of returning one day to play the Ronnie James Dio main stage. Kent doom metallers Bossk done everything that was needed to prove their potential and the hordes that spurred the main stage act to cram into the Sophie Lancaster tent catch the six man outfit perform their latest album ‘Audio Noir’ would undoubtedly agree.

Opening up festivals can be a tricky business especially when the ever precarious UK weather is at its most unpredictable. Lucky for Bloodstock attendees the technical astute Fallujah didn’t just bring their darkest, death-metal A-game but also the Californian sunshine and a brand new frontman to replace the recently departed Alex Hofmann.

As one of the most anticipated bands at this year’s B-O-A, Kreator had everything to play for. The German thrash veterans are no strangers to the festival circuit and they knew exactly how to get a crowd going. A mix of tracks from the band’s sprawling back catalogue of 14 albums underpinned an electrical performance that certainly didn’t disappoint the deluge of fans that rushed to watch them following the last track of Ohhms set at Sophie Lancaster

Whilst Amon Amarth have performed B-O-A a number of times down the years, 2017 was to be their first set as a headline act, and boy was it worth the wait. If band t-shirts this year were anything to go by, then Swedes were the people’s champions closing the Friday night with their caustic brand of Swedish melodic death metal. It was a fitting close to the first day as Johan, Olavi and company set an incredibly high bar and laid down the gauntlet for the likes of Ghost, Testament and Megadeth.

There’s always something going on backstage at B-O-A. This year in their ever increasing search for quality guitar content, the guys at Epiphone invited a myriad of players to perform a quick shred in-front of the camera. Whilst the entire ‘shred cam’ experience can be viewed via any of Epiphone’s social media channels we thought we'd share our favourite ‘shred’ of the weekend which happened to come from Gi contributor, tutor and Sons of Arcadia head, Nick Jennison.