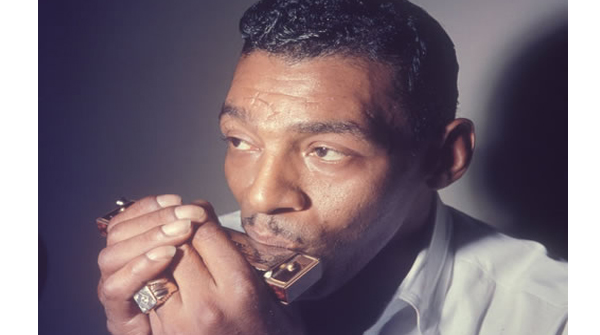 The virtuosic Little Walter is without doubt one of the mostinfluential blues harmonica players of all time. AllMusicGuidesaid, "The fiery harmonica wizard took the humble mouth organ indazzling amplified directions that were unimaginable prior to hisascendancy. His daring instrumental innovations were so fresh,startling, and ahead of their time.  His influence remainsinescapable to this day -- it's unlikely that a blues harpistexists on the face of this earth who doesn't worship LittleWalter."  The idea for the Little Walter tribute recordinggrew out of a number of highly successful West Coast concerts inearly 2012 that were part of an ongoing series of "Blues HarmonicaBlowout" concerts organized by Hummel, who will serve as producerof the recording project, to be entitled Remembering LittleWalter.  Said Hummel, "Walter changed all the rules and raisedthe bar so high that nobody has yet surpassed him either ininnovation or technical prowess.  Walter's original sides havebecome the holy grail all other harpers are still trying to aspireto."

Those sentiments were echoed by Charlie Musselwhite and BillyBoy Arnold, who both  knew and were friends with LittleWalter.  In fact, both used Walter's backing musicians (Louisand Dave Myers, Fred Below, and Luther Tucker) in their own bandsin the 60's and early 70's.  Musselwhite said, "If you listento Walter's earliest recordings you can see that he came from adown-home country style much like John Lee "Sonny Boy"Williamson.  And then, probably with the urban influence ofChicago horn players, started phrasing like a saxophone.  Thisphrasing combined with his creativity and amplification really tookharmonica playing to a whole new level that hadn't been heardbefore.  For me personally, besides Walter's being aninfluence, he was even more of an inspiration; an inspiration andinvitation to experiment, take chances, see where it'll take youand to always follow your heart."  He went on to recall,"Walter was always real nice to me. He'd give me a ride home afterthe gig or sometimes he'd walk with me to the bus stop and waituntil the bus came. He was always acting like he was looking outfor me; like he was going to be there if somebody started somenonsense with me."  Billy Boy Arnold added, "When I heardLittle Walter's harmonica playing on the recordings with MuddyWaters and others, I knew that Little Walter was the new HarmonicaKing.  I bought every record that Muddy Waters made withLittle Walter's harp playing on it.  He was miles ahead of allthe other harp players on the scene.  No one could touchhim.  He was creative, innovative, and spontaneous. Little Walter is still the top and most influential harp playerthat ever played."

CHARLIE MUSSELWHITE, is one of the mostrecognized names in blues harmonica. Born in 1944, Musselwhite hastraveled the long road from backwoods Mississippi to a teenagedupbringing in Memphis, where he first heard and learned the bluesfrom its originators. On the South Side of Chicago, Charlie servedhis apprenticeship with Robert Nighthawk, JB Hutto, Johnny Youngand Big Walter Horton and developed close friendships with bluesicons Little Walter, Sonny Boy Williamson, Big Joe Williams, MuddyWaters and Howlin' Wolf.  In the late 60's and mid '70s he andPaul Butterfield were very influential in introducing traditionalblues to white audiences and the burgeoning scene of young rock androllers. Renowned for his mastery of the traditional blues idiom,in recent years he's introduced elements of jazz, gospel, Tex-Mex,Cuban and other world music into his recordings. In 2010 he wasinducted into the Blues Foundation's Blues Hall Of Fame.  Inaddition, Charlie, who is one of the most beloved blues musiciansin the world, has been nominated for six Grammy Awards and has won24 Blues Music Awards.

BILLY BOY ARNOLD, a contemporary of JamesCotton and Junior Wells, started with Ellis McDaniels (later to beknown as Bo Diddley) in Chicago in 1955, where they created the "BoDiddley" sound at Chess Records.  Billy Boy learned harp atthe feet of the legendary John Lee "Sonny Boy" Williamson whenBilly was just 12 years old.  Billy went on to record singlesfor VeeJay like "Wish You Would", "Ain't Got You" and "You Got MeWrong."  In the mid-60's young British groups The Yardbirdsand The Animals discovered Billy Boy's 45s and had hits with theirown cover versions. In the early 90's Arnold firmly reestablishedhimself as one of the foremost practitioners of classic Chicagoblues with a pair of critically acclaimed releases on Alligator.His most recent CD, Billy Boy Arnold Sings Bill Broonzy, has beenreceiving extensive airplay.

MARK HUMMEL, has been touring nationally since1984 and has most recently written a memoir, "Big Road Blues: 12Bars on I-80," put out by Mountain Top Publishing. Mark started hisband The Blues Survivors in 1977 with Mississippi Johnny Waters andhas since toured/recorded with Lowell Fulson, Eddie Taylor, CharlesBrown, Brownie McGhee, Jimmy Rogers and many other blueslegends.  In 1991 Mark started the Blues Harmonica Blowoutswhich have grown to be a much heralded blues event on the nationalscene. These multi harp packages have included John Mayall, HueyLewis, Snooky Pryor, James Cotton, Kim Wilson, Rod Piazza, CareyBell, Lazy Lester plus almost every other player of note on theblues harp. Mark has been nominated four times for the bestharmonica player Blues Music Award. Hummel's eighteenth and mostrecent CD is entitled Retroactive.

JAMES HARMAN, was born and raised in Anniston,Alabama, where he quickly picked up on the black blues and soulmusic being played on juke boxes and the radio in the DeepSouth.  In his teens, he started playing juke joints and danceclubs throughout the South and recorded a number of 45s.  In1968 Harman moved to Southern California, where he became friendswith Canned Heat, The Blasters, and led bands with top-notch talentsuch as Hollywood Fats and Kid Ramos.  He's released numerousalbums over the years, picking up 10 W.C.Handy/BMA nominationsalong the way.  He has been inducted into the Alabama MusicHall of Fame and is the harmonica player of choice on recordingsand live performances by ZZ Top, appearing with them on both DavidLetterman and Jools Holland's TV shows.

SUGAR RAY NORCIA, started the popular EastCoast blues band The Bluetones 30 years ago with guitarist RonnieEarl. They backed Big Walter Horton, Big Joe Turner, Jimmy Rogers,Otis Rush, JB Hutto and countless others in the early '80s all overthe Northeast.  In 1991 Norcia hooked up with the legendaryRoomful of Blues band and toured the world with the 11 piece band,appearing on their Grammy-nominated release Turn It On, Turn ItUp.  Norcia also recorded the Grammy nominated releaseSuperharps during his Roomful tenure with harmonica heavyweightsCharlie Musselwhite, James Cotton and Billy Branch.  In 2001,he reunited the Bluetones with guitarist Kid Bangham and laterMonster Mike Welsh. The latest Sugar Ray and the Bluetones album,Evening, received four BMA nominations in 2012 including "Album ofthe Year" and "Traditional Blues Album" of the year.