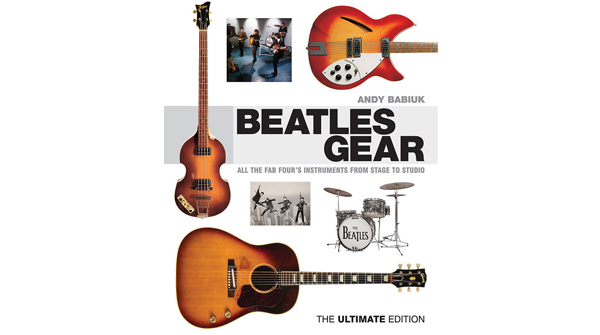 (PRESS RELEASE): With "Beatles Gear:  The Ultimate Edition - All The Fab Four's Instruments From Stage to Studio" author Andy Babiuk has written one of the most influential Beatles books yet.  Babiuk was not only given exclusive access to band members and their most inner circles, but was also granted access to the Beatles musical equipment (as he was for his research for his book, Rolling Stones Gear, 2014).  As a result, Babiuk discovered and writes about some of the most intricate details about the Beatles' lives, their history, music, and tools of the trade. The book will be released Dec. 1, 2015.

"This is why the book is so comprehensive," says Babiuk. "In the years since I wrote the original Beatles Gear (2001), I kept discovering more stories, more secrets, and photos that have never been published before."

The 500-plus page "Beatles Gear: The Ultimate Edition" includes many previously unseen photographs, a cache of rare memorabilia, and a unique collection of specially photographed authentic Beatles instruments.  Shown in luscious quality throughout the book are 43 of the group's original instruments, many still owned by ex-members of The Beatles or their heirs, from George's psychedelic Strat to John's "Bed In" Gibson, and Ringo's roof top Ludwig kit to Paul's Hofner violin bass.

"Beatles Gear: The Ultimate Edition" also played a key role in the recently auctioned John Lennon Gibson guitar, and that part alone in the book reads like a detective story. Babiuk predicted that this guitar would be sold for the highest price an instrument ever achieved, and was recently proved to be correct. The guitar was sold at Julien's Auctions for $2.41 million.

"I got to play the guitar - it was bone-chilling," Babiuk says."It's just a really cool historical find. Kind of a crazy story."

Exactly this kind of "crazy story" make "Beatles Gear: The Ultimate Edition" an absolute must-have for all Beatles fans.