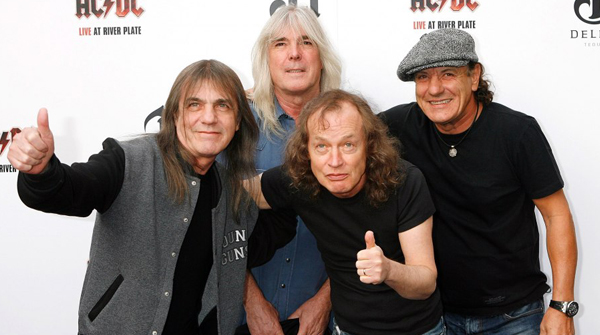 AC/DC will release "Rock Or Bust", their first album in six years, on December 2nd.

The newly announced record will be the first from the legendary hard rock act not to feature founder Malcolm Young on rhythm duties.

"Rock Or Bust" will feature 11 new tracks with one in particular, entitled "Play Ball", set to be previewed via US network Turner Sports as part of its MLB post season campaign which begins on Sept 27th.

Back in July, frontman Brian Johnson spoke of Malcolm's departure with Classic Rock:

"We miss Malcolm, obviously He's a fighter. He's in [the] hospital, but he's a fighter. We've got our fingers crossed that he'll get strong again.... Stevie, Malcolm's nephew, was magnificent, but when you're recording with this thing hanging over you and your work mate isn't well, it's difficult. But I'm sure he was rooting for us."

The album was recorded at Vancouver's Warehouse Studio with Brendan O'Brien and Mike Fraser who both worked on 2008's "Black Ice".  Malcolm and Angus' nephew, Stevie, played rhythm on the new album and will feature as part of the band's world tour in support of the record in 2015.