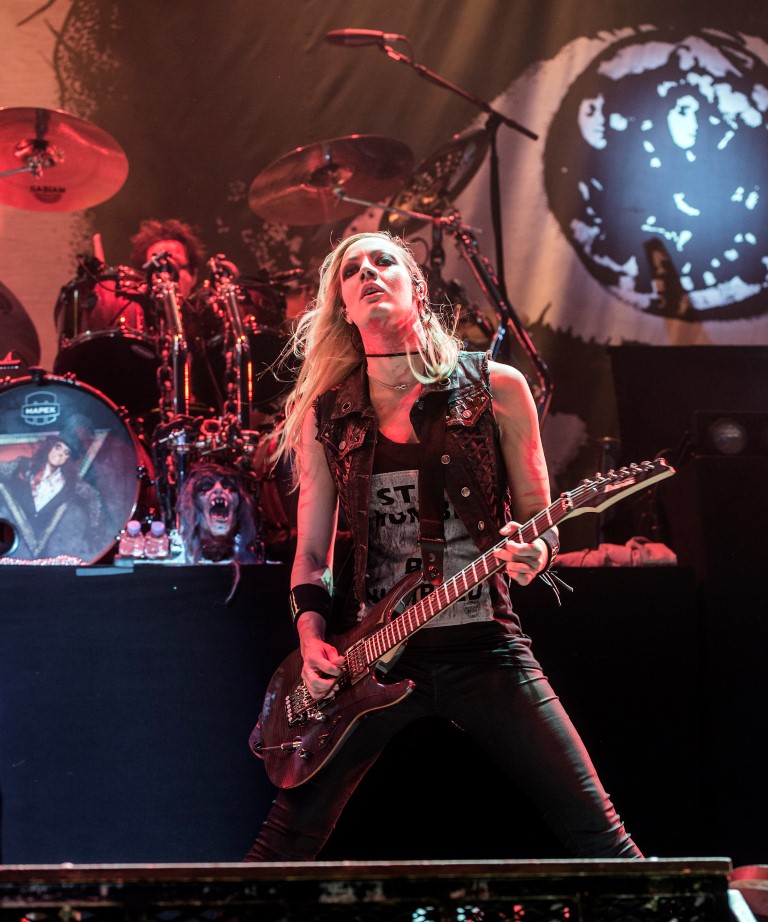 Nita Strauss is fast becoming one of the most renowned hired-gun guitarists in the Rock and Metal world.

Nita Strauss is fast becoming one of the most renowned hired-gun guitarists in the Rock and Metal world. Having been on the road for 15 years, she's played with numerous Metal acts including: As Blood Runs Black, The Iron Maidens and Femme Fatale but her solid live Metal soloing isn't the only style she's been recruited for. Nita was hired to play for Jermaine Jackson from Jackson 5 back in 2010, which required her to exhibit super-sharp funk guitar skills, too. Nita is now touring the world with Alice Cooper as a member of the band, playing sold out shows to huge crowds of fans on a nightly basis. When Nita isn't on the road she's either practising or working towards her debut solo record. Having worked with so many musicians in various styles she feels inspired to write something of her own now, she says.

When I heard Nita was going to be visiting us at Guitar Interactive, I wanted to find out what it takes to be a professional touring musician of her calibre and how one builds such a prolific career in this day and age. Nita also has a strong, positive message for aspiring young female guitarists, so read on!

Nita started playing music at a young age, however it was only when she had seem the famous guitar duel from the movie Crossroads' with Steve Vai that she began to develop a passion for virtuoso hard Rock guitar playing.Â  She mentioned that many people assume her musical heroes growing up would have been predominantly female bands like Vixen and Heart, however it was bedroom-wall posters of guitar heroes like Jason Becker and Paul Gilbert which inspired her on her journey.Â  Little did she know as a young teen that she would one day flawlessly perform Jason Becker's song Perpetual Burn' to the master himself in his own home!

When Nita began playing guitar, she, like many others, was driven to teach herself. Without regular lessons, she relied heavily on REH video tapes that were the backbone for many guitarists starting out in the '90s.Â  One thing I could tell from the moment Nita walked into the room was how driven and open minded she is about guitar. I instantly sensed that this had to be one of the crucial traits of a successful touring musician.

One thing that strikes me about Nita's level of professionalism is that she understands the importance of an additional skill-set on top of technique alone. Nita is a proficient technical guitarist, but she isn't only a shredder. She feels that some of the most important skills needed to play with any touring band are the ability to record and play live to only a click, and to be a solid performer at every show without fail. The latter comes from knowing your parts so intimately that you can play even simple stuff to a very high standard. Versatility is a huge asset as well. Nita can go from Rock, Funk to all out Metal at the flick of a switch. This didn't happen by accident because as her career progressed, Nita took lessons from various guitarists to really get to grips with the nuances of the various styles she aspired to play live. It's this willingness to continually learn and build on your skill set that can get you repeatedly re-hired. Versatility is certainly a key trait to all successful musicians carving a career for themselves.

Another key skill Nita feels is important is ignoring your ego, and accepting critique from musical directors in the work place. Often a musical director or artist may want you to do something you're not used to, maybe play a part differently, or use a new tone. Guitarists as a breed can be quite personal about what we do with our instrument, but when it's show time you need to be able to take direction in a positive way.Â  Following the 15 years of her life spent touring, Nita now has these skills on lock, however she is also very humble and nothing excites her more than expanding her knowledge of the instrument she loves, and progressing her musicianship.

In order to get to where she is today, Nita has become a hired-gun guitarist for multiple bands. Aside from performance, stage presence and the key skills we've already touched on, perhaps the most important feature that we can all relate to is determination. Our careers as guitarists flourish when we continue to move forward without looking back. It takes a lot of will power to keep going, especially in the ever evolving state of music as a business, so it's really inspiring to see Nita creating her own career from the ground up.Â  Unfortunately however, the music industry has a tradition of objectifying women in music, and Rock music in particular has historically had an ugly issue with sexism.

However I feel this is gradually subsiding with the advent of more determined and talented female musicians who are changing the climate and inspiring the next generation of musicians of both sexes.Â  Nita mentioned to me that some guys actually come to shows purely because they expect her to fail. She rises above it, changing their minds by doing what she does best: playing to a super-high standard and melting faces.

In fact Nita has a strong message for young aspiring female guitarists. She feels it's her duty to dissuade young girls who aspire to be Kardashians' and to instead inspire them to be a lot more: to be passionate, dedicated guitarists with a desire carve their unique musical journey, rather than to use guitar as a tool alluding to looks or fame. Nita stated she doesn't care much for the top 10 female guitarists' lists she's periodically included in by various publications, often without her knowing. She gave the impression that she feels that, if anything, such lists' have occasionally led to her misrepresentation, since the ratings she receives from publishers doesn't necessarily reflect her opinions of self, or her real aims and attributes.Â  But there's a much brighter side to all of this. Nita mentioned being approached by parents of young girls at shows, thanking her for inspiring their daughters to play guitar, and introducing them to what has traditionally been a male-dominated instrument. Nita is certainly a headstrong and focussed artist, and her passion for music is clearly inspiring a whole new generation of guitarists

I really enjoyed talking and jamming with Nita Strauss. It was an enlightening, inspiring and humbling experience to be able to chat to a professional musician of her calibre about some of the deeper aspects of the music industry and what it takes to be a professional guitarist. If Nita has achieved this much in just 15 years, I can only imagine some of the awesome places her and her guitar are going to go in the future. 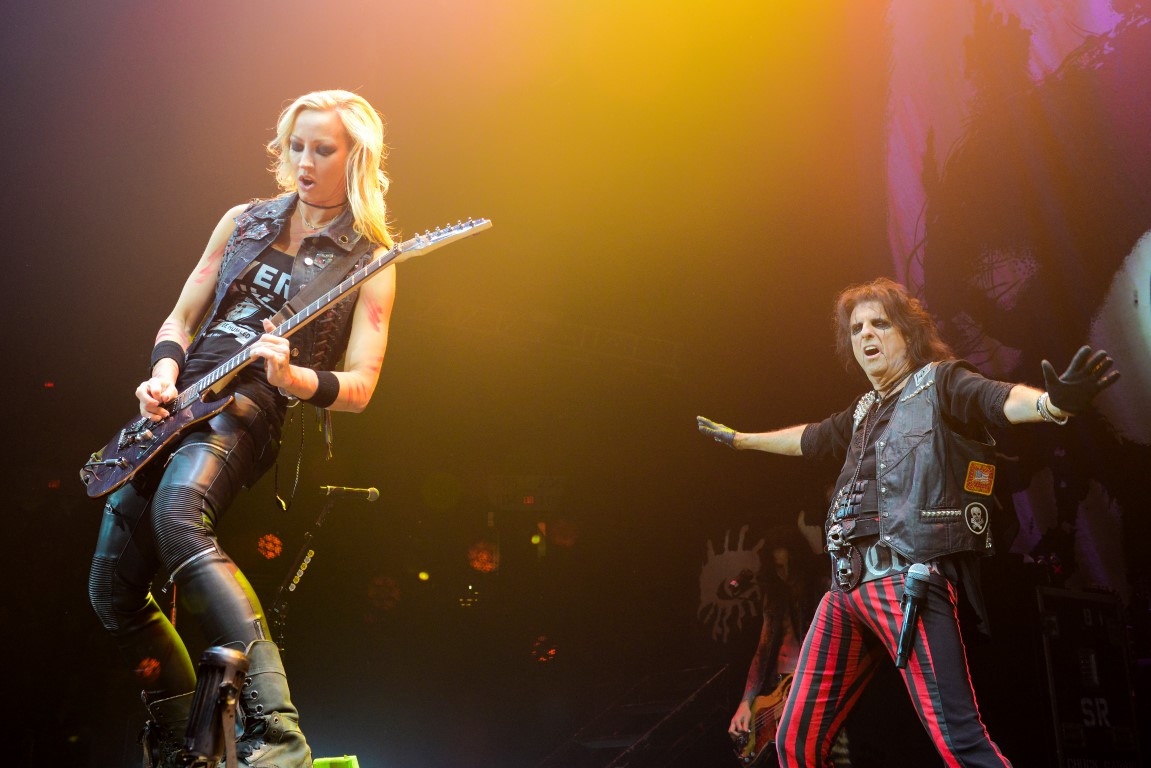 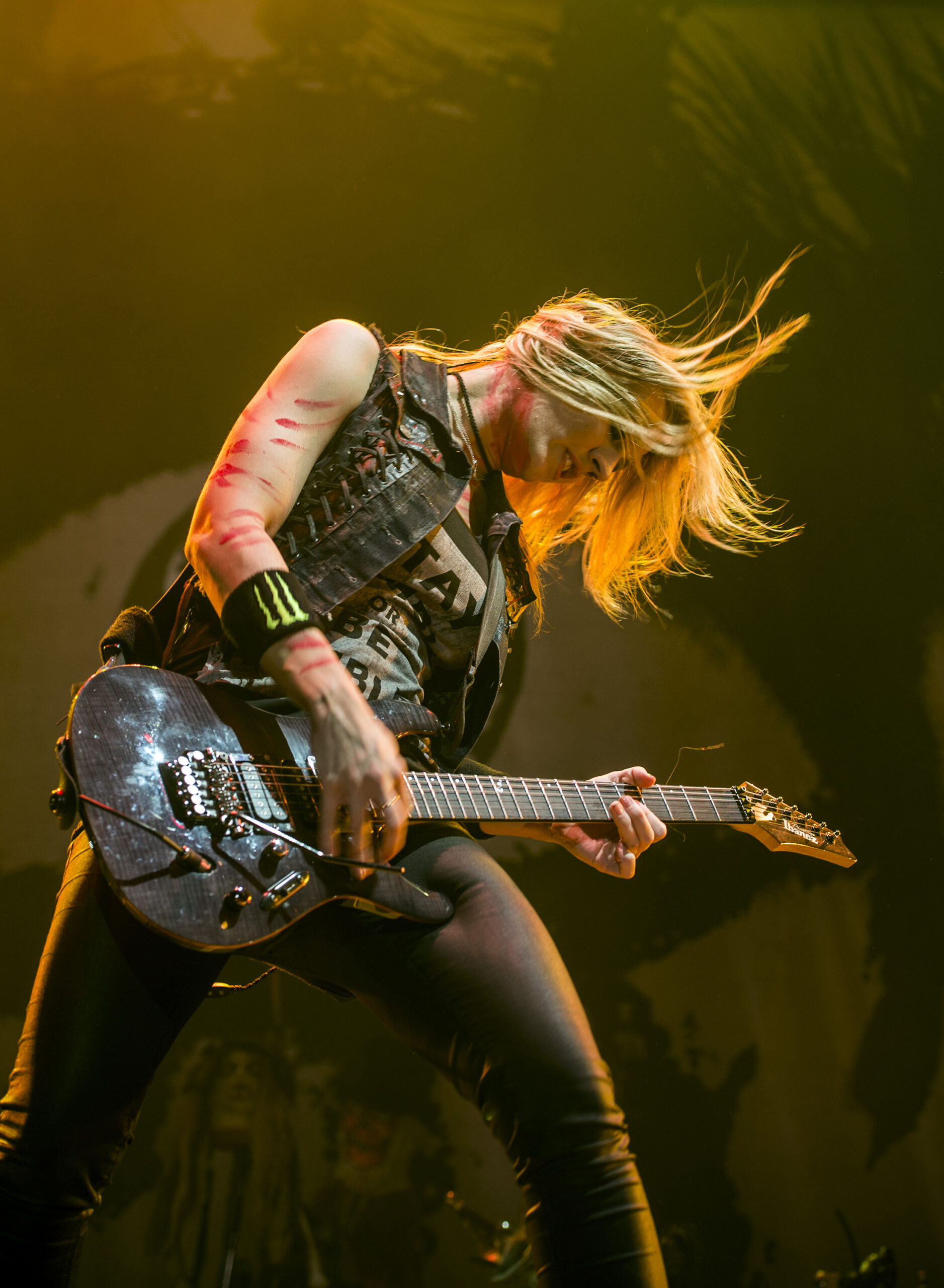