Michael Schenker - A Man and his Flying Vs! 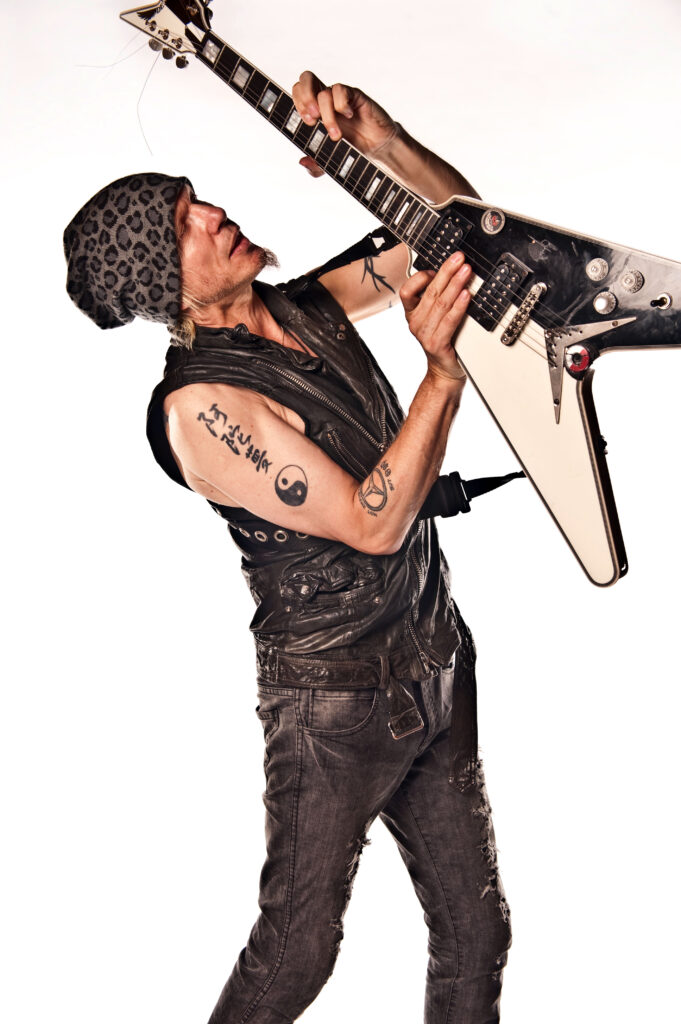 Schenker's relationship with Vs began when he ran into problems with his own guitar and needed to borrow a replacement in a hurry.

Gary Cooper plots a course through the myriad Flying Vs owned and endorsed by Michael Schenker.

It was 1958 - the year Elvis received his draft notice, Nikita Khrushchev became President of the USSR, NASA was created, Boeing's 707 made its first commercial flight from New York to Paris, and the US Airforce lost a hydrogen bomb somewhere off the coast of Savannah Georgia, never to be found again. But far more importantly for our purposes, it was the year Gibson launched the Flying V guitar - the first of the company's 'Modernistic' series, designed to combat the growing challenge from California's upstart Fender brand.

Like the other two Gibson proto-pointy guitars, the Firebird and the Explorer, the Flying V got off to a shaky start - in fact it didn't really achieve major stardom until the 1970s, though Lonnie Mack and Albert King both made the V their trademark guitars pretty early on, and the Kinks' Dave Davis had a gorgeous korina bodied V in the mid-1960s. In '67 Jimi Hendrix acquired one, too. He may be forever associated with a Strat, but much of Hendrix's Bluesier playing was undertaken onÂ  a V. Keith Richards briefly toted one at the legendary Stones In The Park gig in London, 1969 and in that same year Wishbone Ash formed, giving the guitar its longest serving ambassador - Andy Powell, featured in our previous issue ( http://www.iguitarmag.com/issue7 ).

Since then, while never coming within a country mile of the success of the Les Paul, Gibson's Flying V has become a staple of Rock guitar. ZZ Top's Billy Gibbons played one on Fandango and

Schenker's relationship with Vs began when he ran into problems with his own guitar and needed to borrow a replacement in a hurry. Enter big brother, Rudolph, who loaned him a '71 Medallion V.Â  It was love at first bite, as Michael plugged it into his Marshall stacks.

If you want the full story of the Gibson Flying V and some of the wild-side guitarists who have made it their own, you won't do better than consulting Tony Bacon's superb "Flying V, Explorer, Firebird" - the definitive book on the "Modernistic" Gibsons, which we reviewed recently and which is available via Hal Leonard just about everywhere. In Bacon's book, Michael; Schenker explains how the trademark black and white Vs that have become his signature came about:

"The V I got from Rudolf was I think a sort of cherry colour. But I saw somebody playing a V with a natural wood look, and I liked it, so I took the colour off mine. I took a hammer and chisel to it -- and then I had a guitar with lots of grooves in it where I'd damaged it. Some guitar tech filled all the holes with white stuff and then painted it over so you couldn't see the damage any more. I didn't know if I should play a black V or a white V, so I asked him to spray the guitar black and white, and that was it."

The hallmark colour scheme stuck and later, when Schenker went to that Saville Row of Heavy Metal guitar making, Dean, he stuck to his monochrome theme.

One of the curious things about the V is that a lot of the most famous ones have never been anywhere near Gibson. Andy Powell uses a V made by Kevin Chilcott, K.K. Downing went to Hamer and ESP for some of his and Michael Schenker is famous not just for having his characteristic V made by Florida's Dean Guitars, but for having spawned a series of them - no less than nine variations currently being listed on Dean's website.

Matt Speed, who looks after Dean Guitars in the UK Â says: "Michael was already familiar with the guitars and their quality when he came to Dean in the early 2000s and the first one the company released was the Michael Schenker Standard USA - which is a half black, half white one with block inlays.

"The thing you need to know about Dean Guitars is that it has never had a mass production facility in the USA, so every USA guitar that is made is handmade, from start to finish. Those guitars were produced in very limited numbers and it wasn't a situation where you had an area in the Dean facility where production Michael Schenker guitars were built and then you had just one guy building guitars for the artists - they were all built by the same people.

"At the time, Michael was using DiMarzio Signature Series pickups and they were part of a guitar that had a mahogany body, ebony fingerboard, half black, half white finish - white binding on the black side and black binding on the white side, Grover tuners and a different way of positioning the controls, with the volume controls set up away from the playing position, with the switch out of reach too, so that you don't knock them by accident. It's the only guitar in the Dean range that is configured that way."

About three years ago, Dean decided it wanted its own pickups, so designer Pat Baker was drafted in, who set to work with the extensive Dean artist roster to produce a range of 'DMT' pickups that was to be completely artist designed. This gave rise to the Michael Schenker 'Lights Out' model (named after the legendary UFO song of the same name) which is now available not just fitted to a Dean guitar but also as separate replacement pickups.

"There have been various Schenker models since then," Speed says. "The model designed with his brother, Rudolph, called The Schenker Brothers was particularly impressive - a flame-topped guitar with the Schenker name inlaid in pearl into the ebony fingerboard with a laser used to etch a printed design embossed into the image. It's a really beautiful guitar. They weren't cheap, but you have to remember that these are handmade guitars of the really highest quality.

"The Michael Schenker Flames came next and I remember seeing a picture of the first one and sending it to my boss with just the one word "Want!". Michael was using that almost exclusively for a while and he still does use it a lot.

"After that - and here's one if you like your tonewoods - they took a big chunk of maple, a big chunk of mahogany and joined them together to create what they called the checkmate - it even had a half-maple, half-ebony top and they repeated that on the neck - even the fingerboard is half and half but with the inlays made of the same woods but the other way around. Only 50 were made."

If your finances don't run to the handmade USA Dean Schenkers, all is not lost. The Flame is on offer in a Korean-made version, which comes with US-made DMT Lights Out pickups.

As you would expect, there are now Dean Schenkers built in China too now - not least the Retro, which mirrors the Gibson-era Schenker. Finally, there's the astonishing graphic design - Strangers In The Night model - which pretty much defies description!

Confused? Fortunately, Dean has made a lot of Schenker and V video available! 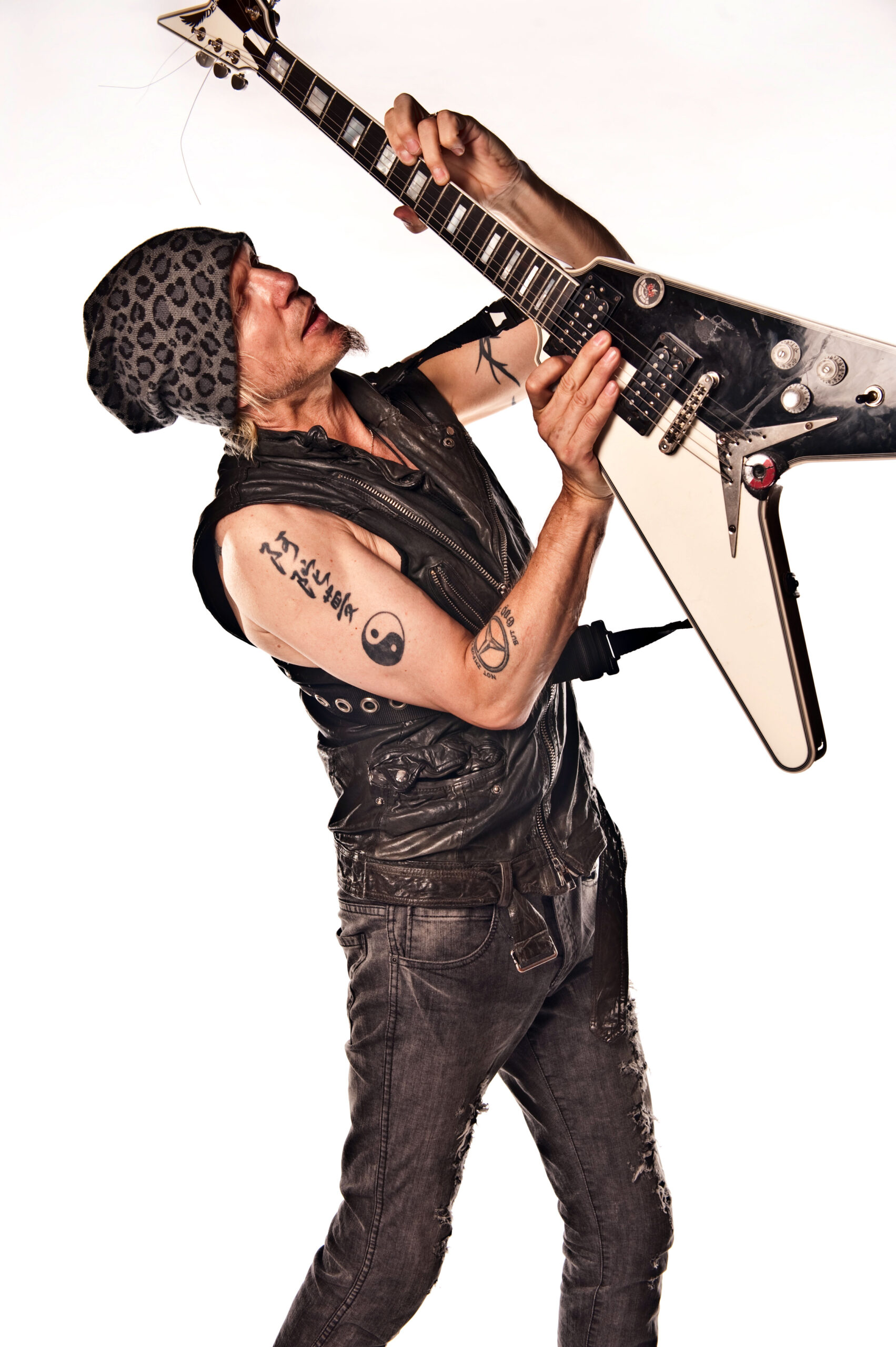 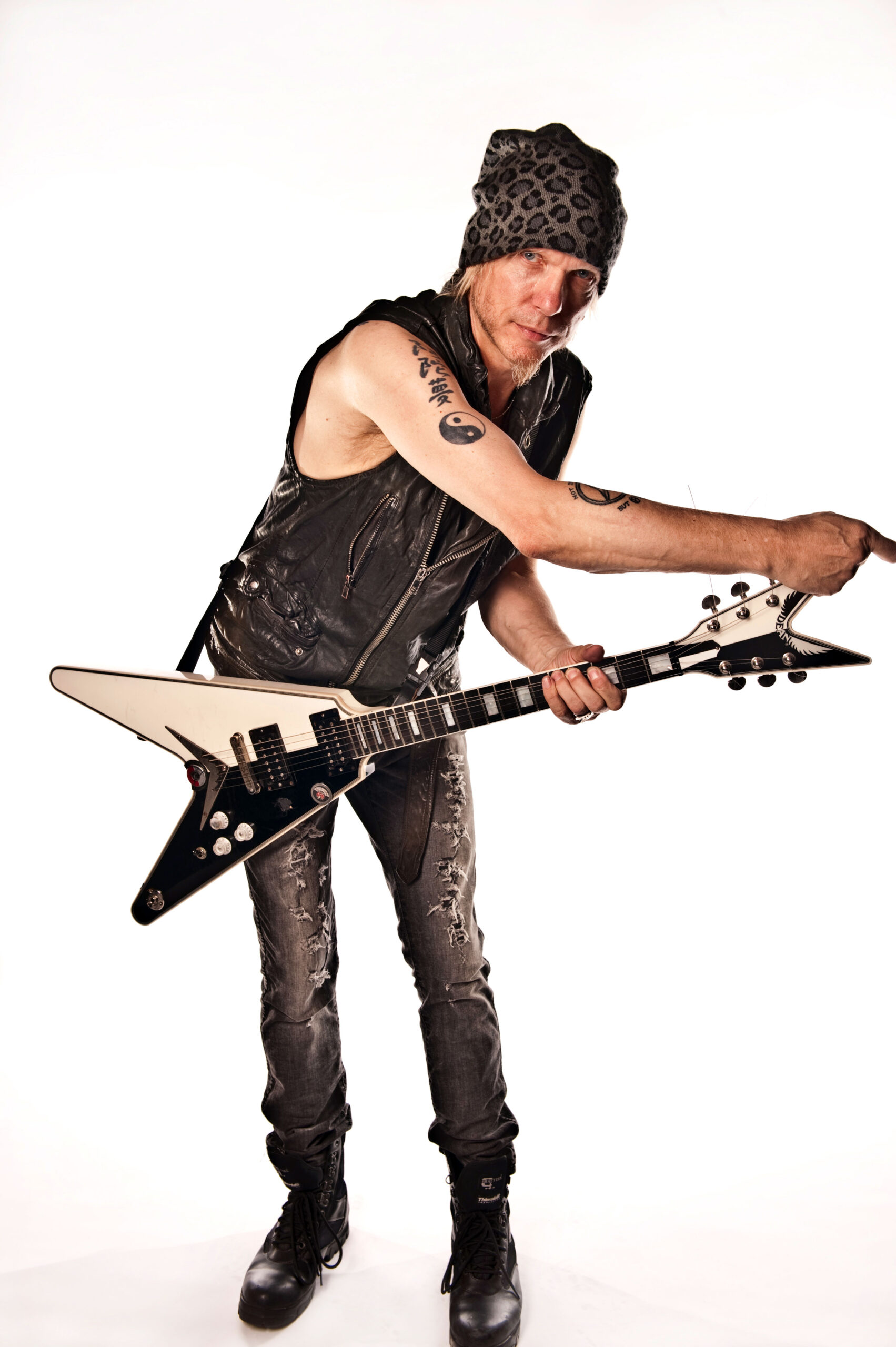