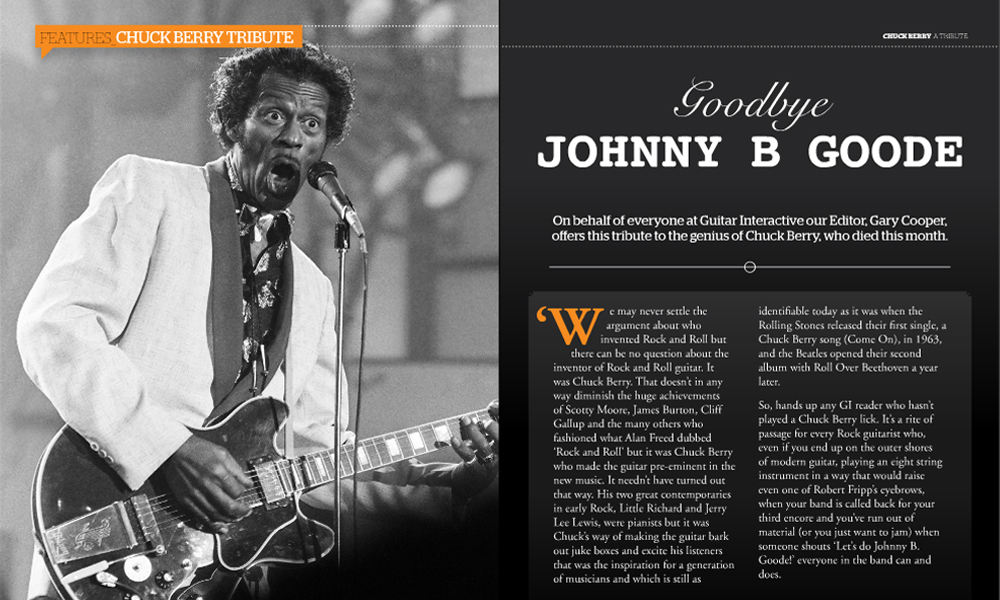 On behalf of everyone at Guitar Interactive our Editor, Gary Cooper, offers this tribute to the genius of Chuck Berry, who died this month.

We may never settle the argument about who invented Rock and Roll but there can be no question about the inventor of Rock and Roll guitar. It was Chuck Berry. That doesn't in any way diminish the huge achievements of Scotty Moore, James Burton, Cliff Gallup and the many others who fashioned what Alan Freed dubbed  'Rock and Roll' but it was Chuck Berry who made the guitar pre-eminent in the new music. It needn't have turned out that way. His two great contemporaries in early Rock, Little Richard and Jerry Lee Lewis, were pianists but it was Chuck's way of making the guitar bark out juke boxes and excite his listeners that was the inspiration for a generation of musicians and which is still as identifiable today as it was when the Rolling Stones released their first single, a Chuck Berry song (Come On), in 1963, and the Beatles opened their second album with Roll Over Beethoven a year later.

So, hands up any GI reader who hasn't played a Chuck Berry lick. It's a rite of passage for every Rock guitarist who, even if you end up on the outer shores of modern guitar, playing an eight string instrument in a way that would raise even one of Robert Fripp's eyebrows, when your band is called back for your third encore and you've run out of material (or you just want to jam) when someone shouts 'Let's do Johnny B. Goode!' everyone in the band can and does.

What went into Berry's style was a mix of the influences that flowed into Rock and Roll generally - a bit of Country, a bit of Jazz, a bit of Blues and a fair bit more big band Swing than many realise. But what made him different was that Chuck put the guitar up front and in a way that was unique to him, opening his songs with licks, developing phrasing and a style that, while it wasn't difficult to approach fairly closely, wasn't as straightforward as it looked (as Keith Richards famously found out when Berry decided to take him to task over the correct way to play Carol in the tribute movie Hail Hail Rock 'N Roll). But exact accuracy aside, most of us can manage 'a Chuck Berry' and so it became, a bit like medieval Latin to scholars, a lingua franca that most guitarists can use so that they can play with other musicians even when they don't share a single word in a common spoken language.

And, of course, let's not forget those prolific songwriting skills. Chuck sang about things that young men wanted to hear about (mostly girls and cars) in a way that made his sly storytelling compelling.

If getting the licks right can be tricky, getting the sound can be hard, too. In his immediate tribute to Berry, published on the night the sad news broke, Brian May commented on how hard Berry hit the top strings and how that sound was the 'bell' that Johnny B. Goode was ringing in the song. As usual, Dr May is right. He is also right when he goes on to explain just how much impact Chuck Berry's music had when it first appeared, in the mid-1950s. Unless you were there at the time, it is simply impossible to convey the way Berry's playing leaped out of a radio speaker that had previously never had to strain to reproduce anything more dynamic than Perry Como or Johnny Ray. Hearing Chuck was a revolutionary experience, not really equalled until Jimi Hendrix came along in the 1960s. It was even more so in Britain, which had its airwaves very tightly controlled by the BBC. You hardly ever heard Chuck Berry on the radio - but when you did, you knew the world was about to change. It may have been this suppression that made Berry an even greater influence on British bands of the early 1960s than on their American counterparts. In the UK he was underground. In the States he was on the Johnny Carson show.

His influence on playing might have been profound but on guitars and amps, it was less so. When he started out he was often seen playing a Gretsch - a 6120 or a White Falcon, but he went on to become most closely associated with Gibson, the ES-335 and 355s being his main weapons. He played others too: an ES-350T, a BB King 'Lucille', a Les Paul, a Flying V and (which may come a surprise) even a Stratocaster on rare occasions. His amplifiers though were always the same: unadorned Fender Dual Showmans and if he couldn't get a Dual Showman, then it would be another all tube Fender.

Not everyone will agree with me on this but I have never been 100 per cent convinced by the sound you get playing Chuck Berry's music on a solid bodied guitar, I think he chose semi-solids for a reason. So stick to, at least, an Epiphone clone and a clean/warm amp. No effects pedals required!

And if you really want to ring that bell, here is a free lesson and backing track from Licklibrary's Learn To Play Chuck Berry DVD from sometime GI columnist, Steve Trovato, with our compliments!

And finally, thank you, Chuck. You gave the world a priceless gift.