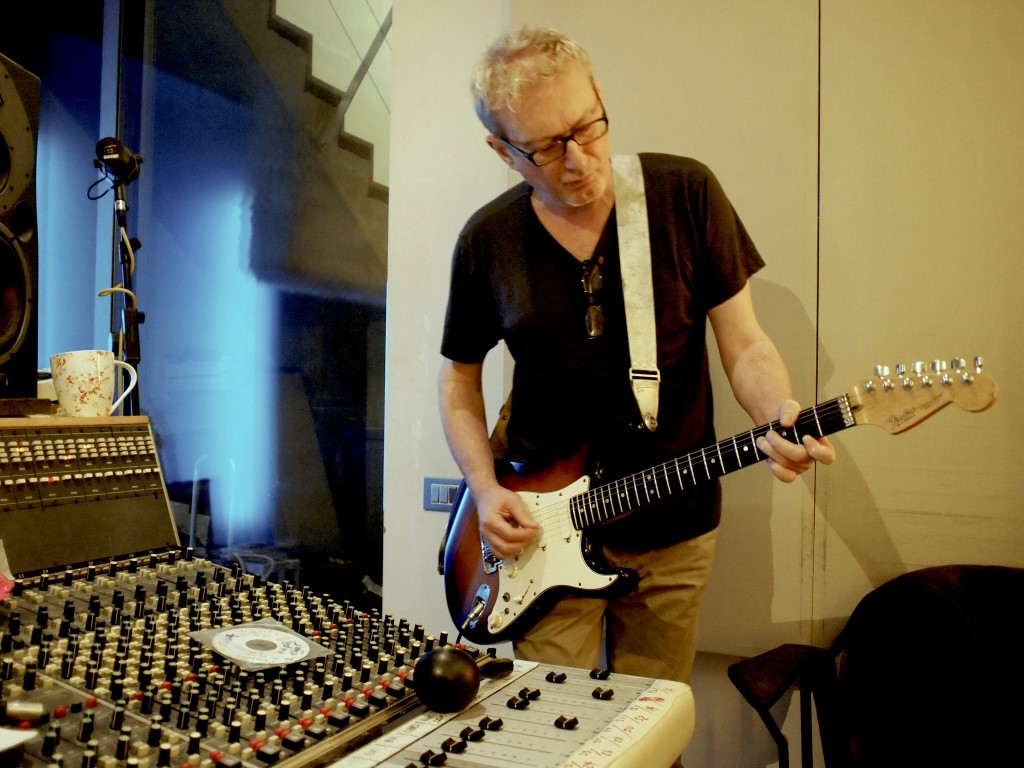 The Gang Of Four influenced an entire generation of musicians, including Kurt Cobain, Flea and REM's Michael Stipe. Always present in the band's music is the unique guitar style of Andy Gill.

The Gang Of Four influenced an entire generation of musicians, including Kurt Cobain, Flea and REM's Michael Stipe. Always present in the band's music is the unique guitar style of Andy Gill. With a new album (What Happens Next?) just released, Andy Gill speaks to GI's Levi Clay. Richard Morgan fills in the background.

What's the unseen common denominator between Nirvana's Kurt Cobain, Flea of the Red Hot Chili Peppers and R.E.M. frontman Michael Stipe? Answer: in their early days as musicians, they were all majorly influenced by Gang of Four, the Leeds, UK-based post-punk pioneers.

Not that you'd think it, maybe, from listening to the multi-million selling records these three musical behemoths have pumped out during the last three decades. But dig a little deeper - under the sing-along choruses and the packed-out stadiums - and it's in there, that heady but intelligent mishmash of Punk-rock, Funk and Dub broken up by abrasive, politically-aware vocals and cutting, stop-start riffs.

Said head-turning guitar work came - and continues to come - courtesy of Andy Gill, who, as of 2015, is the only original member left in the Gang. Gill originally formed the group with close friend and fellow art student Jon King in 1977; Gill wrote the music and King the lyrics, and they quickly became a tight unit, the band fleshed out by bassist Dave Allen and drummer Hugo Burnham.

Gang of Four released four albums before splitting in 1983, although various subsequent reformations have taken place since with and without the full count of the original members. Now, spring 2015 sees the release of the band's ninth full-length, What Happens Next, and this time Gill is in the hotseat alone, taking full charge of writing, arranging and producing.

This comprehensive multitasking is all part of a dual career that Gill began with the band's first album, Entertainment!, on which he and King shared production duties with Rob Warr. Released in September of 1979, the album helped change the way the UK thought about punk: the lyrics were astute, rather than plain angry at the whole world all the time, and the instrumentation included informed nods to Funk, Reggae and Dub. Plus, Gill would regularly do something many guitarists of the time (and since!) have found impossible: he would stop playing for whole passages and let the bass and drums carry the songs.

Many of these musical innovations came directly from Gill, whose guitar influences extend far beyond the standard for a Punk' player. Growing up, he was a Beatles and Stones fan, humming the riff to Satisfaction on the way to school and back. After a cousin showed him how to play the riff on guitar, he was off.

Gill also loved Hendrix's approach to the instrument, and digested the influx of American bands whose success transcended the Atlantic: The Velvet Underground, The Band, James Brown, Funkadelic, and others. The Reggae and Dub influences helped inform Gill's love of rhythmic shifts, which are consistently evident in Gang of Four's grooves - often, the guitar will drop out completely and the rhythm section will build the song's musical tension before Gill returns to the action with aplomb.

It's an effect plenty of Rock bands have used since, from the aforementioned Chili Peppers to Indie superstars Bloc Party (although Kele Okereke and Co. have always played down Gang of Four's influence). And yet, despite this influence among musicians - and the fact that they've sold hundreds of thousands of records - Gill and Gang of Four remain something of a cult band, an act revered by the music world and musicians, but feared by the general establishment and under the radar of many casual music fans.

Which is possibly exactly what they set out to be. In their original guise, Gang of Four were celebrated for their intense live shows, but they also cast dread into the hearts of some sections of society. The BBC's Top Of The Pops programme, for example, once tried to get the band to change an At Home He's A Tourist lyric from rubbers' to rubbish' for fear of the original being too risquÃ©. The band walked off the show, and the song was consequently banned by the BBC. (It would not be the last time the Beeb would take issue with the band's lyrical content: the single I Love A Man In A Uniform was also banned by the broadcaster during the Falklands War in 1982.)

Throughout and alongside his career with Gang of Four, Gill has been in-demand for his producing abilities; perhaps most notably, he was behind the desk for the Red Hot Chili Peppers' self-titled album in 1984. This must have been something of a joy for young bassist Flea, and the story of how the two parties met for the first time, which Gill recounts in our accompanying video interview, has now become the stuff of legend (hint: it involves a nude stage invasion).

Other groups to have taken advantage of Gill's production skills include the likes of Therapy? and Killing Joke, as well as a host of British alternative Rock and Indie bands such as The Young Knives, Hell Is For Heroes and The Futureheads. Many of the albums were laid down - at least in part - at Gill's own studio, The Beauchamp Building. Located in central London, it's been his recording base since the late nineties and, as something of a traditionalist when it comes to recording, Gill runs everything through a classic Neve 72 input console (51 series) with hard disc recording using Logic software.

When it comes to his guitar gear these days, though, he's having to push the boat out a bit. Traditionally, Gill's Gang of Four tones were relatively straightforward, with his basic sound supplemented by subtle amounts of tremolo, chorus, vibrato, distortion, and delay. Usually seen with a Strat strapped to his chest - although he's also used a Gibson 335 on the new Gang of Four record - Gill also favoured transistor amps, rather than tubes, for their thinner sound. Mostly he plumped for Peaveys (4x10 models, to be slightly more precise), with his effects coming courtesy of a Peavey multi-FX unit.

But the new Gang of Four material, Gill says, is a slightly tougher nut to crack, and he's having to resort to planning out a rig controlled by MIDI to handle the ins and outs of his newer tones. There's talk of him using a laptop and plug-ins for future live work, and he's even begun to use DIs when recording his guitar sounds, as opposed to traditional miked-up cab method. It's something so-called guitar purists might turn their noses up at - but we sense Gill isn't the type to lose any sleep over concepts like that.

Because, ultimately, Andy Gill is a survivor, the last enduring original member of a group that's seen plenty of fickle bands and music scenes come and go, and that's come and gone itself - then come back again - quite a few times. The one constant has been Gill's brittle, slicing guitar tones, always identifiable and recognizable, always influencing the chasing pack.

And although Gill may himself not be a household name like the above-mentioned megastars he helped motivate towards the top of the game, if you're a fan of guitars, you've either heard him - or someone else trying to sound like him.

Incidentally, if you're a budding player - or producer - who wants to nail that Gill philosophy, he imparts a particularly wise piece of advice on finding inspiration at the end of our video interview. But we won't spoil it for you here. You'll have to watch it all if you want to join this particular Gang