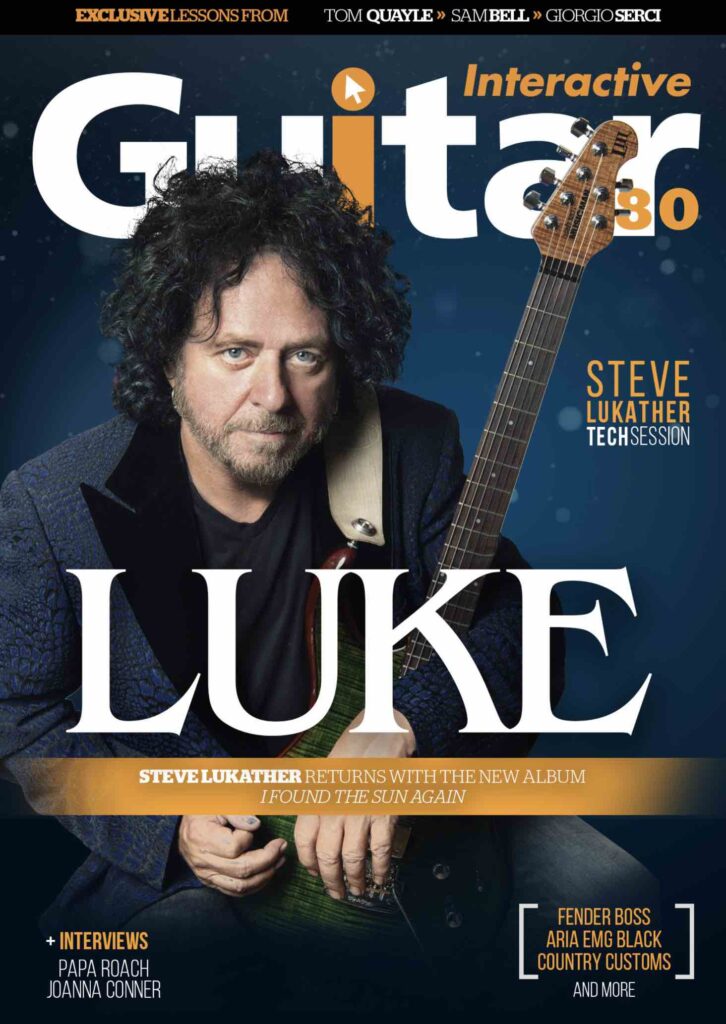 Hello and welcome to issue 80 of Guitar Interactive Magazine!

Over the course of five decades, Steve Lukather has placed an indelible stamp on pop culture. Alongside his tenure as the only member of Toto to never take a hiatus from the band, he has performed on thousands of albums as a session musician. Amongst these musical contributions are some of the most successful, influential and enduring records of all time. Back with a brand new album entitled 'I Found The Sun Again,' Luke chats with Guitar interactive's Jonathan Graham about the new album, noisy neighbours, his relationship with Music Man guitars, the passing of Eddie Van Halen and more.

Continuing our exclusive features on this issue's cover artist Steve Lukather, Sam Bell breaks down the unmistakable phrasing and killer technique of the man himself in this issue's Guitar Interactive Tech session.

If that's not enough, we chat with Jerry Horton of multi-platinum rock giants Papa Roach as the band return with their second greatest hits compilation, 'Greatest Hits Vol.2: The Better Noise Years.' Chicago-based slide guitar virtuoso and singer-songwriter Joanna Connor, best known as one of the reigning Queens of blues-rock guitar, also features in this issue as she returns with her incredible new album '4801 South Indiana Avenue.' Out now on Joe Bonamassa's new independent blues record label KTBA Records.

As usual, with every issue, we have a whole host of the latest and best gear reviews from around the world of guitar, with our team of world-class gear reviewers offering their unique insight, expertise, and personality, which as always, I hope you will enjoy. However, if that's still not enough, don't forget all of our exclusive lessons from Tom Quayle, Sam Bell & Giorgio Serci.

See you next time.