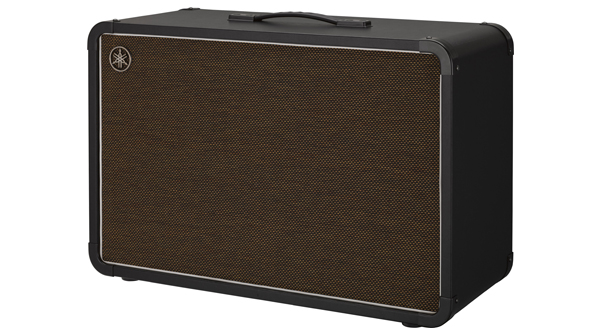 Yamaha released the THR series of ‘mini’ amplifiers a few years back and has enjoyed huge success with the range, designed to be your ‘third’ amplifier for practising and light recording, offering superb tone and dynamic response from a very small package. The series has been so successful thanks to Yamaha finding just the right combination of features in a unique design, boasting multiple amp models, in-built effects, Yamaha’s acclaimed VCM modelling technology, a fully-fledged audio interface and a stereo pair of full range speakers for playing music and backing tracks through. Not only that, but the THR5 and 10 look great too, with a visual aesthetic that looks good in both the studio and living room. The only real downside of the series lies in its low output, leaving many people asking Yamaha for a higher power version that can be used for gigs and louder rehearsal spaces.

In response, Yamaha has produced the THR100HD, a 100 Watt head that attempts to retain the great VCM modelling technology and mindset of the THR series but in a format that is loud enough for live settings. The 100HD is not, however, a straight conversion of the original THR series but with more volume. In producing the new heads, Yamaha has slightly altered its vision for this series by adding some truly unique and useful features whilst removing some of the existing series features at the same time.

The THR100HD is essentially two complete amplifiers in one head-shell, with an identical feature set and control panel consisting of an amp model selector with five models, switchable booster with a level dial, gain, master, three band EQ, presence, reverb and volume controls. The amps can be considered as a standard two channel format, or can be used in a number of innovative ways thanks to individual inputs and outputs for each amp. This is literally two complete amplifiers in one head, offering the possibility to use two guitars and two cabs, one assigned to each amp, or a single guitar with two cabs, or a single guitar with one cab in stereo or mono. Even more impressive is the fact that both amps can be used at the same time in parallel using the I+II mode, for an insane number of possible tonal outcomes, combining two cleans, clean and dirty sounds or two dirty sounds, with individual effects loops (via TRS cables) for each amp providing even more possibilities. Some of the greatest tones ever played on a guitar consist of two amps running in parallel and Yamaha is giving users this possibility at a massively reduced cost and footprint.

The THRC212 closed back cab features a pair of deliberately mismatched Eminence 'The Legend' and 'The Tonker' 12” drivers with selectable mono or stereo operation, allowing each amp to be used with an individual speaker or through both. This allows for even more tonal customisation and stereo operation through a single cab. The cab is very well made and sounds great, making it the ideal combination for the THR100HD.

The back panel provides all of your usual speaker outputs and a switchable output section for lowering the volume to 50W and 25W mode as required. Yamaha has gone a stage further with the VCM modelling on the THR100HD, offering a selection of output tube selections - namely EL84, EL34, 6L6, 6v6 and KT88’s plus switchable Class A and Class AB operation, via the back panel. These selections can be made individually for each amplifier for a truly mind blowing number of tonal and dynamic responses, the only downside being that none of these selections can be stored as a preset - a strange omission given the number of possibilities on offer. One can only assume that this was in order to keep the amp as simple to operate and as affordable as possible, but it will be missed by many.

Yamaha has omitted the audio interface from this head, but it’s a decision that makes sense given the ‘live’ nature of the amp. Instead it has included a pair of speaker emulated Line Outs, one for each amplifier, that have a range of user selectable Impulse Responses for different speaker and mic combinations whilst recording, or for sending to the front of house on a gig. A killer feature is the ability to upload your own Impulse Responses via USB to the unit, allowing access to the ever growing library of fantastic sounding third party IRs on the market.

Yamaha offers a software download that connects the amp to your computer via the USB port, allowing users to select between three different modelled boosters, the white, green and amber referring to MXR Micro amp, Tube Screamer and Fulltone OCD type boost models, respectively. There are also a number of different reverb models to choose from, taken directly from Yamaha’s acclaimed SPX processors. These include a Plate, Hall and Room variants, although you don’t have access to any of the parameters of those reverbs other than the mix. The effects loops can also be changed from series to parallel per amp and Yamaha has included a high quality footswitch for channel selection, channel combining, boost, effects loop operation and reverb on/off selection.

This would all be futile if the THR100HD didn’t sound great, or react like a real tube amp but fear not, as the new heads retain all of the modelling quality offered by the original THR series and don’t exhibit any of the cheapness in feel that can occur when modellers are played at higher volumes. Each of the amp models, Solid, Clean, Crunch, Lead and Modern offer ever increasing amounts of gain and react very convincingly indeed to pick dynamics and volume changes. The solid state power amp is designed to react like a tube power section and does its job very well without feeling stiff and brittle.

The range of tones on offer is staggering and the power tube selections react exactly as you’d expect with a ton of volume if you need it in 100W mode. It’s a shame that you can’t select the different boosts and reverbs from the front panel but Yamaha’s aim was that you would be able to use the amp without ever reading a manual and in this regard they have been successful in the amp's basic functionality.

The THR100HD is a very impressive package, boasting some truly unique features that will appeal to a lot of players. It’s also very light and could be a great option for those sick of carrying around heavy 100W heads. This is definitely a different beast to the original THR series and some may feel that it moves away from what they wanted - just a louder version of the THR10. Some THR fans will be surprised by Yamaha’s design choices for this amp but is certainly very interesting and sounds great with a massive array of tonal options on board and is well worth checking out, especially for those looking for a dual amp set-up.