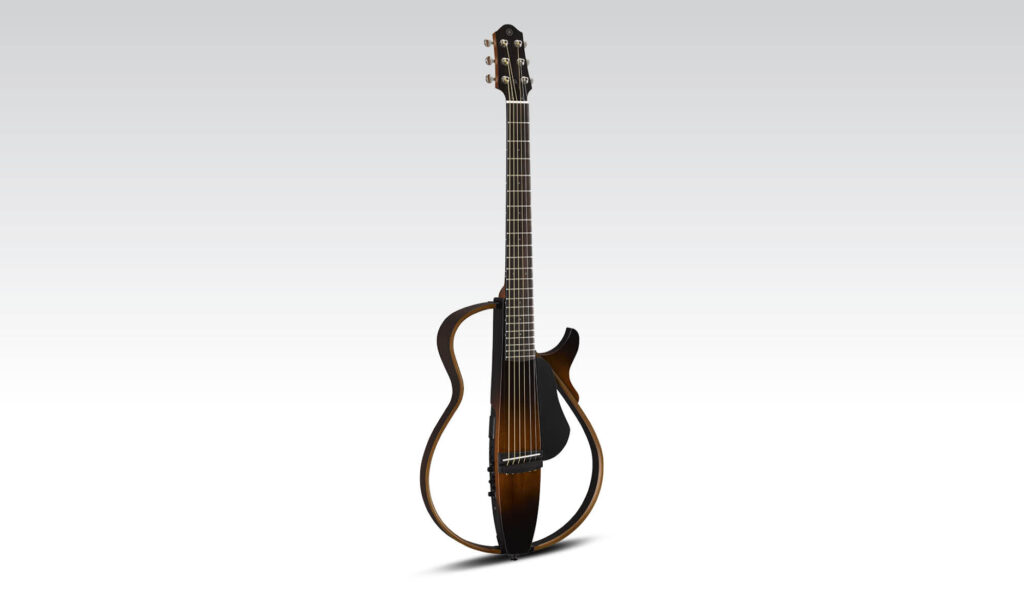 Its collapsible frame reduces the guitar to fit neatly in any train/plane overhead. Once partnered with its teeny gigbag (included) you will indeed find yourself joyfully skipping from train to plane to an automobile.

Ideal for live use

The Yamaha SLG200S Silent Guitar could very well be the perfect instrument for practice, travel or stage use – any time an acoustic guitar just won’t do. Stuart Shields takes a closer look at this unique instrument.

Taking a cue from its close Yamaha family of silent stringed instruments and pianos, Yamaha’s third generation Silent Guitar the SLG200 has more than quirky looks and portability to offer. Stuart Shields investigates why ‘silence is golden’!

The SLG200 certainly commands attention. Its appeal as a travel guitar solution is widely recognised and generally, the first thing players gravitate towards - so let’s acknowledge the obvious stuff and swiftly move on to dig a little deeper. Its collapsible frame reduces the guitar to fit neatly in any train/plane overhead. Once partnered with its teeny gigbag (included) you will indeed find yourself joyfully skipping from train to plane to an automobile. This is an instant bonus to your commute unless you hold enough status to book your guitar its own seat ala BB King. Another unique aspect; as the name suggests the Silent Guitar is … well …erm … silent - giving almost inaudible volume when played acoustically.

So, what possible tone can we expect a guitar with no body? And why in the name of all that’s strummy do I want a silent one? Glad you asked, stick with me because this is where the magic begins. Followers of recent innovations in the Yamaha acoustic world will no doubt be accustomed to this Japanese brand of wizardry. The sorcerer’s wand in the case of SLG200 comes from Yamaha’s SRT (Studio Response Technology) piezo and preamp. The premise is this – we all know that the best acoustic tone is going to come from some well-placed combination of (often expensive) condenser and ribbon mics in a high-level studio environment right? Now imagine having that tone the instant you plug your guitar into any flat response speaker (or headphones for that matter). This, in a nutshell, is what the SRT system does.  Data is taken from an idealised studio recording of a mic’d up full bodied guitar and subsequently modelled. The result is a resonant, depth of tone and response that, does indeed, sound studio quality in a direct contrast to a more pure and raw piezo signal. You can, however, blend the piezo and mic tones with an aptly named ‘Blend’ control on the preamp should you want to adjust things for to cut through the mix a little more for example. Tonally and dynamically things are reassuringly real and the SRT system genuinely impacts playing for a more considered and musical outcome. For the more geeky player, its worth a note that the microphones modelled here are a Neuman U67 (condenser) and a Royer R122 (ribbon).

Given its immediate functionality as a practise instrument, the recently upgraded SLG features a headphone jack and aux connection; allowing you to play along to tracks via your device of choice. You can enjoy this in complete isolation without any impact on anyone within hearing distance. Needless to say this presents some new practise opportunities.

To help you become thoroughly immersed in the playing experience the SLG has built-in reverb and enjoyably spongey chorus. These effects will transfer to the output signal too – not just the headphones!

So here we have an acoustic guitar which can plug directly into a PA or powered speaker and give instant studio-quality acoustic tone with ambient effects. Plus – no body = no feedback! Minimum fuss at sound checks and no upsetting the sound guy! Speaking of direct input -  It’s worth a user note here that when engaging the SRT side of things, the SLG really won’t be friends with a standard acoustic amp (unless on a ‘flat’ setting) as this will colour things quite negatively – a little like plugging an amp modeller into the front of your amp!

The decision to replace the resin construction with a maple frame and mahogany central body is something I really like. A nice cosmetic upgrade but also advertises that the SLG is still an acoustic at heart. Don’t be put off by the unconventional looks either, the shaping if the upper frame supports your arm nicely and you do feel that you’re holding a guitar with a familiar shape and substance – nothing odd or any notable adjustment to your playing needed.

For the nylon player, there are two more SLG200s in the range – a standard 52mm nut classical profile and a more manageable 43mm nut model for those who want the tone but not the traditional string spacing.

All in all, this is another fine example of Yamaha producing an instrument meets the needs of the modern performing and travelling player with a simple look at improving your practise time and minimising technical dramas during live performances. Check one out at your local dealer! 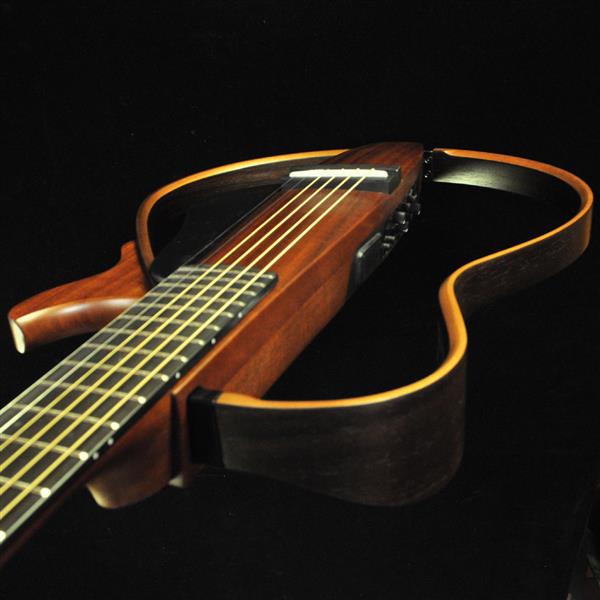 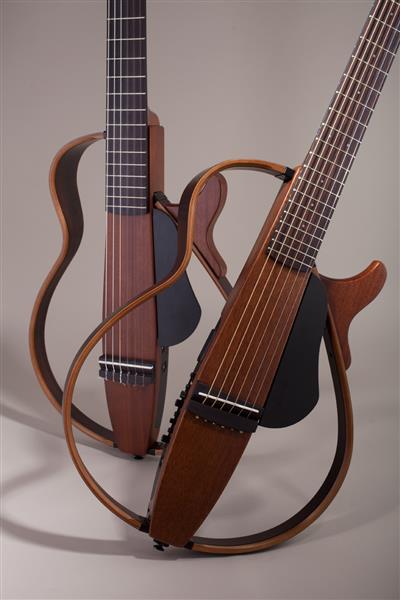 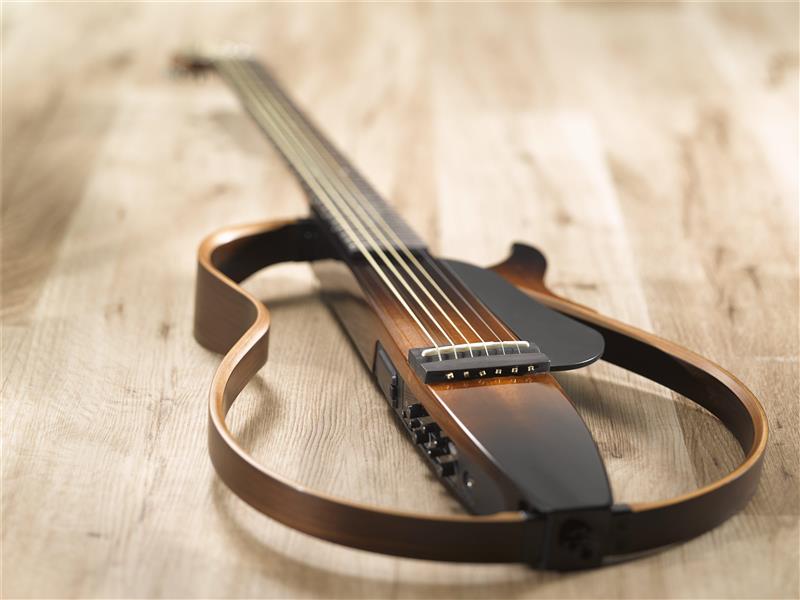 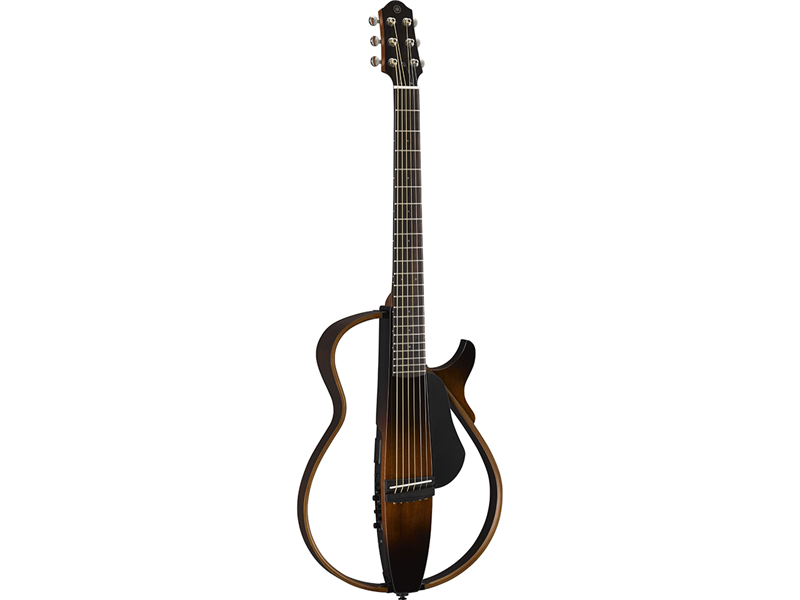 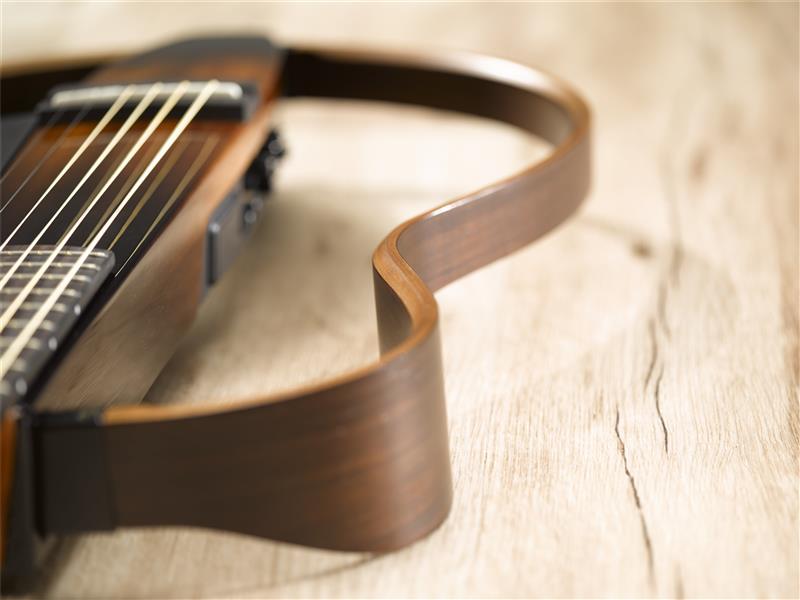