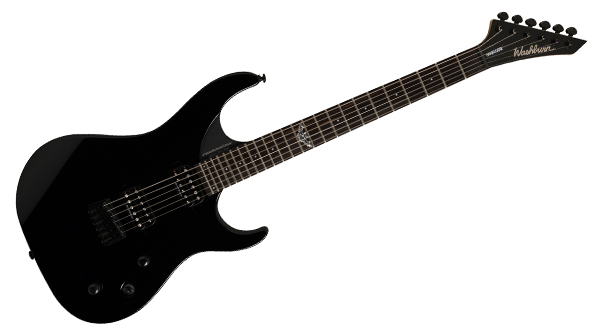 Washburn is perhaps most well known for its shred axes, especially the company's signature guitar work with Nuno Bettencourt from Extreme. The Washburn Parallaxe series is dedicated to making affordable high quality shred guitars with solid build quality and rugged design and there's no mistaking that Washburn has that market in mind with this model - even the box the guitar comes in has shred written on it!

The first thing I noticed when picking up this axe is the ingenious 'Stephens Extended Cutaway' design. It has to be seen to be believed! This design idea was conceived by Seattle-based luthier Stephen Davies and first appeared on the Nuno Bettencourt N4 (see our Nuno Bettencourt interview and reviews in GI 29 - Ed). This unique bolt-on method allows for effortless access to the upper frets by giving the neck a consistent feel all the way up to the 24th fret, there is no gradual rise in thickness. It's all neck right up to the unique bolt-on joint.

Talking about the neck, we have big fat frets to help with bending, intonation and playability. The neck is made out of maple with an ebony fingerboard, the mix of maple and ebony gives the tone a snappy quick attack which is very useful for Rock and Metal styles. Unusually for a metal/shred guitar, this instrument offers a hard tail/string through construction, with the use of a rugged and easy to adjust bridge. Intonation can easily be adjusted via the Phillips screws located at the back of the bridge and the action can be adjusted in the traditional way via very small Allen key bolts on top of each string saddle. The guitar comes strung with D’Addario strings 9-42 and the action was already pretty good for my own personal preference when I got it out of the box.

It's worth noting that like most Washburns, this Parallaxe benefits from the Buzz Feiten system which is designed to insure it is in tune all the way up the work. Does it work? Well this one was, so we'd have to say yes!

The guitar comes equipped with two Seymour Duncan designed passive pickups, both fairly high output, but low enough to keep things sounding clear. The bridge pickup is significantly hotter than the neck which has a nice sustain. These two pickups are controlled by a three way selector switch, a volume and a push pull tone pot. The push pull tone control selects between humbucking and single coil type sounds. The single coil sounds are convincing when the volume control is rolled back slightly to enhance the high end. These pickups are pretty versatile. While messing around with the tone knob I was able to get a nice clean jazzy clean sound, so I can imagine this guitar would be useful for progressive Rock/Metal styles which need these extreme changes in tone from extreme Metal to nice mellow cleans that don’t sound too thin and chirpy.

The headstock features the classic Washburn logo and six Grover tuners which have an 18:1 ratio, meaning they're nice and accurate. They shouldn’t slip too much in other words! The headstock itself is classically pointed, as we have come to expect from extreme shred guitars. My only little issue with this was there was hardly any room for me to use a clip-on tuner, I know its subjective and if you are playing this type of guitar you are probably using a pedal board with a on floor tuner or even a rack mount tuner, so it's really no issue, and the design looks mean!

In summary this is a solid, shred-metal axe which is very playable, seems very rugged, offers great sounds and sells at a very reasonable price. If Washburn is out to appeal to the hard working shredder who doesn't have a gigantic bank balance, I'd say the company has got it just about right. It's black, it's mean, it sounds hot, it does exactly what it says on the box - literally!