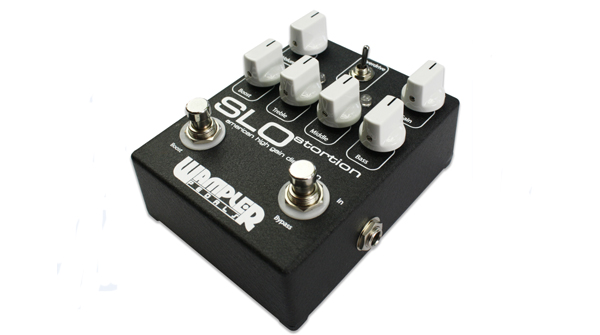 Brian Wampler knows a lot about capturing the sound and feel of an amp in a stomp box. He's had plenty of practice, and the results speak (and sing, scream, and roar!) for themselves. When he puts his mind to making an amp-in-a-box pedal, you're not getting just another distortion. You're getting a master class in tone.

Somewhere between the classic distortion tones and the ultra-modern high gain sound, there was an American amplifier that redefined gain. Soldano® amplifiers have been heard on some of the best guitar-god albums, and Brian couldn't resist the challenge of capturing an authentic SLO-100® inspired tone in a pedal. Brian's refined ear and wealth of experience designing pedals has led him to take what he feels are the killer tones of that amp and bring them under foot for guitarists with any setup.

The SLOstortion brings the awesome tone of those killer high-wattage heads and famous preamps together into one package, with a voicing that will be maintained across virtually any setup. No need to worry whether you'll have a good clean tone and a good distorted tone. Just your favorite amp and the SLOstortion to take your tone places walked by some of the best guitar-slingers from the 1980s to today.

It features a sophisticated but very easy to use three-band EQ to make sure you can have "The Tone" through YOUR setup, whatever it may be. The SLOstortion's dirt is switchable between two separate gain pathways to capture as precisely as possible the nuances and flavor of its inspiration. The normal mode will go from a nearly clean tone to a great, saturated crunch, and the high gain mode will punish your speakers in the best way possible. The sound will remain responsive to your playing dynamics and guitar volume and tone changes, and even when the tone is as heavy as it gets, the pedal doesn't squeal and hiss with noise. No sacrifices for your rig.

As if that weren't enough, Brian has added a great sounding clean boost to the pedal so you can stand out during solos. It's a special take on an op-amp boost circuit Brian's worked on for some time, and even at unity output, it will add a little something extra to the sound - so you'll stand out for your solo whether you want to blast loud, or just give it that little extra kick. To complete the package, the SLOstortion's main gain doesn't even have to be on for the boost to work. It's a true two-in-one pedal, offering great value: our way of showing our appreciation for the faith you place in our products!

We think you're going to love this one. Brian's worked on it as hard as he's ever worked on anything before, and the results are apparent: an authentic American roar, with all the gain and tonal adjustments you need to take you and your rig wherever you need to go, and reliability that won't let you down. Rock on, powered by the Wampler Pedals SLOstortion!