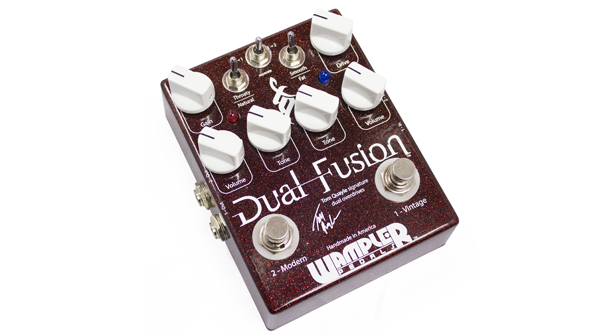 Having already released a host of successful pedals voiced toward the rock/blues market, Wampler has taken a slightly new direction with their latest release, the Dual Fusion pedal. Built in collaboration with UK fusion player and my fellow GI columnist Tom Quayle, the Dual Fusion offers two pedals in one and is specifically voiced toward the modern fusion player. Unveiled at the recent 2013 NAMM show, the pedal features a whole host of stacking/signal path options giving the user more scope to dial in their sound to their needs.

When you are dealing with a pedal which has two independent circuits, you would expect to be faced with a lot of controls and the Dual Fusion obliges. At first glance it might appear confusing but in reality the pedal is thoughtfully and very logically laid out. Essentially, it's a two channel device, based on the same circuitry as two pedals in Wampler's existing range: the Euphoria and the Paisley Overdrive, but with modifications according to Tom Quayle's specifications. The modified circuitry allows for more transparency, with a tighter and controlled response on the bass frequencies than their counterparts and when stacked, offer further possibilities for tone shaping.

For the purposes of simplicity we ran the dual fusion with channel 1 going into channel 2 and set the stacking switch accordingly. Channel 1 sounded very responsive and warm, and with moderate gain settings produced a very transparent sound, which followed my playing dynamics very well indeed. Pushing the gain control a little more, allowed for more bite but the transparency was still evident. Using the guitar volume control also cleaned up the tone beautifully. I was able to get some really nice bluesy lead tones and some lovely cleaner tones just by varying my picking dynamics.

Channel 2 produced slightly more attitude and more gain but still retained that smooth tonal quality. Some great lead tones are to be had here with great sustain and a simple flick of the voicing switch gives access to a slightly more mid-focused sound.

Stacking both channels together gives access to even more gain but never sacrificing the tone along the way. The clarity was always there regardless of which string I was using and even with high gain settings it retained a great level of responsiveness.

I should add that the Dual Fusion comes with a very comprehensive instruction manual/guide, which explains the many options very well. The pedal also benefits from Wampler's '7 day no questions asked' returns policy and a very generous five year warranty.

The Dual Fusion proved itself to be a remarkably versatile pedal and despite its name, is more than capable of producing tones suitable for a variety of musical styles and sounds. The stacking options available coupled with the impressive quality of tones that it is capable of producing make it an exceptionally good pedal. If you are serious pedal user, the Dual Fusion from Wampler is a pedal that should be high on your list of prospective purchases. Quality stuff. Obviously, reviewing products with a fellow GI team member's name on the faceplate is never going to be easy and there will always be some who will assume we were bound to give this newcomer a rave review. All I can say is check out the video! I've reviewed a fair few Wampler pedals for Guitar Interactive and always been equally impressed with all of them. This one is absolutely no exception.