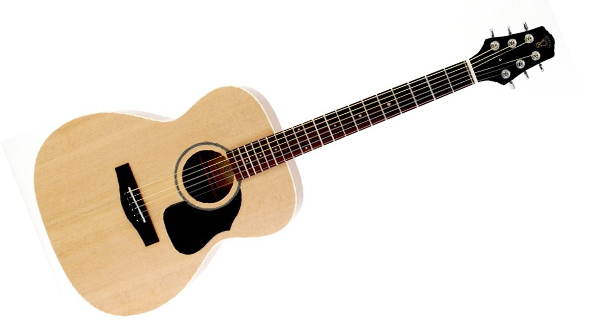 The acoustic guitar isn't always the easiest musical instrument to take on the road. Innately fragile yet often impractically unwieldy once packed securely into a decent guitar case, the acoustic guitar presents a major issue for the travelling guitarist - be it the holidaying hobbiest who simply can't bear to part with their guitar or the touring professional.

Purpose-built travel guitars offer a fairly decent solution but the trade-off for their diminutive size is that sound-wise travel guitars don't really do much to inspire; fine for a quick plonk around in the back of the tour bus, maybe, but that's about as far as it goes.

So what can the travelling guitarist do to happily accommodate a full size acoustic guitar on the road, in the air or at sea? Airport baggage handlers in particular must surely undergo some kind of training course where they learn to single out delicate musical instruments for particularly harsh treatment: I have watched in open mouthed dismay as my guitar was hurled onto a luggage trolley like a sack of potatoes, catapulted from baggage carousels like some unwilling six-string missile launcher or else survived the journey unscathed only to be dumped forlornly in some obscure corner of an airport arrivals lounge. Buying a seat for your guitar on the airplane is an expensive solution but it seems that unless you want to risk inviting the orangutans employed as airport baggage handlers to test the limits of your precious cargo's 'Fragile' label, you have little choice.

Californian based luthier Harvey Leach has come up with an ingenious solution in the shape of the Voyage-Air folding guitar. Leach has some serious pedigree, he has worked as a freelance consultant for Martin Guitars and his inlay work in particular has attracted commissions from the likes of Paul Reed Smith, Collings and D'Angelico; you get the idea.

Originally approached to design a travel guitar for medical engineer Jeff Cohen, who wanted a full-sized acoustic guitar that could be taken on board an airplane, Leach started out experimenting with detachable guitar necks before he hit on the novel idea of using a hinged neck that allowed the guitar to fold away during transport but would simply unfold when it was time to play.

The Voyage-Air VAOM-04 is a full sized Orchestral model that belongs to Voyage-Air's mid priced Songwriter series. The VAOM-04 features a solid spruce top mated to a laminated mahogany back and sides, a nicely rounded 'C' profile mahogany neck and a rosewood fingerboard whose unusual different sized dot inlays reflect the traditional inlay work found on original OM-style guitars made during the 1930s.

The Voyage-Air's unique folding neck pivots on a pair of heavy-duty hinges and is secured by a locking pin that also doubles as the forward strap button. Simply unscrew the locking pin and the neck folds forwards towards the face of the guitar, effectively reducing its length by around 50%. It is advisable to de-tune the strings to decrease the string tension and thus reduce the risk of the neck suddenly springing forward once unlocked but to be fair Leach has already anticipated this potential problem and the folding mechanism includes a detent that prevents the unlocked neck from snapping out of its snug niche like a jack-in-a-box and KO'ing the guitarist straight in the face!

Unfolding the guitar and returning it to its playable state is equally swift and painless. As the neck approaches the fully locked position, a slight but audible 'clunk' tells you that the locking mechanism is almost fully engaged, all the player does is snap the neck into the final position and tighten up the locking nut/strap button. Hey presto! You're ready to play! It really is that simple.

In fact, it is even possible to unlock the neck and then return it to the full playing position without needing to de-tune the strings; there is a little more resistance to contend with from the extra string tension but the mechanism still works exactly the same.

Obviously, the guitar needs to be ready to play almost from the moment that the player locks the neck in place so each individual string threads through a corresponding hole drilled in the special top nut that fully encloses the strings instead of traditional nut slots. In use it is virtually impossible to tell the difference between the Voyage-Air's enclosed nut and a conventional nut, which is of course exactly as it should be.

In fact, our test guitar even came back to the playing position almost fully in tune, only requiring a quick tweak to reset the tuning properly - quite amazing!

Once unfolded, it is practically impossible to tell the difference between the Voyage-Air and a regular OM-style guitar. The hinged neck join is practically invisible and the neck feels completely normal. The full size 25.5-inch scale and traditional spruce and mahogany blend delivers a warm and resonant tone that the OM-style translates into a bright punchy performance and a lively sound that doesn't suggest that there is anything remotely unusual about its construction.

The OM-style is a versatile design that maybe doesn't quite match a dreadnought for the sheer power but in terms of detail and projection it doesn't leave the player wanting. The VAOM-04 could be said to be more of an acoustic 'lead guitarists' guitar; the OM-style was originally developed to allow the guitarist to occupy the lead voice in dance orchestras and so it really suits the type of player who prefers plenty of top end bite. Likewise, finger style guitarists will probably appreciate the sparkly highs and warm dynamic mid-range. There is a slight rawness in the upper register that could be described as a little unsophisticated but it is nevertheless a quality tone that will only improve with age.

Voyage-Air has succeeded in its goal of delivering a decent quality, good sounding acoustic guitar that folds away neatly into a soft bag that is roughly the equivalent of a good-sized rucksack. You can take it on board an aircraft as hand luggage or even if you just enjoy the extra space in the back of your regular family hatchback during your regular weekend gig, this guitar does offer great value for money and it really works. To say the Gi team was stunned would be a serious understatement.