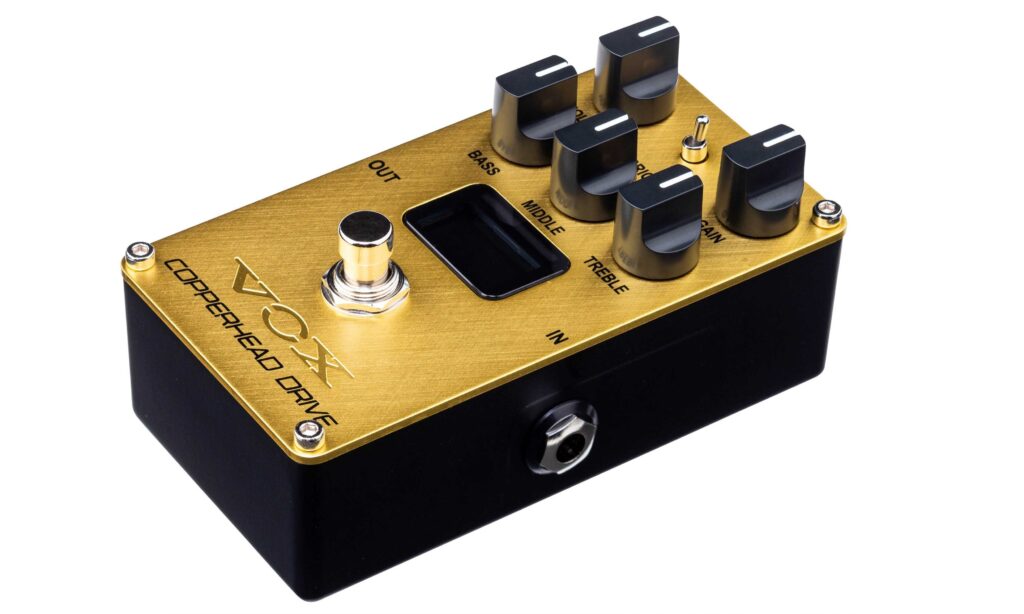 In addition to producing traditional tube amps that use conventional vacuum tubes, the good people at VOX have also been developing revolutionary amplifiers that use Nutube. Taking advantage of the technology obtained through the research of these amps, VOX has now developed a line of pedals: the VOX Valvenergy series. Nick Jennison continues our look at this range with his reviews of the VOX Cutting Edge & Copperhead Drive Pedals.

It's become common practice for guitarists to use gain pedals as the core of their tone. Not only does this approach make travelling way easier, but it offers tons of tonal versatility. In the good old days, going from an AC-30 tone to a hot-rodded Plexi required you not only to own and maintain both amps but to carry them to and from the gig, hook them up without getting lost in a sea of buzz and hum and endure the withering scorn of both the sound engineer and your bandmates as you crank both amps up to find their "sweet spot" - assuming both amps sound great at the same volume, that is. Nowadays, we just stomp on a pedal. A more enlightened time, for sure.

Of course, the reason loud, lairy valve amplifiers still exist is because they sound and feel fantastic in a way that most pedals can't touch. Some pedals will use traditional vacuum tubes to capture some of the magic, but this comes with its own problems - heat, voltage, size, fragility and expense, to name but a few.

Vox to the rescue. Parent company KORG's Nutube technology behaves in a very similar way to a vacuum tube, but because it's based on fluorescent display technology, it doesn't require a heater. This means it takes up way less space, doesn't require ventilation and can run happily on a standard 9v power supply. This technology is at the heart of the four pedals in their new Valvenergy range: the Dumble-ish "Silk Drive", AC-30 inspired "Mystic Edge", and two flavours of high gain - the British sounding "Copperhead Drive" and American "Cutting Edge". Being the gain-hound I am; naturally, I decided to look at the latter pair.

Both pedals share a number of common features, with knobs for gain, volume and three-band EQ, with a "bright" switch on the Copperhead Drive and a "tight" knob in its place on the Mystic Edge. There's also a very cool waveform display that shows you precisely what the Nutube is doing to your tone. On the top, there are a couple of features that greatly expand the functionality of these pedals.

Firstly, there's a switch to select between three operation modes: "Standard" (for running into the front of an amp), "Preamp" (for running into your amp's FX return or with your favourite cab sim/IRs) and "Cab Sim" (for going direct without needing additional hardware). This unprecedented level of versatility means you can run these pedals as part of a traditional guitar rig with your favourite amp, but if your amp goes down in the heat of battle, you can flip the switch to "Cab Sim" and go straight to FOH and finish the gig. It also opens up a ton of possibilities for recording, either with the built-in cab sim or your favourite IRs in "Preamp" mode.

The second unique feature is the "Link" function. By connecting two or more pedals using the 1/8" jack, switching one of the pedals on will automatically bypass the others - just like switching channels on a traditional guitar amp.

Of course, all the impressive features in the world are no good if these pedals don't sound good - and oh man, do they sound good! Vox has long been the unsung heroes of amp modelling, with some of the most organic sounding and feeling models out there, and these pedals are no exception. Both pedals have a superb, bouncy response that's both dynamic and very forgiving under the fingers. The Copperhead Drive will take you from snappy Plexi and 800 tones through to a modern Friedman-like roar, while the Cutting Edge has Rectifier sludge at one end of the "tight" knob and ENGL-style focus at the other. Perhaps most importantly, though, both pedals feel "right", no matter where you set the controls. Extremely impressive.

Vox's Valvenergy pedals are some of the most inspiring gain pedals I've ever played. They sound killer, feel amazing and offer unreal levels of versatility. If you're a gain freak like me, you need these pedals in your arsenal - and if you're not, you need to check out the other two! Very highly recommended.