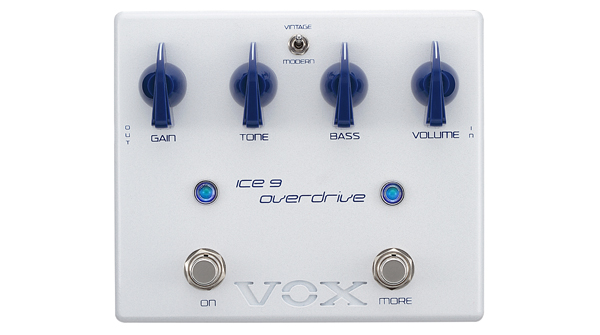 Chicken-head pointers lead the way once again with this second Vox Satriani fuzz box (to give them the original retro name!). This one's an overdrive and is built to the same physical specs as the Satchurator, which means it should be sturdy enough for most users. Versatility is the key offering here, with Gain, Volume, Tone and Bass controls, plus the 'More' switch, which we liked so much on the Satchurator, but with a switchable 'Vintage/Modern' switch, in place of the Pad.

The fun here comes from having so many variables to play with - this really is quite a versatile pedal, as Danny shows. If you want to, you can get hooligan tones but you can also switch over from the 'modern' setting to the 'vintage' - as Danny does in his demo - to tone down the the excesses. Danny's take was that this is one is that it stands comparison with that benchmark among distortions - the Ibanez Tube Screamer. What the Vox offers is enhanced versatility, again with lots of variation on tap. That said, Danny wasn't quite so thrilled with this as he was the Satchurator.