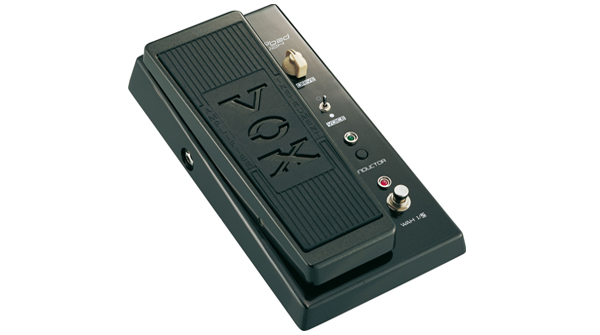 Wah seems to be the effect that will not die. When it first appeared, back in the 1960s, you might have thought it a gimmick that wouldn't stand the test of time. As it is, wah has gone on to be one of the classics - and this pedal is Joe Satriani and Vox's take on it.

Essentially, a wah is a pretty simple device but Vox has decided, once more, to make this a fairly versatile unit. The Big Bad has two modes, the traditional Vox sound (they made one of the very first wah pedals, so know whereof they speak) plus a hot-rodded setting that is altogether more Joe.

The controls on offer are a Drive knob, Voice toggle switch, an Inductor switch and a Wah 1-2 switch.

You might, or might not, enjoy having so much versatility on tap from a wah- there are two schools of thought, after all. One is that 'more is less' and that all you really want is a simple pedal that you can stamp on and get a great sound, with nothing to go wrong on stage. The other view is that having a pedal you can set to precisely your chosen settings is the ideal. Your money - your choice.

We liked this Vox a lot. As Danny says, it's a very versatile unit with old and new sounds - even unique sounds of your own. Danny's view? Well worth the asking price, though he did feel it wasn't quite as sturdy as some he's played. But for tone? It's just fine.