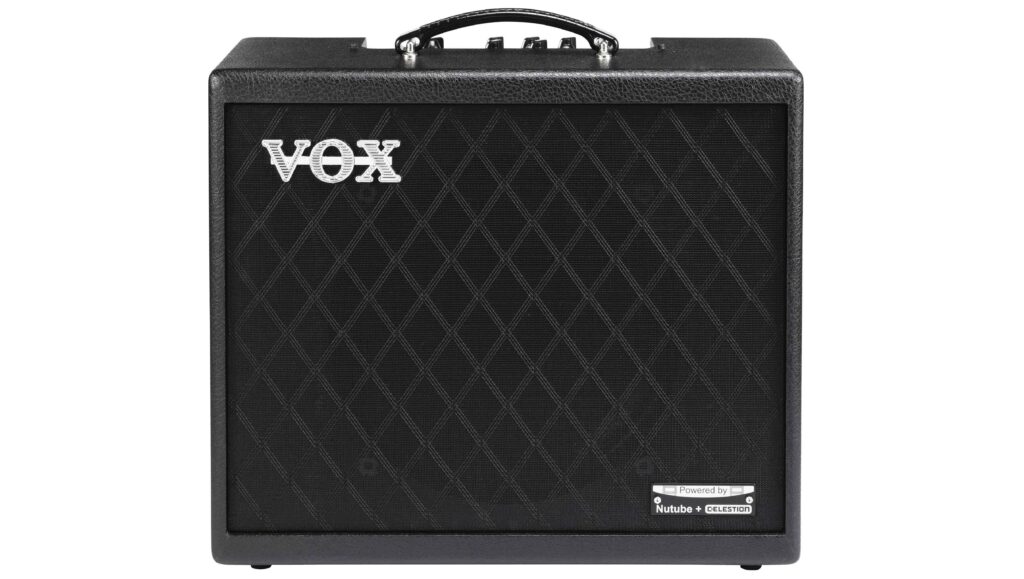 Tom Quayle reviews the Vox Cambridge 50 1x12 Modeling Combo. Loaded with its groundbreaking Virtual Element Technology (VET) that can model guitar amplifiers and effect circuits down to a component level, the Cambridge 50 aims to give you the playing experience like that of playing through a great tube amp and a stack of stomps at your feet. Tom tells us more.

VOX has had their hand in the digital modelling world for some time now thanks to the company's VET or 'Virtual Element Technology' – designed to emulate the entire signal chain at a component level from the original circuit all the way through to the cabinet and speaker. It has been used for some time now in their VTX and VT range of amplifiers for authentic modelled tube tones.

The latest addition to the range is Vox's Cambridge 50 amplifier – a 50w digital modelling combo utilising VET and NuTube technology, along with an open back cabinet design for what Vox says, 'opens new possibilities in a modelling guitar amp'.

We've seen NuTube tech in a few guitar products now from Vox and other companies. In essence, it provides the same essential feel and response as a traditional amplifier vacuum tube but in a much smaller package that is more cost-effective and maintenance-free. It works well and is used in both budget-minded modelling amps and high-end portable preamps/pedals from various companies with great success.

The Cambridge 50 sits at the affordable end of the spectrum but has a ton of well thought out, intuitive features and enough genuine power to be used in a bedroom or loud stage with equal authority. Build quality is budget minded with a lightweight design and lots of plastic everywhere, but everything feels robust, reliable and well built, and all the controls respond well with a much better design aesthetic than previous Vox products in this sector of the market.

Vox has supplied the Cambridge 50 with 11 different amp models including cleans, classic AC30 and AC30 Top Boost, Brit 1959 Plexi and 800 variants and higher gain SLO and Double Rectifier models. The Line model allows for a flat response input for keyboards or acoustic guitars whilst gain, treble, bass and volume controls shape your tone further as required. Below the EQ controls you'll find two rotary dials controlling Modulations and Delay/Reverb respectively. These are the 'dial clockwise for more' type controls, each with four effect types onboard and, whilst they don't offer a lot of control, the included Tone Room software allows more detailed parameter tweaking and a preset librarian via USB. The USB socket also turns the Cambridge 50 into an audio interface for recording.

A very cool addition is the Power Level dial, allowing users to dial the output power from zero to 50w and anywhere in between. The Cambridge 50 is very loud and functions like a real tube amp in that it needs the volume control to be cranked to achieve simulated power-tube overdrive and compression, so being able to dial the power back is a great feature that makes the amp suitable for a range of environments from bedroom to stage. Tap tempo and a Program switch allow you to dial in specific delay times and save presets onboard, however,these functions really require a footswitch for live use, and that will set you back some extra cash as it's not included in the box – a real shame even at this price point. Vox have also included a simple onboard tuner, Aux input and headphones out that doubles as a cabinet simulated line out. Overall, this is a very intuitive and simple control layout that can be operated without going anywhere near the manual.

Starting with the AC30 models, it is impressive how well VOX have modelled the inherent chime and break up of their flagship classics in such an affordable amp. The Celestion VX12 speaker has a definite spikiness to its high end that can become a little grating at lower volumes and especially with the higher gain amps, but it is easily dialled out with the tone controls and becomes really useful at louder volumes, competing with the rest of a band. The cleans range from super-spanky to edge of breakup chime whilst there is an insane amount of gain available from the Double Rec and SL-OD models. This is certainly a highly versatile amp, but you will need that VFS5 footswitch to make the most of it on a gig.

The effects all sound good for a budget-oriented amp too. Reverbs and delays are all inspiring, and the modulations sound warm and convincing with all the obvious bases covered for most songs and tones. For extra value Vox have included their JamVOX III modelling software (PC only), allowing you to get classic Vox tones on your computer or in your DAW alongside some useful practice tools.

If you're looking for an amp that doubles duty as a live and practice tool and you're a fan of those classic VOX tones, the Cambridge 30 is well worth a look. It has tons of cool tones, an intuitive layout and is very lightweight for a loud 50w combo. It is just a shame that VOX couldn't include that footswitch in with the bargain, but maybe I'm asking for too much? Well worth a look either way.