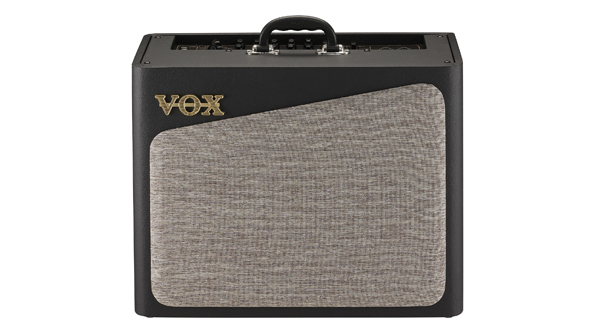 AV30? Doesn't Vox mean the AC30? Apparently not, as Lewis Turner finds out when he comes face to face with a new modelling idea.

Small portable combo amps are enjoying a huge revival at the moment thanks to the massive improvements in both amp and PA technology we have seen in the past decade or so. With modern PA systems you no longer need huge backline rigs and with modern combos the range of sounds you can get is extraordinarily wide. Most valve amps start to find their sweet spot and “that” tone once they are pushed and turned up, which is often too loud for comfortable use these days, which is where the lower output valve amp comes into its own. Many players now gig with a far smaller combo than they used to and augment it with a selection of pedals. This is an area Vox understands well. Like Fender, it never did manage to crack the giant stack market when it appeared in the 1960s and has always excelled instead at smaller, tasty, combos.

Which brings us to the brand new Vox AV30 - a 30 Watt combo and part of the new AV series that offers 15, 30 and 60 Watt models. It's important to stress that this little combo is a fully featured analogue amp - it is a far cry from the solid state and software modelling offerings we have seen and on that basis, Vox is claiming it is something very different.

The AV30's unique multi-circuit analogue pre-amp utilizes a 12AX7 tube to provide clean, crunch, overdrive and high gain tones that can then be further tailored using the Bright and Fat switches. There is also a power amp section where another 12AX7 is hidden to further enhance the tones. There are eight different tone settings, Clean 1, Clean 2, Crunch 1, Crunch 2, Overdrive 1, Overdrive 2, High gain 1 and High gain 2, complete with a three band EQ, gain and volume control.

This is a two channel amp (A and B) both channels offering exactly the same tone options, EQ and individual volume, so you could set one channel as your lead and one as rhythm. It can be switched via a footswitch but you have to buy this separately.... Hmm, that old chestnut. Rounding off the features there are three analogue voiced digital controls Chorus (mod), Delay and Reverb.

Vox has gone to quite a bit of effort with the housing of the Vox original 10” 4 Ohms speaker. The speaker is installed from the front so that sound will emanate from a projecting position, creating a wider sound field, Vox says, and a sound post is used to unify the vibrations of the rear. The speaker is mounted asymmetrically and directly onto the cabinet frame. This sounds impressive in theory, but does it make for a great sounding amp? We'll find out.

First up let me say that I think this is one of the best looking and finished combos on the market, with a fantastic smart grill and easy layout of controls. It's light, too.

Going through the different tone settings, the AV30 delivers all those classic sounds that I hoped it would. The cleans were clear and bell like, the Crunch nice and bluesy, with the Overdrive taking it into Brian May territory. I have to say that the high gain setting however were a little disappointing. Frankly, it was a bit too fizzy and thin and despite playing around with various EQ settings, I couldn't find a way around that and this is not the sound that a hard-core metal head will be wanting. Then again Vox has never really been about that, so I'm not sure why the designer even attempted to go down that route (probably told to by the marketing department - Ed). What this means is that if you wanted to use this amp for high gain stuff then you are going to need to put your favourite distortion pedal in front of it. That isn't actually a problem because the AV30 has such a great speaker and resonance that I have no doubt it will excel with a few external pedals, as the basic tones are so good. The on board effects are very good and easy to use, by the way.

Hands up that I'm a bit of a sucker for a great valve amp, and even more so for the small crunchy ones, and that's what this little amp does well. Fantastic clean and crunch tones, coupled with good onboard effects and a quality speaker. The only thing that lets it down is the high gain sound. Other than that the AV30 is a great looking and sounding combo, perfect as a practice amp or a portable gigging tool. Horses for course and if this sounds like your thing, then check it out – unless you are into head banging, it's definitely worth checking out.