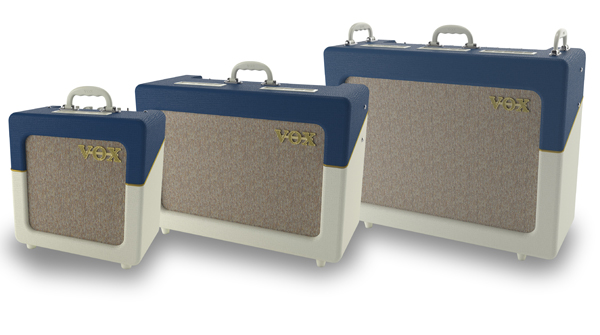 Little amps are all the rage - especially little valve amps. Gone are the days where you need 16 100 Watt heads with matching 4x12 cabs. Even with the guys that claim to use that kind of set-up you will find 15 of them are just for show. It may not look as cool to have a amp the size of a large toaster on the stage, but its far cooler than putting out your back lugging heads and cabs up 32 flights of stairs for a 30 minute set. Get a good little amp, with some great pedals in front of it miked to a good PA and hey presto - tone heaven! That's the theory, at any rate.

Vox is very much at the forefront of this area with a number of great little combo amps to choose from. This AC4 is from the latest line up consisting of three models rated at 4W, 15W and 30W. We are checking out the baby of the line-up. Be sure to have a look at the video where you can hear the amp in action.

First appearing in the 1960s, Vox's two-tone coloured amps were not what the company was most famous for - but they are very collectible now! At the time, everyone wanted the black with diamond grille cloth amps as used by that band from Liverpool. But the two-tone models had a following as well and these newcomers replicate that look very carefully, from the grey and blue colouring and gold piping and the instantly recognisable retro TV-front design of the cabinet. That word “retro” is currently very popular in guitar world, be it pedals, guitars or in this case amps. Was the old stuff really that much better or is it just a case of rose tinted glasses? (rose tinted binoculars - trust me! Ed)

Most people agree the best thing about valve amps is that slightly broken up sound as you push them past a certain volume. The trouble is that valve amps are very powerful and trying to push a 100 or even 40 Watt valve amp to that point in a small room will make you deaf long before you have the chance to bathe in its tonal glory, which is why small ones are popular - they deliver nice broken up tones without the side effects of bleeding ears.

This little Vox is the ultimate in plug in and play simplicity. One input, a Gain, Bass, Treble, Volume control and an on off switch: fantastic! The pre-amp is powered by a pair of 12AX7 valves and a single EL84, running through a 10” Celestion VX10 custom speaker. There is also an external speaker output if you wish to run it through a different/larger speaker.

You might expect this amp to sound a little “boxy” because of its size, but that's really not the case. The quality speaker and cabinet construction really project the sound well, with a surprising amount of bottom end for its size. With the Gain control down, it's fair to say that you have to push the Volume a fair way to get any kind of reasonable output from it. If you are looking for pristine cleans that will cut through the mix at a decent level then you may want to go to one of the bigger options as there really isn’t a great deal of headroom here. That said, with the Gain below 12 O'clock you can achieve a nice cleanish tone with more output.

The interesting/cool stuff starts to happen once you push that gain past that point. The Gain controls the pre-amp volume and will determine the amount of pre-amp distortion. At the middle point is where you start to get that broken up sound and plenty of volume allowing you to back down the master volume giving much more headroom. This is the perfect tone for crunchy chords and sounds great for beefing-up rhythm lines, pushing it beyond that and you start to get the bluesy lead tones and plenty of volume to make your solos cut through. Just a two band EQ of Treble and bass on this amp, a middle would have been nice, but the tone controls worked well and give you plenty to play with. Pushing the gain right to the max, it's amazing how much volume this little amp can produce, and it’s still good usable volume that doesn’t turn to mush. It won't give you a big saturated gain sound that suits Metal but then that's not what this amp is about. And, of course, the AC4 is very responsive and reacts well to your picking dynamics as all good valve amps should.

The Vox AC4 is perfect as a little practice amp with tones that will put a smile on your face and encourage you to play. It's also much more than that. As a stand alone amp, you could gig this in a little club as part of a duo, guitar and vocals, or two guitars, and it will cut through just fine. Put some good pedals in front of it miked up to a good PA and you have a great little gigging amp for a small band line up. Well built, great looks and fantastic authentic sounds, a top class portable little valve amp.