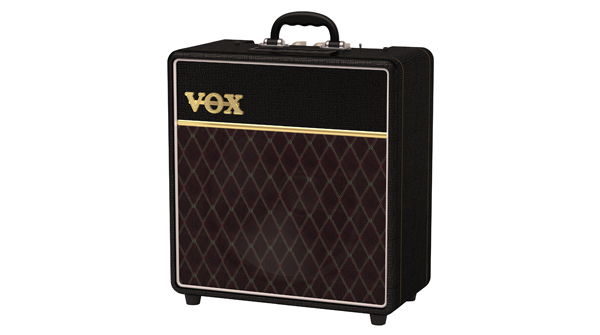 Small combo amps are enjoying a huge revival at the moment. Thanks to the tremendous improvements in both amp technology and PA systems, it's often no longer necessary to lug around a 100 Watt head and 4x12 Cab. You can have a small amp that works fine at home or in the studio and can also be used on stage, with your PA providing the muscle. Most valve amps start to find their sweet spot and “that” tone once they're pushed and turned up, so many players now gig with a far smaller combo then they used to, using a selection of pedals, miked into a good PA and bingo, the perfect tone!

Catering for this market, there are many great solid-state combos that offer excellent sound and many built in effects but new all-valve combos are a little on the rarer side, and great ones are in rarer still. That's the demand Vox is looking to cater for with this new model, the AC4C1-12.

The Vox AC4C1-12 is a 4 Watt combo with a 12” Celestion VX12 speaker. Among the various Vox tube amps, the AC4 has been one of the most popular, providing a simple and hassle-free way to enjoy the rich sound of a tube driven amp. What sets this new version apart is that speaker - previous versions featured a 10” type. Powered by two 12 AX7 Pre-amp tubes and one EL 84 Power amp tube, on paper this little amp should provide plenty of punch and the right kind of breaking-up tone that makes tube amps so loveable.

From the start, this amp looks great with its diamond grille cloth and basket-weave vinyl exterior, carrying on the classic looks of the Vox tradition. A simple control layout makes this very much a plug in and play set-up, with just Gain, Bass, Treble and Volume to worry about. I experiment with various settings on the video to obtain different sounds, so be sure to give it a watch.

The straight up clean sound with the gain down low was as you would expect - clear and bell-like, with a sense of plenty of power and dynamic range, giving you confidence that your sound would cut through in a band mix. Despite delivering just 4 Watts there is plenty of power and volume on offer depending on how you set up the EQ. One of my favourite/most effective settings on this kind of amp is to turn the gain right up, then use the volume as a master control (with the gain up high on this amp you start to hear just how loud 4 Watts can be...), then use the guitar volume control to clean up the signal. You will find that on most guitars if you back the volume down to around 6 you won't actually lose that much output, but it will clean up your signal a fair amount. Meaning you can leave the gain up on the amp, then have complete control over how much crunch you deliver by working your guitar volume control.

This technique worked fantastically well with this amp. I was able to go from clean to crunch to full out Rock without having to touch the amp controls. This is what makes a good valve amp great - the way they react and feel to your playing style and touch, and the AC4 sounded and felt great, giving that legendary Top Boost tone inherited from the AC30. It's never going to be a full on Metal saturated lead amp, but, that said, a careful selection of stomp boxes in front of it could make that happen.

The 12” Celestion is a great speaker that sounded warm and projected well, offering plenty of bottom end and never sounding “boxy”. It would have been nice to have a Middle control to really tweak the EQ, and other amps this size often include a good built in reverb, which the AC4 doesn’t have. It would also have been nice to have tried this version side by side with a 10” speakered one but that wasn't possible, so our collective feeling down at GI Towers is that this version would sound better due to the extra openness a 12” speaker delivers and could very possibly be louder too. Try one side by side in a store and see what you think, but our guess would be that the 12” version will have the edge.

I put my hands up to being a bit of a sucker for a great valve amp, and even more so for the small crunchy ones, so this Vox ticked all the boxes for me. I love that the tones and dynamics have to come from you, rather than via a processed sound. Sure, the sounds are limited and if you don’t have effects pedals then there is only going to be so much you can do. But what the AC4C1-12 does do is give you a fantastic foundation of tone, from which you can continue to build. Whether it's as a practice amp, recording, or performing you won’t be disappointed with this little power house.