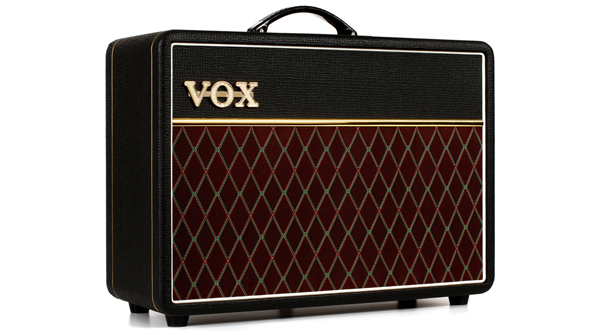 The Vox AC10 was one of the earlier amplifiers produced by the company but never reached the same status as the coveted AC15 model that has become one of the most revered guitar amplifiers ever made. The AC10 was a lower powered version of that classic Top Boost tone circuit amplifier but was discontinued in 1965 in favour of its higher powered sibling that went on to be the basis for some of the greatest guitar tones of all time. However, the AC10 was also very much loved at the time for its ability to reach the tonal characteristics of the AC15 but at more manageable volumes on stage and in the studio.

For 2015 the AC10 has been resurrected in the form of the very affordable AC10C1 – AC10 Custom. This is essentially a smaller, more portable and lower powered version of the AC15, sitting between this and the low powered AC4 amplifiers. The design is simple with a single channel set-up powered by a pair of 12AX7 (ECC83) preamp tubes and a pair of EL84 power tubes providing 10W RMS of output through the custom 1x10 Celestion speaker. 10 Watts may not sound like a lot, but this is a very loud little amplifier, so Vox has very wisely included a Master Volume for this new model allowing you to crank the pre-amp stage while setting the power to a manageable level for whatever musical scenario you find yourself in. There is no Normal channel from the larger AC15, but the Top Boost circuit provides a wide range of clean and dirty tones so is all you really need here.

The controls are equally simple with a dual band treble and bass EQ, Gain, Reverb and that Master Volume for shaping your tone. Different tones are achieved through a balancing of the master and gain controls, and while the treble and bass controls do a great job, a mid EQ would have been a nice addition for further shaping the tone, although it wasn’t included on the original either. A single power switch is included with a delayed standby mode to save your tubes.

The construction is very good, with the classic Vox look immediately recognisable thanks to its diamond pattern grille cloth, black tolex and gold Vox logo. The leather carrying handle feels sturdy enough and the controls are very smooth and responsive. Even played at high volumes there are no rattles or extraneous noises to speak of and the whole design feels thoroughly roadworthy, without any complex, multi-channel circuits to go wrong mid gig. This is also a pretty light amplifier considering its all tube design, weighing in at only 12.3kg, perfect for those smaller gigs or studio sessions.

With a simple design like this it all comes down to tone as there are no bells and whistles to attract potential customers with, so how does the AC10C1 perform? Starting with a clean tone, the gain set low and master volume set high it is immediately apparent just how much this amp sparkles and chimes. Classic Vox cleans are present straight away with a load of dynamics that are so much fun to play. At these settings there is plenty of clean headroom from the master volume but you’d be hard pushed to play with a loud drummer on stage if clean tones are your thing or you need a clean amp for running pedals into.

For real volume you need to add in more gain from the pre-amp and then things get dirty pretty quickly, although we’re talking edgy breakup and crunch tones here, rather than high gain territory of course. The crunch tones are gorgeous, especially at this price point but you need to remember that 10 Watts is VERY loud from a valve/tube amp like this and the best tones won’t be achieved at bedroom volumes. This is an amp that is crying out to be cranked, just like the originals. If you can do so you are rewarded with a tone that exhibits impressive amounts of harmonic bloom and detail and cleans up beautifully with the guitar’s volume control and pick dynamics. It’s amazing that you can get this level of tone for such a low asking price.

The onboard reverb is very much appreciated as Vox has neglected to add an FX loop to the AC10C1, an omission that could cause big problems for those with pedal boards wanting to use the full power output of the amp. For home and studio use though, where lower volumes are applicable, the AC10C1 makes a superb pedal platform if the gain is kept low. It’s a shame in a way that the AC10C1 doesn’t have the slightly bassier 12” speaker from the AC15 or even the AC4 but the Celestion speaker still sounds great and the closed back design aids in giving a tight and full bottom end and an external speaker out allows for an extension cab if required.

The AC10C1 is a great sounding little amplifier for not a lot of money. The lack of an FX loop and low volume clean tones may put some off, but the AC10C1 could also be exactly what many guitar players have been waiting for - affordable Vox tone in a smaller package that is loud enough for smaller gigs and sessions. Well worth checking out.