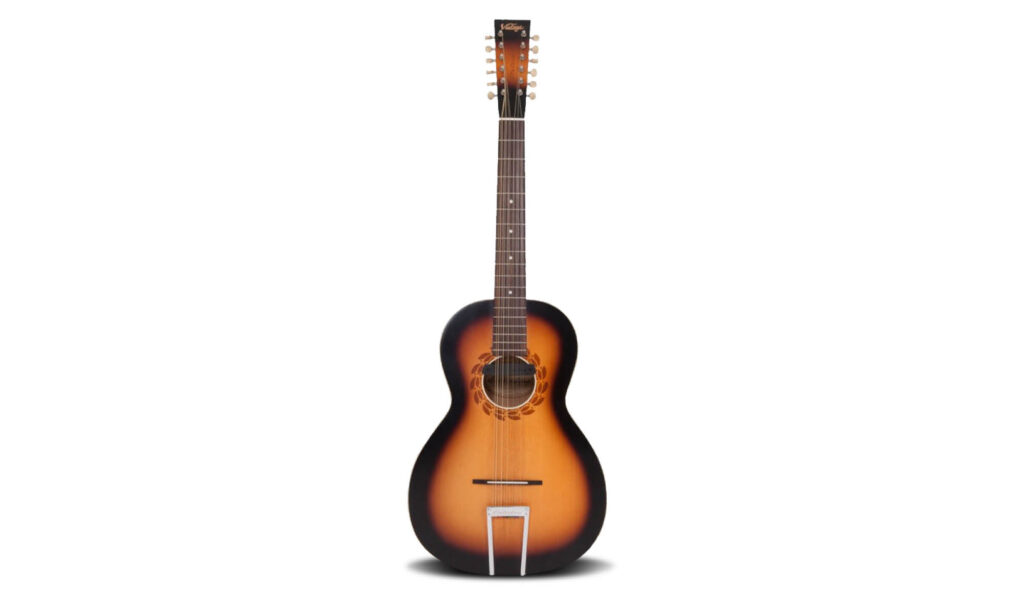 In summary, the Vintage Statesboro 12 String is a robust instrument, well made, well balanced and a pleasure to play.

The finish will divide some
Unstable bridge

As a fitting tribute to the pioneering blues era of the 1930's, Vintage and Paul Brett have set out to design a 12-string that oozes pure nostalgia from every note. Dan Le Gresley puts the 'Statesboro' to the test.

When Blind Willie McTell hitched a ride on the dusty Atlanta railway, from his home town of Thomson Georgia to the big city of Augusta, I do not imagine he ever thought his name would still resonate today. That musician's from across the musical divide would hail him as one of the early pioneers of this most entrenched musical genre is a testament to his legacy. The Piedmont bluesman's reach and influence stretches from the Allman Brothers to The White Stripes via Bob Dylan and countless others.

So when the Vintage Statesboro 12 String arrived in the office last week, I unboxed with youthful glee ready for my homage to the Statesboro Blues. From the moment I pulled the premium tanned hard shell case from its limp card board box, I had a good feeling about what might await inside. So often nowadays, manufacturers, in a bid to cut costs, opt for the ubiquitous soft case. No cost cutting is on show here. Vintage is a brand that continues to surprise, they have come a long way from the cheap Gibson replicas of years past. While they continue to cater for the beginner and budget market their welcome divergence into the mid level player arena is proving fruitful.

The solid yellow tanned case opens to reveals a vivid velvet green interior that sets off the Satin Antique Burst finish with aplomb. The Statesboro is based on the Stella guitars crafted by Oscar Schmidt in the early 20th century, so don't expect many modern appointments, it's extremely straightforward. From the bone nut, solid spruce top, maple back, mahogany sides and neck and vintage tuners, it's a guitar that harkens back to an earlier time. This version is fitted with a Fishman PRO-REP-102 Rare Earth Humbucker Soundhole pickup system, however. A welcomed piece of modernity.

The colouring took me by surprise upon the first inspection, as though the finish was too clean, I yearned for more grain in the spruce top and laminated maple headstock. It's difficult to articulate; it is as though there is a plastic sheen to the entire instrument. It's a small detail but one that has been playing on my mind. Maybe it's the heritage associated with this model or my preconceptions, but stick the Statesboro in the Studio for five years, let the sun dampen her finish and let time take its character building toll, and you'll have something beautiful on your hands...this lady will age well.

Paul Brett has created a faithful blues machine, the body is resonant, and the sound can take you from the delicate and dynamic to full rhythmic strumming boom with ease. Most of the early blues guys tuned at least a tone down from standard tuning and Blind Wille himself liked his tuned to C on the bass. So if you want to recreate his authentic southern ragtime tones, you've got to tune down. In the video, I am playing in open D tuning, and the Statesboro comes alive with a little more give in the strings and more bottom end ringing out.

The neck is a handful (as you would expect from a 12 string), but given its modest parlour sized body, the weight distribution is good. All 12's are heavy on the neck but the Statesboro feels well balanced, and the soft and shallow C neck feels comfortable in the hand, while the body resonates with a pleasant warm hum. It is a balanced tone, mild highs, warm lows that merge into the mids to form a well-mannered instrument that, while pitched to the pioneering blues fans, will be at home in more rhythmical folk situations and Eagles style 70's rock ballads. The one caveat is the bridge.

The rosewood bridge is solidly attached to the body in front of the retro tail piece, it is an aesthetically pleasing combination but one that provides frustration when picking or strumming with intensity. The strings have an unquenching desire to hop out of position, causing momentary confusion and a discordant imbalance in tuning.  My decision to play in open D must play a part in this musical tomfoolery and a few months of 'settling in' will, no doubt, resolve the issue.

In summary, the Vintage Statesboro 12 String is a robust instrument, well made, well balanced and a pleasure to play. She lacks the attention to detail of more premium guitars, and the finish will divide some but at an MSRP of £749 it excellent value for money.  If you are a fan of the blues or even a modern folk style player she's certainly a guitar worth considering. The addition of the Fishman makes this guitar very versatile, giving pleasure at home, on stage or in the studio. 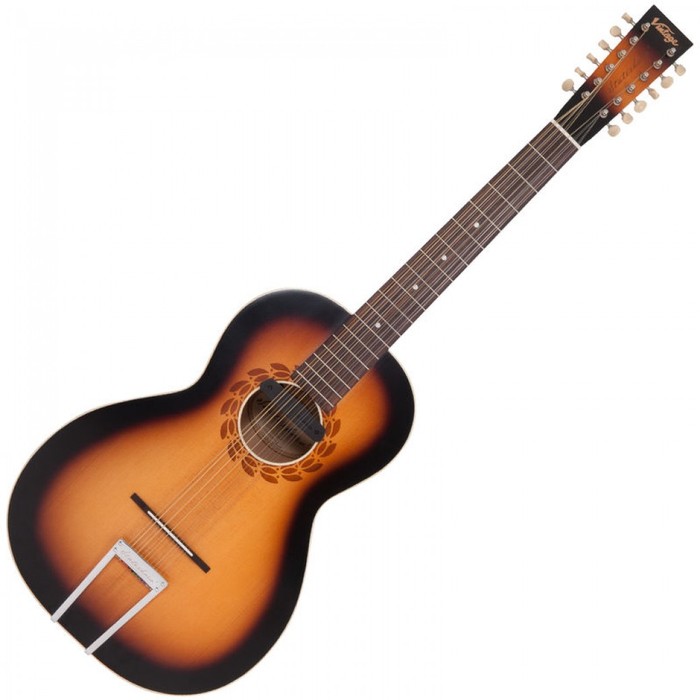 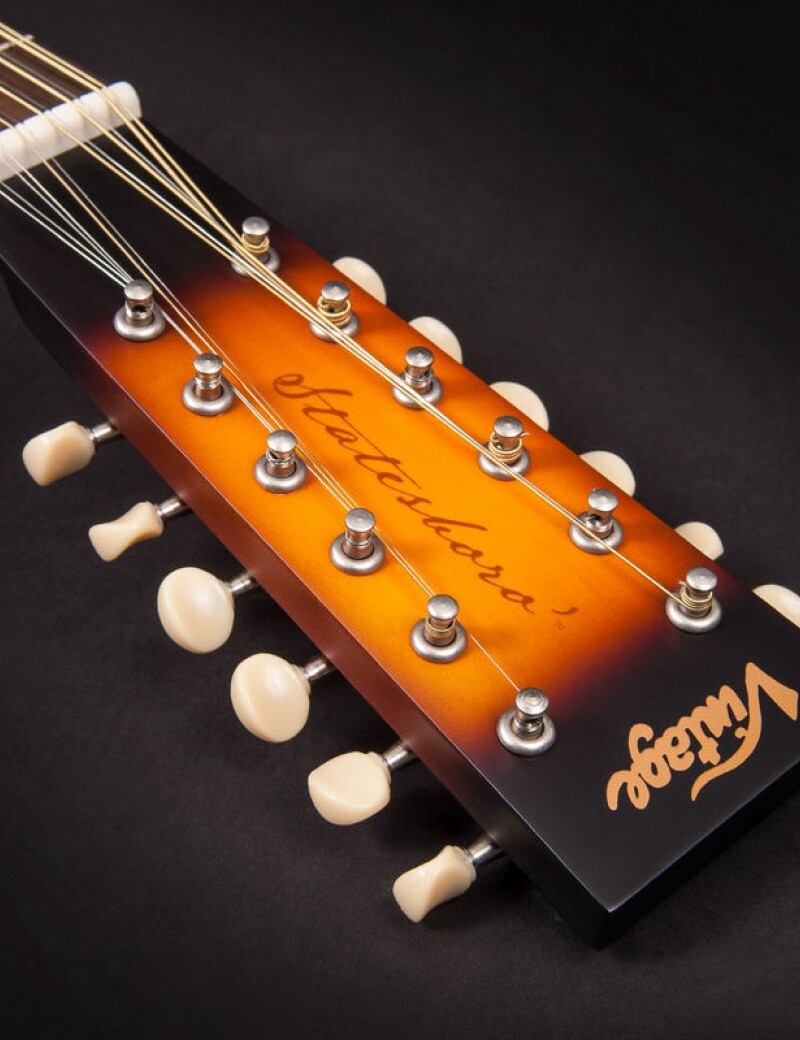 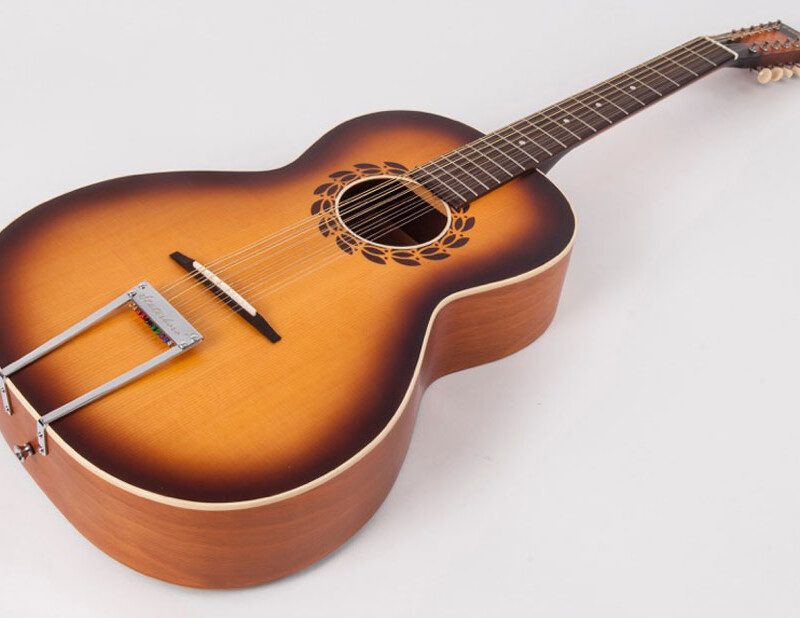 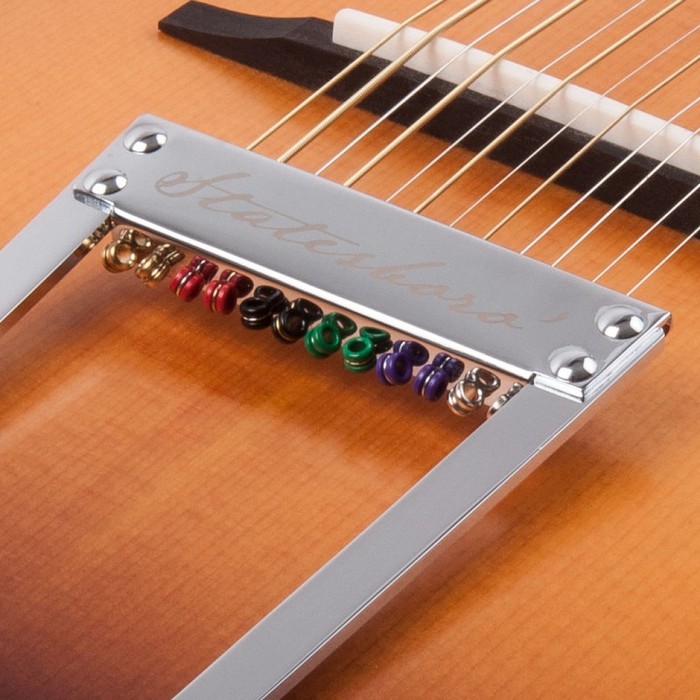