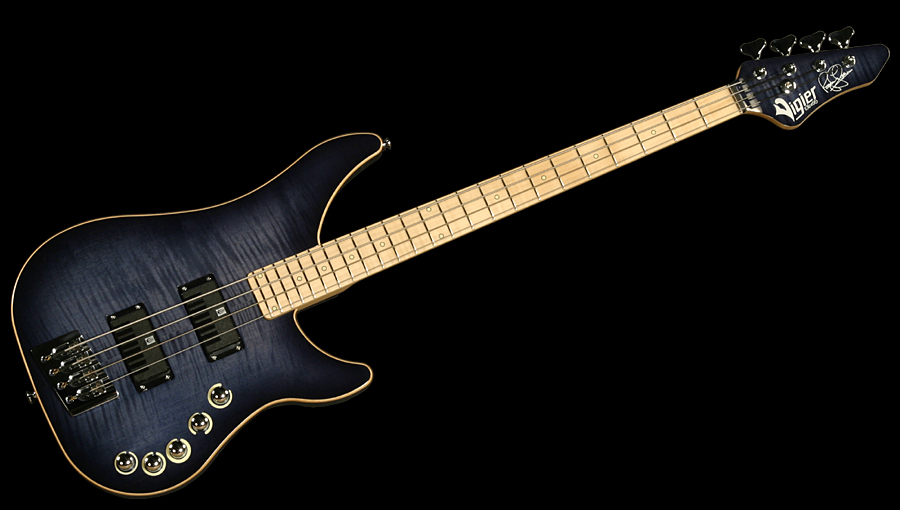 Do we need to introduce Roger Glover? Hopefully, Deep Purple's 100 million album sales world-wide will mean no! But in case you have been living under a rock, Roger Glover is the driving force behind this undoubtedly very successful band but also has many credits for song writing, composing and producing for many artists and bands including Rainbow, Status Quo, Rory Gallagher and Whitesnake. For this issue, we have in for review a bass that he is proud to put his name to.

This isn't the first Vigier bass we've had the pleasure of looking at in the Bassment - in fact it's not even the first Vigier Excess, but this time a truly great bassist puts his signature on the headstock.

Whilst we’re up there admiring that autograph, take a look at that blonde maple neck which is bolted on to an alder body. Fitted with a Rosewood fretboard and 24 flawless frets, the neck is slim, much like all the basses across the Vigier range. Fast play and comfort is aided by the profile but don’t feel that the bass is any less substantial because of this. Patrice Vigier has pioneered a neck construction method called the 10/90 system. On this bass specifically, that means that 90% is aged and dried maple and the rest is that nice big chunk of carbon strip to reinforce the neck instead of using truss rod. I can tell you that the action and set up of this bass out of the box was without issue. Low, smooth, effortless and rock solid. No buzzes or rattles to speak of. It also needs saying that Vigiers are renowned for their stability on the road. Clearly, that ageing and the use of carbon fibre works very well.

Moving down to the body and once again, Vigier choose ‘seasoned’ alder - it’s a great tone wood. The two centre-joined pieces of solid alder are carved to allow for access to the high frets and provide good balance on the knee.

This particular model features a glossy ‘piano black’ finish that I suspect will reflect everything in the studio when seen in the video! As I understand it, Vigier layers over 10 coats of varnish on their instruments and won’t polish until a month later to ensure the customer gets a solid finish that looks superb for years.

The bass wouldn’t be complete without some superior string anchorage duties and we haven't been let down here either. The more basses I review, the more I expect a good solid and well made bridge - but it doesn’t just end there. I want to see something that suits the instrument - yes it’s an extra cost, but doesn’t that bridge look tasteful? Elegant rather than a big cast lump!

Pickups and electronics. First up, those two nice chunky pickups as you’ll hear in the video have a big open and clear sound. Designed by Benedetti, there are, as I understand it, two Alnico 8 magnets per string. Each unit’s pure copper and silver alloys coils are wax potted and quite literally bolted down in the body. I do like having those wide pickups to rest my thumb on too.

Paired to these single coil pickups there is a 3-band EQ pre-amplifier with master volume and pan control. There’s a nice amount of cut and boost on the individual controls and I have to say the EQ centres were brilliant for this bass.

The whole package makes for a pleasing playing experience. The attention to detail is spent on the ‘needs’ on this bass rather than the ‘nice to haves’. This instrument is very much in the premium price bracket, so I would expect it to be flawless - and you can take it from me that it is!

Whether having another player's name on a bass is actually an inducement to buy one, I will leave to you, though as has been pointed out, it doesn't seem to have harmed Les Paul sales, does it? In any case, signature or not, this is an absolutely wonderful instrument that sings with a bright and airy tone that can ‘bring the rumble’ with its effortlessly musical EQ section. A big surprise for me was finding out after reviewing the instrument that the pre-amp was designed with Glockenklang, so that explains it!  I have their pre-amps in two of my basses and they sound great! This is a superb bass - check it out!