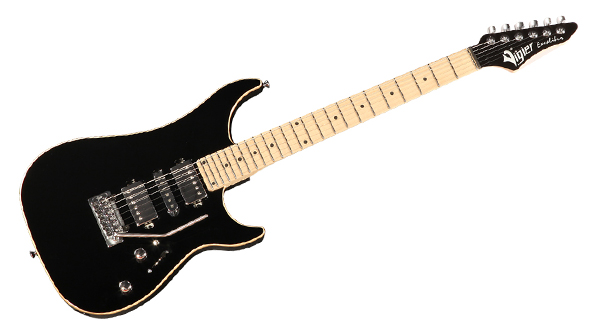 Following GI 33's Ron 'Bumblefoot' Thal extravaganza, how could we not conjure up a pair of Vigier guitars for the following issue? If guitars were cars, Vigiers would be Bugatti Veyrons or McLaren P1s - in other words about as hot as it gets. Tom Quayle reviews two models from one of the world's most exciting guitar makers.

Hand crafted in France by Patrice Vigier and his team, Vigier guitars represent the cutting edge of the boutique guitar market with some truly innovative design features and a distinctive visual style. In 2014 Patrice released two new models and we have been nagging and whining to get our hands on them ever since. There are no depths to which we will not sink! Finally, Vigier sent us the Excalibur Ultra A/P and Excalibur 13 guitars.

The original Vigier Excalibur Ultra was designed as the ultimate, active-EMG based Metal guitar with a penchant for aggressive, high gain tones and the looks to match. Of course, there is a whole swathe of players out there who prefer passive pickups to active ones, so in 2014 Vigier released the 'Ultra Active/Passive' featuring all of the same essential design choices but with passive pickups and a switchable active boost circuit to achieve those uber-high gain tones.

The Excalibur A/P features a two piece naturally aged alder body with a maple top finished in Piano Black. It's worth pointing out that such is Vigier's attention to detail that the wood used is naturally aged for three years. That's the sort of detail you are getting here. The D-shape neck is a bolt-on maple design with a maple or rosewood fretboard and features Vigier's proprietary 10/90 system where a strip of carbon fibre runs through the neck providing greater stability than a traditional truss rod. The Excalibur range also features a hardened zero fret for better intonation and string height across the neck and for models built in 2015 Vigier offers a split, 6-piece zero fret, allowing each section to be swapped out individually as required, saving both time and money compared to a solid fret design. The remaining 24 stainless steel frets are of the medium variety matched with a non-stick, Teflon nut and the neck features a very comfy 12" radius making both chords and lead work a breeze across its range, a sensation aided by the matte varnish finish. Also included are six over-sized locking tuners for superb tuning stability and sustain.

Hardware is all high end, with Vigier's own super-smooth 2011 non-locking, two-point tremolo system and a set of handwound Amber pickups in H/S/H configuration, paired with a 5-way switch and the active boost circuit. A pre-amp gain control can be found recessed into the back panel of the electronics cavity, along with a battery compartment for which Vigier quotes over 1,000 hours of battery life.

Build quality for all Vigier guitars is very much at the boutique end of the scale with exceptional attention to detail in all areas and amazing crafting of all elements of the design. The Excalibur body shape is very ergonomic and comfortable to play, featuring just the right balance of curves and pointy elements to appeal to a wide audience and, whilst the Ultra AP is a relatively plain looking guitar due to the Black finish, little touches such as the scraped binding reveal enough 'boutique' elements to be impressive up close.

In terms of tone, the Ultra AP is a supremely versatile guitar thanks to the H/S/H pickup configuration and 5-way switch. It's easy to achieve anything from thick, saturated humbucking lead tones to clean single coil funk sounds with the flick of a switch and the active boost circuit works superbly for either a lead boost or to add an extra layer of filth on an already dirty amp. With the boost circuit on full gain the amount of drive available from the Amber pickups is incredible and should push even the tamest of amps or pedals into overdriven territory. The pickups are extremely touch sensitive and dynamically open, responding well to volume changes and offer very good levels of clarity even at higher gain settings.

You'd be very hard pushed to find fault with the Excalibur Ultra AP and it works as a fantastic solution for those that loved the idea of the Excalibur Ultra but couldn't work with the active EMGs. Put simply, this is a truly fantastic, modern, high-end guitar. If you can afford a Vigier like this there really is no reason not to bite the bullet. We don't even think it's particularly expensive considering it represents the peak of modern guitar making.

The Excalibur Thirteen was originally introduced at the NAMM show in 2013 as a Limited Edition run in Volcano Red. In 2014 Vigier decided to make the Thirteen a permanent addition to its line up and offer a range of colour options, including our Black Knight review sample.

The Thirteen features a solid, two piece naturally aged alder body in a range of opaque finishes and a maple D-shaped neck with either maple or rosewood fretboard options, again featuring Vigier's unique 10/90 Carbon Fibre system for superb stability. The neck has 24 stainless steel frets and the Vigier zero fret for improved intonation and string height across its range. Hardware is high spec with the Vigier 2011 non locking tremolo bridge, a pair of handwired Amber Rock humbuckers, a kill switch, Teflon nut and oversized, locking tuners. The inclusion of a 5-way switch allows for both humbucking and split single coil tones and Vigier has included the standard Volume and Tone controls all finished in chrome for a modern, clean look.

The Thirteen is built to the usual high standards that Vigier set themselves and is amazingly light for a solid body alder guitar. All construction and finishing is as good as it gets giving you a guitar that both looks and feels worthy of the high price tag. In terms of playability, the Thirteen is one of the most comfortable and playable electric guitars I have ever come across. The Excalibur is beautifully balanced both in seated and standing positions and almost plays itself thanks to the supremely comfortable neck profile and low, even action across the whole instrument. The bridge operates very smoothly and returns perfectly to pitch, even after heavy abuse, and the inclusion of an adjustable screw mounted arm allows you to place the bar tightly wherever you need it to be. Visually, the guitar is very pleasing to the eye with a range of finishes that should suit most tastes, a particular stand out being the suitably Arthurian 'Monarchy Gold', which looks simply stunning.

Tonally, the Thirteen is equally as versatile as the Ultra AP, even without the middle single coil, thanks to the split 2, 3 and 4 positions on the 5-way selector switch. The amount of sustain and resonance from the light weight body is really impressive and the Amber pickups translate this very well into amplified tones. Humbucker tones are full of body but clear and precise in both the neck and bridge positions. There is enough output here to give very convincing heavy tones but not so much that things get muddy and the volume control cleans things up very nicely. The single coil split tones are spanky and tight in all three positions, offering cool Strat like tones from a modern guitar that are really fun to play for both clean and overdriven sounds.

Both the Ultra A/P and Thirteen are amazing, top of the line guitars that fully justify their price tags. For me, the Thirteen just about comes out on top thanks to the light weight body, resonance and extra choices of finish, but you would be very well served by either of these guitars that are really as good as it gets. The price needs to be looked at in terms of what some of the major brands are charging for instruments far less unique, sometimes nowhere near as carefully handmade and often a lot less exciting. The Excalibur Thirteen shows the thought and understanding that has gone into it at every level and as a result we actually think it's excellent value for money, despite what may seem like a high price. But be warned. If you try one, you will want one. Badly!