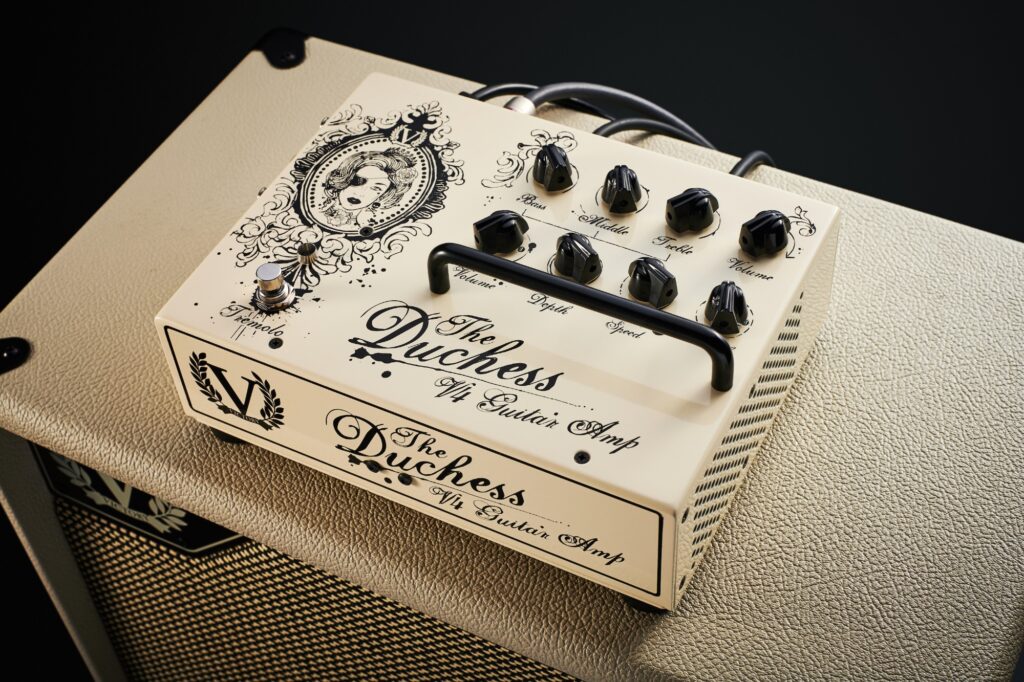 Victory's Duchess family of amps are some of the most popular "clean platform" amps in the world. With notable users including James Bay, Joey Landreth, Ariel Posen and GI's own Phil Short and Chris Buck, along with legions of blues/soul/roots players, pedal users and working pros. Part of what makes these amps so beloved is how well they take pedals, and the V4 Duchess represents the natural evolution of this: it's a Duchess amp that will fit on your pedalboard.

Weighing in at 1.7kg (or if you prefer, a little less than 3 Tube Screamers) and a footprint that's similar Victory's highly acclaimed V4 series of preamps, the V4 Duchess is easily the most portable amp in Victory's already famously travel-friendly range. It's also the most powerful amp they offer, boasting a crushing 180w of solid-state power (when running into a 4-ohm cab).

For a touring musician like myself, this is a game-changer. Travelling with a conventional amp head is laborious at best, and frequently not even an option (for fly dates, overseas touring, or in large cities where taking public transport to the gig is more common than you might think). Trust me when I say, it doesn't matter how good your pedals are - if the hired/house backline sucks, no combination of Klons, Kings Of Tone or Strymons is going to improve things. The V4 Duchess totally remedies this, since it'll fit in your gig bag or carry-on luggage and barely tip the scale.

It's also a great way to expand your rig if you've ever fancied trying stereo or wet/dry but the prospect of hauling a second heavy amplifier to the gig puts you off. If you're concerned about volume, don't be - I tried the V4 Duchess as the second amp in a stereo setup through a pair of 16ohm 4x12s, and the V4 Duchess was easily able to hang with my 100w Super Kraken up to brutal decibel levels, despite "only" putting out 45w into 16 ohms.

There are some additional benefits to a solid-state power section besides volume and weight though. Firstly, the response is fairly linear, meaning you get the same amount of compression and sag at any volume level - it won't fall apart at high volumes, and it won't sound anaemic at low volumes. Secondly, and perhaps more interestingly, the V4 Duchess and happily run without a speaker load. This means you can plug the line output straight into your audio interface, load up your favourite IR and record killer tones in silence.

Speaking of killer tones, all of this versatility, portability and power is worthless without great tones, and the V4 Duchess really delivers here. In a direct comparison with a V40, the V4 Duchess sounds remarkably close to its big sister. There's a little less power amp sag and more punch, but that's about it! The warm, full cleans and classy breakup are there in spades, and the onboard reverb and tremolo are very musical.

When it came to pedals, I tried very hard to "upset" the V4 Duchess, but it lapped up everything I threw at it. Mid heavy Tube Screamers stay articulate and clear, but flat-EQ distortions and scratchy fuzzes sound full and rounded. Running a V4 Countess preamp in the 4-cable method gave me a three-channel, 180w amp with reverb and tremolo, fits on a Pedaltrain JR with room to spare, and the board will still weigh less than the hard case it comes in. It's nuts.

The V4 Duchess packs all the tone of it's bigger sisters into an unbelievably portable format, while still offering more power than you'll ever need. Paired with your favourite drive pedals or one of Victory's V4 preamps and you can have any tone you'll ever need in a package that you can take anywhere in the world. I can see this little amp becoming very, very popular indeed.