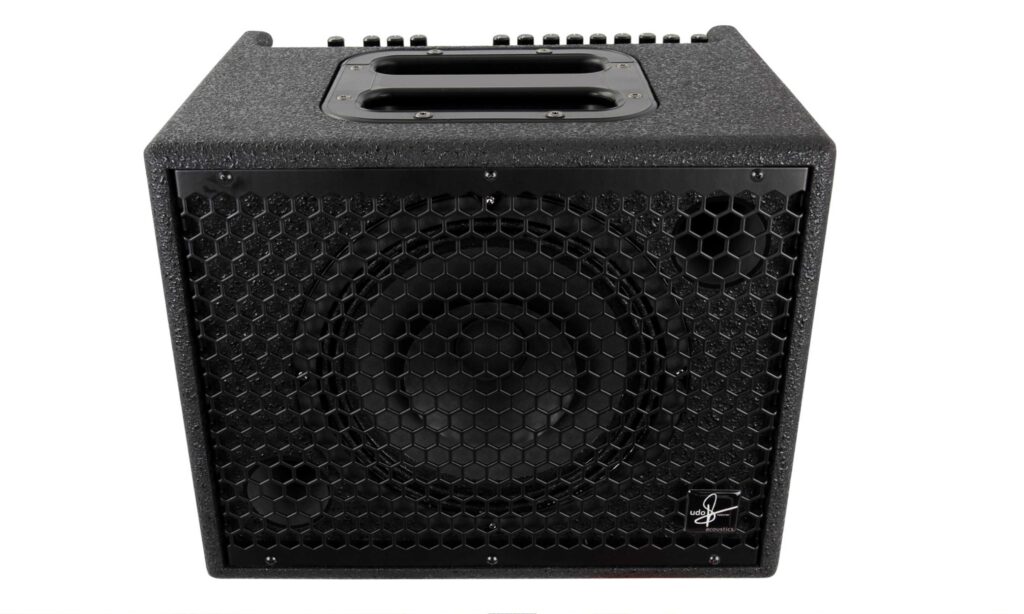 Udo Roesner, who has been designing acoustic instruments for over 30 years (and also known as the founder of AER Amps), has launched a new brand. The first model to introduce Udo Roesner Amps is Da Capo 75; a 2-channel acoustic combo equipped with custom-made 8-inch twin cone type speakers. Boasting 75W output power in a compact housing and six types of built-in effects, the Da Capo is billed as the ideal amplifier for acoustic instruments. Here is Nick Jennison to tell us more.

If you’re an acoustic guitar player and you don’t have an amp, you’re missing out. Too often, acoustic players place themselves at the mercy of the sound engineer - not a problem if you’re lucky enough to have a great engineer, but that’s not an everyday occurrence. Even then, the best sounding stage monitor mix can’t compete with the feel and control of a great acoustic amp. Even if you’re playing in settings that would traditionally be unamplified, a great amp can improve your playing experience immeasurably.

The Udo Roesner Da Capo 75 is a high-end two-channel combo from the mind of the man behind the original AER acoustic amps. It sports a class A/B design with 75 watts of power, a large output transformer and a carefully tuned enclosure for exceptional low-end punch and dynamic response.

There are two input channels that can be used simultaneously to amplify two instruments or one instrument and a vocal via the combined XLR/jack inputs on each channel, which also makes it a great choice for upright bass, electric violin/cello and a variety of acoustic instruments. Each channel has a gain (read: volume) control and a three-band centre-notched EQ. The EQ is quite powerful, but not so powerful that it’s problematic - often times extremely potent EQ on acoustic guitar is an invitation for players to cause trouble for themselves. Channel 1 has a “tone” button that engages a pre-set EQ curve that is very flattering for acoustic guitars, while channel 2 has a high-pass filter in its place.

The master section has a selection of three reverbs and three different pre-set delay times, with an overall level control and a (slightly confusing) pan control that allows you to bias the effect blend between the two channels. It works well once you figure it out, but why there’s a global effects level and a pan instead of just having a level for each channel, I don’t know. The quality of the reverbs are the first rate though, and they’re great for adding everything from a touch of ambience and smoothness to a rich, symphonic depth.

Sonically, the Da Capo 75 is fabulous. Instead of PA-style flat response, the Da Capo is tuned and textured in a way that flatters acoustic guitars really nicely. There’s a relaxed midrange that isn’t honky or pokey, and the lows are rich and punchy without being uncontrollable. The dynamic response is excellent too, communicating the nuances of your playing precisely without being punishingly over-dynamic (in that way that plugging into a PA can often be). It’s equally well equipped to handle acoustic bass (thanks to the low-end power) and even jazz guitar.

If you’re serious about your acoustic playing, you should absolutely check out the Udo Roesner Da Capo 75. It’s not cheap, and it’s a little heavier than many of its competitors, but the sound is second to none.