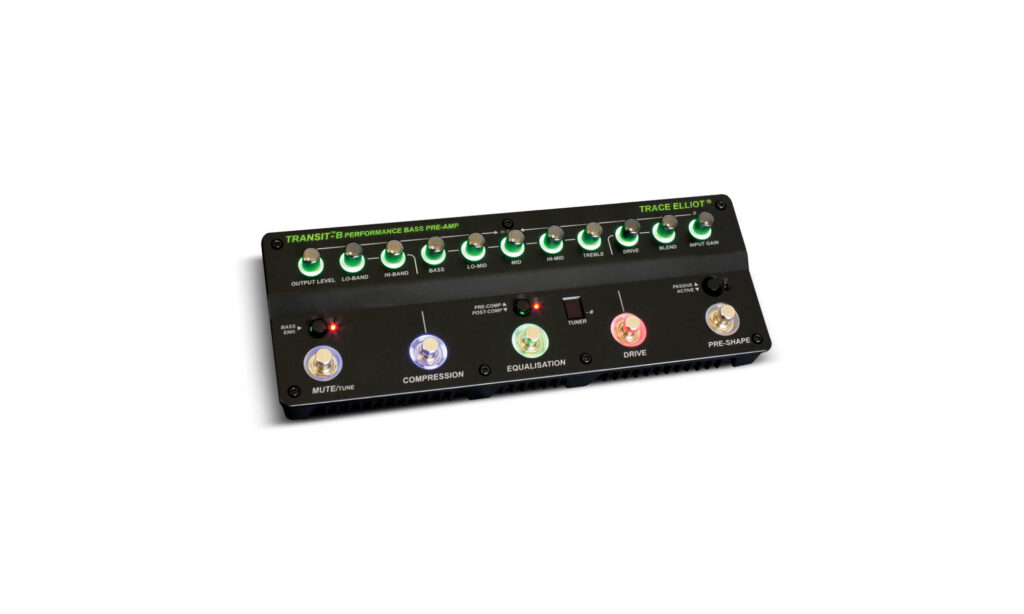 In the late 70s and throughout the 80s BC Rich was the weapon of choice for many of the rock co-gnoscenti, who chose the instruments not only for their outrageous looks but the luxurious build quality and high-end appointments

Can drive a power amplifier alone

Absolutely none I found

The Transit B and its cousin for acoustic guitar, (the Transit A) are floor based preamplifiers with a host of features that are not only useful for both the recording and performing artist, but even for the ‘at home’ player who has to keep the volume down, but maintain great tone. Here's Dan Veall with more detail.

Trace Elliot is a world-class brand name that you should know. Some of our favourite bassists are well known for their long relationships with the brand. Doug Wimbish, a friend of Guitar Interactive, springs to mind and it was my pleasure to interview him in a previous issue.

You could easily see a Transit B as the preamplifier section of any of the high-end Trace Elliot Bass amplifier heads we have come to appreciate over the years. Of course, given the diminutive frame of this all metal cased tone machine, Trace Elliot’s full 12 band graphic equaliser has been distilled down to just five bands of active equalisation. That said, I think the bands are chosen well, and there’s plenty of boost and cut available.

So, into the jack socket on the back of the device, the signal runs to the Input Gain control. You’ll note that all the knobs have rings around them that are lit when a particular function is engaged. I think this ‘halo’ is useful indeed for lighting the way to the dial, but later we’ll find that these indicated to the level of the signal nearing peak and later the onboard tuner makes use of all of the halos for probably one of the clearest tuners I’ve seen for a while!

Each section of the pre-amplifier is engaged with the push of a clearly labelled foot switch, and each of those also has a coloured ring around it that lights too. Love it!  On the right-hand side, the first engages Trace Elliot’s famous pre-shape, a built-in equaliser curve that has found its way on to I suspect every Trace amplifier from the beginning. The Transit features a gain pad marked ‘active/passive’, but in reality acts like an attenuator/pad should you plug in particular high output instruments - interestingly, I really didn’t need the pad with my own bass whose electronics are known for being pretty high output! So, there you go, this thing has headroom out of the box!

As I mentioned in my video, I am usually wary of ‘effects boxes’ that mention drive or distortion. I have to admit that I am really fussy about what I hear coming out of the speakers. I hope that what you hear is the same as the tones I was getting in the studio. To put it simply, I really liked this drive. To my ear, it seemed to be either a band pass type drive or that the lows have been rolled off before going into the saturation part of the circuit. This works for me. My favourite drive pedals do the same. This leaves room for the low end from the blend to add the weight back in to the sound rather than just sound bloated or stodgy. Great work here Trace. There’s tons of gain available should that be your bag, but the drive does wind back to a mild grit too. That’s refreshing.

Next door, the afore mentioned 5 band Equaliser is active. I found it useful to blend the drive but activate the equaliser to tailor the response curve. That really brought things to life in the studio.

Have a look at my video as I go into detail regarding the compressor on board, but essentially we have a unit that effects your low end and top end separately meaning that you have dynamic control over and balancing of your frequency spectrum. Great for keeping your top end sparkling when you are slamming the low end for example. (No pumping artefacts)

Rounding up, in case you didn’t already have enough bass boost, there’s a bass processor on board for extra low-end depth, There’s a button right next to the mute footswitch to engage the function. When you are ‘muted’, again, there’s a foot switch for that; the onboard tuner is engaged too. There’s a display for the actual note you are on, but a feature I really love is the way that all of the lit rings around the dials turn in to part of the tuner’s display. Great when you are looking down on to a dark stage.

Finally and output level which has plenty of boost on tap.

Round the back of the pedal, all connections you are likely to need: A line in and headphone output for silent practice with an MP3 player, or I suppose the headphones out could feed a personal IEM monitor.  Transit-B has a ‘dry output’ socket for sending your unaffected bass tone to other devices. Transit features two separate XLR sockets for DI output. One again for your dry bass tone. The manual conforms that the signal at this output is not affected by any preamplifier controls. The other however is - all that processing can be fed on to PA or external power amplification. Speaking of which, there are two unbalanced output sockets too! One is an ‘instrument level’ output for feeding in to the front input of a bass amplifier, the other a much higher output ‘line level’ socket. This is ideal when using this pedal as a standalone preamplifier plugged in to the input of a PA power amplifier or the effects return of another amplifier thus bypassing the onboard controls in favour of those on the Transit-B* (Read the manual in this case as there are some amplifiers where this is not possible and outside the scope of this review) 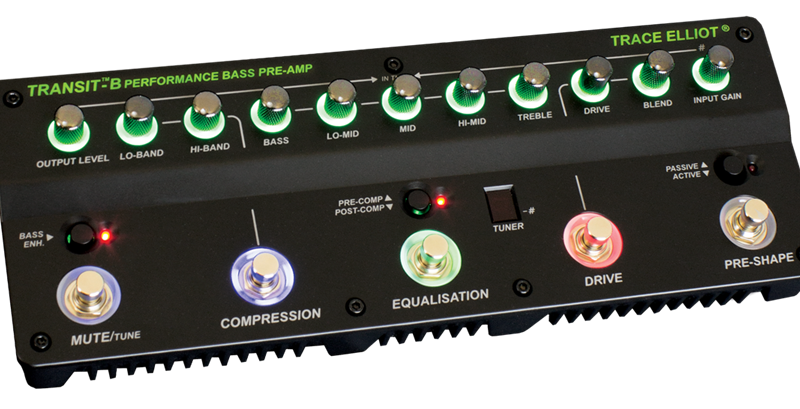