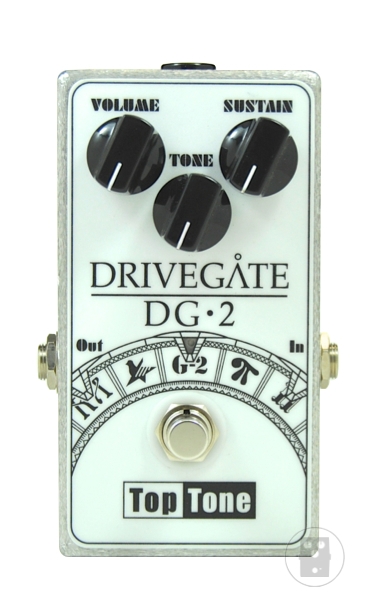 Top Tone describes the sound of this pedal as reminiscent to a Rat, with a hint of the Big Muff Harmonics mixed in. I personally felt I could get a pretty decent Tube Driver sound from it as well. Think Gilmour or Eric Johnson and you’re not far off.

Not just for DG fans
But essential if you are!
A great fuzz box

Can be hard to find
Not cheap

If you were impressed by Jamie Humphries' Tone on a Budget feature on David Gilmour but want to get just that little bit closer to the source, there's always the Top Tone Drive Gate DG 2, a hand built fuzz from Brazil. Not only does it offer a damn fine Gilmour impersonation but it could just be the perfect all-rounder.

As much as I love fuzz, to my mind it can sometimes be the 'Marmite' of drive pedals - you either love it or you hate it! Don’t get me wrong, I have several fuzz pedals, ranging from an original '70s Muff that I bought in 1981 for £5, Wampler Velvet fuzz, and MRX Slash fuzz; so, yes, I like fuzz. But some fuzz pedals can sound harsh, overly compressed and, frankly, pretty nasty. Hendrix always had an aggressive fuzz tone, while the likes of Eric Johnson and Gilmour had a much richer tone; although some of Gilmour’s earlier recordings had a much harsher, abrasive sound.

Gilmour has had a long association with the Big Muff, being introduced to the pedal by his newly hired guitar tech Phil Taylor in the early/mid '70s. Taylor. From that point started commissioning custom-built boards by effects guru Pete Cornish. Gilmour then used a variety of Big Muff pedals, some modified by Cornish. He also started using Cornish’s own fuzz pedals, the P-1 and the P-2, which feature circuits based on Gilmour’s favourite Muff pedals. For the Gilmour fan, Gilmour’s fuzz tone is the Holy Grail of tones, from harsh biting fuzz of “Time”, to the natural rich warm fuzz of “Animals”, and let’s of course not forget the modulation and delay soaked rich fuzz of “Comfortably Numb”!

Like any revered guitar tone, guitarists are always keen to emulate it. I had this task laid before me when I joined the Australian Pink Floyd show for two long American and South American tours some years ago. I went to great lengths to hunt out equipment that would help me replicate these hallowed sounds. It was on a show in Brazil that I was introduced to the pedal building skills of Olmar Garcia. Olmar produces very high quality pedals, all constructed by hand by himself under the name of Top Tone. So I began using the Drive Gate DG1, Top Tone’s first pedal; A fantastic fuzz based on circuit of the Big Muff’s of the '70s. Like the Cornish, the DG1 features many refinements and a much improved tone circuit. I not only introduced the DG1 to my live rig, but it was also heavily featured on several Lick Library Gilmour/Pink Floyd DVDs. My good friend David Kilminster, guitarist for Roger Waters, was so impressed with mine that he added one to his board.

Following the success of the DG1 amongst Gilmour purists, Olmar set about producing Drive Gate fuzz to his line, resulting in the Drive Gate DG2.  The DG2 is unlike the DG1, as it’s not a fuzz in the traditional sense, and although it's based around the classic Big Muff circuit, the DG2 delivers a much thicker warmer, almost valve like crunch. The construction of the pedal resembles the DG1, using on the same reinforced aluminium case, and features three rotary controls, volume, sustain and tone.

The graphic front covering includes a high intensity LED, which is also low consumption. The front of the pedal boasts a sturdy on/off stomp switch, and when turned off the pedal is true bypass. This pedal is totally hand wired, and is constructed from individually selected and tested germanium components.

Top Tone describes the sound of this pedal as reminiscent to a Rat, with a hint of the Big Muff Harmonics mixed in. I personally felt I could get a pretty decent Tube Driver sound from it as well. Think Gilmour or Eric Johnson and you’re not far off.

The DG 2 has a great dynamic range; lower the sustain control for crunch rhythm sounds, and boost it for power distorted lead tones. I also found the pushing the volume of the DG2 drove the front end of my Boogie King Snake harder, so many different types of drive are achievable with this pedal. The tone control is exceptionally well voiced; there isn’t an unusable position on the dial! Boost the tone and back off the sustain, and I achieved some old school rhythm drive sounds reminiscent to “Time” and “Money”. Keeping the tone boosted and drive the drive the sustain and you’ll achieve a convincing “Time” solo tone. For me the pedal really comes into its own with the tone set between 11 and 12 o’clock resulting in a thick smooth overdrive, ideal for those “Comfortably Numb” moments.

Although the DG 2 has been called a Cornish G-2 clone, I feel this pedal has a personality of its own. The fact the Mike Matthews, who created the Muff, gives Olmar his blessing with these pedals says a lot for the build and tonal quality of this product. Pricewise this pedal is more expensive than mass-produced fuzz, but let's not forget that just one man builds this pedal by hand, so you’re getting something very special with a Top Tone pedal.

I love this pedal, and have used the DG1 and DG2 for a number of years. If you’re in the market for a boutique fuzz that will achieve the perfect Gilmour tone and more, then check out the DG 2.