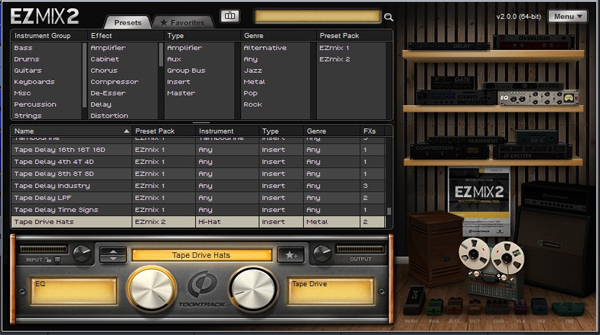 It seems strange to think that I’ve been avoiding Toontrack’s EZmix software for almost five years now. I have, and regularly use, their EZdrummer and EZkeys virtual instruments, but EZmix always seemed like a bit of a step too far.

In case you’ve never seen it, the basic idea of EZmix is to provide processing presets for a range of common mixing needs. Now on version 2, the scope includes add-on packs for specific processing types (distortion, reverb etc.), instrument targeted processing (drums, guitar, vocal) as well as mastering presets for your whole mix, guitar amp simulators, named mixer/producer packs (Chuck Ainlay, Neil Dorfsman, Peter Henderson and more) and genre packs including Indi and Metal. All in all, I’m pretty sure I could take a mix from raw recorded tracks to mastered ready-for-release state, but would I want to?

EZmix works as a standalone programme or as a plugin with a host DAW. The main interface is a list of presets from the main EZmix package plus any additional expansion packs that you have installed. You can browse or search the list by name, preset pack, target instrument, genre, type (insert or send), producer and a couple of others, and you can also use filters and save favourites, so it’s reasonably easy to navigate the huge list that it’s very easy to accumulate. One mystery of the interface (to me at any-rate) is why I can’t make such a data-rich window bigger than its standard size for ease of use?!?

Alongside the browser is a graphic window that shows you what effects you have in your selected preset, and below it is a control panel where you can make minimal adjustments - you always get input and output level controls, plus a pair of preset-specific knobs that adjust one or more parameters depending on the preset. On the standalone version you also get a separate window which has a “rack” where you can add or remove presets from your processing chain, and set master levels.

Now I’ve written about the pros and cons of presets elsewhere in this issue of Guitar Interactive magazine, and the same set of concerns applies to EZmix as to most other tools. The big difference is that serving presets is basically all that EZmix does. That cute graphic on the right hand side of the screen may show you some boxes on shelves and some pedals on the floor, but it isn’t showing you how the compressor’s attack and release controls are set. Sure, you can tweak a bit, but that’s it (for example, the Acoustic Guitar preset has EQ and compression modules - you get one knob marked “Compression & EQ” to play with).

This needs a bit of a re-think from the normal practice of selecting and setting-up a processing chain made of discrete plugins. The clue is - as with all the products in the EZ range - in the name. EZmix is designed to let you get a sound and move on, the interface isn’t there to help you to learn by studying the finer points of the preset values but to avoid option-anxiety. You use the browser or filter functions to narrow-down the number of presets in your list, then you step through them until you find something suitable - tweak it if you need to, then move on to the next thing. There are a lot of presets available (it’s very easy to see a new pack advertised and go into collector mode), and it’s pretty rare that I couldn’t find something at least close to what I wanted, even on the whole-mix “mastering package” presets. Once that idea settles, EZmix starts to make a lot more sense.

If you’re an engineer with a decent idea of how to work your way around a studio or DAW, then you may be a bit frustrated by the lack of some basic facilities such as host sync for time effects and compression release, and metering; and when you find a really great sound and you can’t figure how to reproduce it. For the musician who isn’t particularly interested in learning engineering skills (and there’s nothing wrong with that) and who just wants to get their music to sound produced, then EZmix can be a big help. How good the presets sound is largely a matter of how well you choose, and there’s no easy path to taste, but there are options here that sound superb (and worse, that took me years to learn how to achieve manually). A bunch of presets is really never going to replace the judgement of an experienced Mix or Mastering engineer, but for its clearly declared audience I’d have to say that EZmix2 is very good. I honestly wish there was a sort of “advanced” or perhaps a “Slightly-EZmix2” available, but in the meantime I will be keeping it installed for the odd occasion when I might need a little help from Andy Sneap.

To sum up: it does what it’s designed to do very well. As always, you need to make sure that’s what you want.